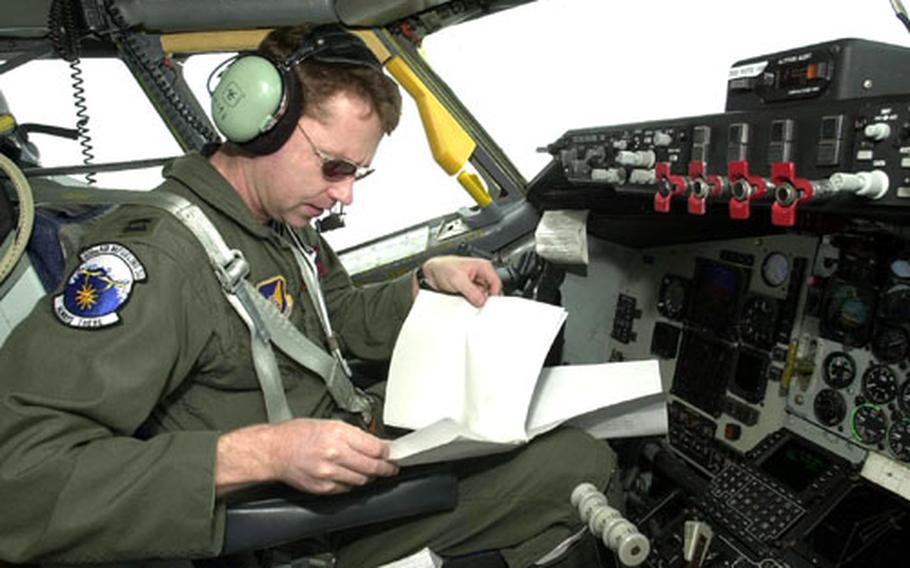 Capt. Rusty Evers checks over paperwork while his KC-135R tanker flies on autopilot 21,000 feet over the Sea of Japan Tuesday. He was flying an air refueling mission for American and Japanese fighter aircraft flying in the Cope North exercise. (Wayne Specht / S&S) The hand of 1st Lt. Jeff Guttman adjusts engine throttles in the cockpit of a KC-135R tanker flying over the Sea of Japan during Cope North exercises Tuesday. (Wayne Specht / S&S) A Japanese Air Self-Defense F-15 Eagle fighter approaches the refueling boom of a KC-135R 21,000 feet above the Sea of Japan Tuesday during the Cope North exercise. It marked only the second time Japanese fighters practiced air-to-air refueling with an American forces tanker. (Wayne Specht / S&S) 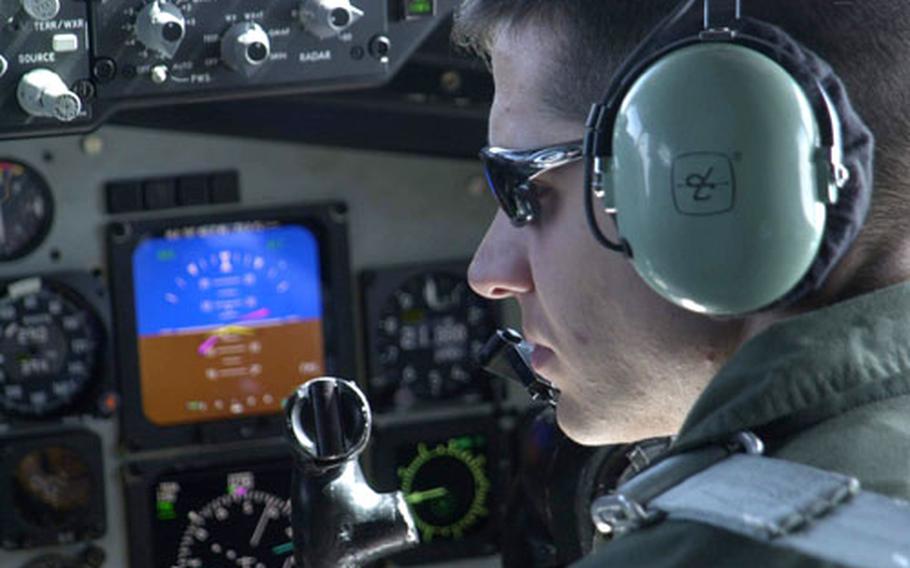 1st Lt. Jeff Guttman keeps his eyes on readouts and dials in the cockpit of a KC-135R tanker flying over the Sea of Japan Tuesday during Cope North exercises. (Wayne Specht / S&S)

ABOARD TORA 61 OVER THE SEA OF JAPAN &#8212; Thirteen years before Capt. Rusty Evers was born in 1973, the four-engine KC-135R tanker aircraft he now pilots rolled off the Boeing Co. assembly line.

As missions changed over the years, the tanker has been modified with newer engines, each producing 22,000 lbs. of thrust, and enhanced avionics systems eliminating the need for a navigator. The Air Force accepted the last KC-135 in 1965.

Aimed at honing Japanese and U.S. air operations, Cope differs from other such exercises. &#8220;We&#8217;re using English as a common language on our radio frequencies,&#8221; said Capt. Richelle Dowdell, Cope North spokeswoman. &#8220;Japanese pilots selected to take part in the exercise had to pass an English test.&#8221;

Another difference: Three-member Japanese and U.S. controller teams are flying aboard each other&#8217;s AWACS planes. &#8220;It allows us to practice direct and advisory control of fighter aircraft in the skies,&#8221; Dowdell said.

And for the second time, a U.S. tanker will refuel Japanese F-15 fighter aircraft in mid-air. It&#8217;s to prepare Japanese pilots for Cope Thunder, another air combat training exercise set for Alaska later this month.

The U.S.-Japan cross-training requirement began in earnest April 21 when, for the first time, a 909th tanker refueled JASDF fighter jets over the Pacific Ocean. Tuesday, over the Sea of Japan, four JASDF F-15 pilots again took turns topping off their tanks from Evers&#8217; $56 million tanker as it flew at 360 miles per hour.

Also aboard is Chief Master Sgt. Greg Durand, only boomer of that rank in the Pacific Air Force. He&#8217;s been with the 909th for six of his 26 years in the Air Force. &#8220;We fly a very dynamic mission out here in the Pacific,&#8221; said Durand, who began his career as a mechanic working on the now-retired F-4 Phantom fighters.