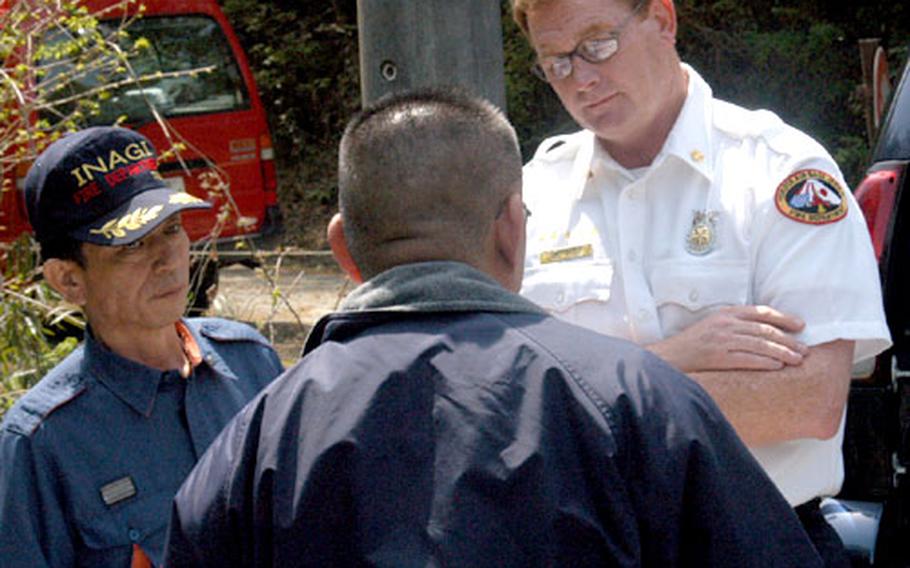 TAMA HILLS RECREATION CENTER, Japan &#8212; A trucker hauling 50 pounds of fertilizer and pesticide ran off a narrow, steep road Tuesday after a 5.6-magnitude &#8220;earthquake&#8221; on the Kanto Plain, spilling chemicals into a ravine.

For the dozens of U.S. and Japanese emergency personnel who responded, it was only a test.

&#8220;This allows us to prepare and train airmen for possible contingencies that could happen anywhere, anytime,&#8221; said 1st Lt. Warren Comer, a Yokota spokesman.

&#8220;There&#8217;s always a possibility this could affect something on a larger scale. We have to ensure that all is safe with the ground and water supply. That&#8217;s why they take such prudent measures out here.&#8221;

Tuesday&#8217;s rehearsal was aimed primarily at sharpening the two sides&#8217; coordination should a real disaster occur, officials said. While bioenvironmental personnel were sent from Yokota to complete the required sampling and evaluation steps, cleanup procedures were not practiced.

After the &#8220;911&#8221; call reached Yokota&#8217;s command center, base officials notified the Inagi City Fire Department, which handled the initial response. Its members cordoned off the area and isolated the spill, ensuring the chemicals didn&#8217;t immediately disperse into the water supply.

Mark Lawler, fire chief for Yokota&#8217;s 374th Civil Engineer Squadron, arrived a short time later for a site survey. He collected information from Inagi fire officials and reported to the disaster control group, a cluster of base units that was to determine the size of the secondary response. The group has elements from contracting, safety, security forces, civil engineering, bioenvironmental, legal, transportation and public affairs.

Master Sgt. Derrick Joe, assistant chief of training for Yokota&#8217;s fire department, was among those who formed the base&#8217;s exercise-evaluation team. Evaluators wanted to see how well the Inagi City and Yokota fire departments &#8220;work together as a team,&#8221; he said. &#8220;They look at the best ways to utilize each other&#8217;s resources &#8212; the manpower, tools and equipment to help clean up the spill.&#8221;

Yokota officials would be in charge of any emergency scene, he added. On Tuesday, evaluators monitored that transfer of command.

Joe said they look at four specific segments of the base&#8217;s response: site control, safety precautions in handling chemicals, potential dangers in the vicinity and whether cleanup personnel have the proper protective gear.

Hazardous materials &#8220;were the focal point of the exercise, but it wasn&#8217;t necessarily the main objective in the evaluation,&#8221; said Master Sgt. Dean Riewald, also of the fire department&#8217;s training section. &#8220;The bigger picture was getting all the other agencies involved to exercise their portion of a larger scenario. All the different support agencies hold a piece of this puzzle.&#8221;