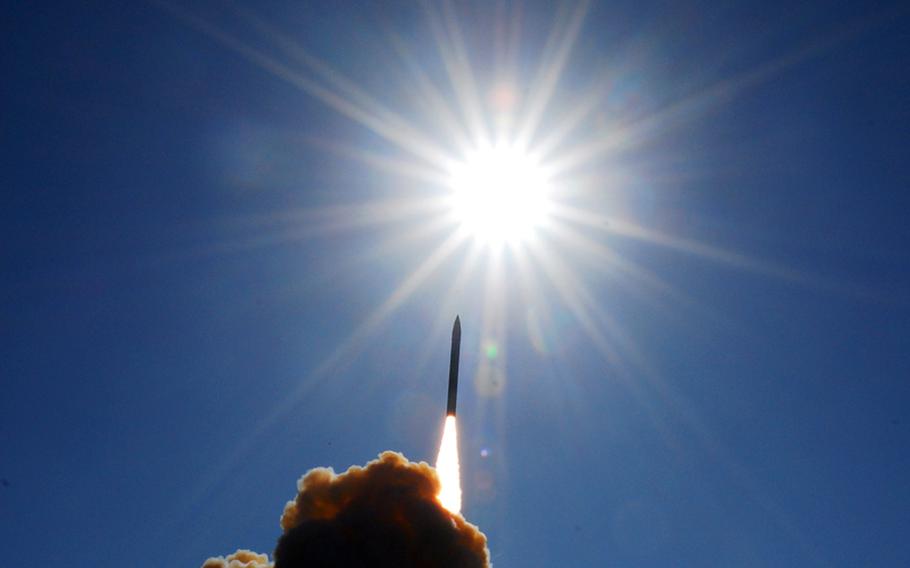 A ground-based interceptor lifts off from Vandenberg Air Force Base in 2008. The missile successfully intercepted a long-range target launched from Kodiak, Alaska. (Joe Davila/U.S. Navy)

STUTTGART, Germany &mdash; The Defense Department has failed to develop requirements and standards for integrated ballistic missile defense training that requires organizations to work together &ldquo;as they would in an actual engagement,&rdquo; according to a report by the Government Accountability Office.

&ldquo;Without an overall strategy that includes requirements and standards for integrating training, DOD runs the risk that the organizations that need to work together may have limited opportunities&rdquo; to do so realistically, the GAO stated in a report released late Monday.

The GAO review is the latest in a series of probes into the costs and technical challenges associated with the military&rsquo;s missile defense program. Earlier this year, the GAO pointed out shortcomings in the Defense Department&rsquo;s costly acquisition process and highlighted a lack of long-term cost estimates for missile defense. The agency also reported that DOD&rsquo;s implementation of the European Phased Adaptive Approach missile defense plan faces potential cost overruns because of insufficient oversight during the acquisition process.

Since 2002, the Pentagon has spent more than $80 billion on developing and fielding a Ballistic Missile Defense System that relies on a mix of land- and sea-based elements.

&ldquo;Since the time available to intercept a missile is short, integrating training among all organizations involved is important to connect seams where commands and elements must work together,&rdquo; a summary of the report said.

The GAO recommends that DOD:

&bull; Develop an overall ballistic missile defense training strategy that includes specific requirements that resolve any gaps in capabilities and bolsters integration among commands. A single authority should be designated to develop the plan.

&bull; Direct the service components and the Missile Defense Agency to set a deadline to conduct a cost estimate for future training needs.

&bull; Establish procedures that require annual reporting of the total ballistic missile defense budget, which currently is disjointed and divided up among various commands.

The GAO found significant gaps between training requirements and budgeted resources. For example, $4 billion has been planned for ballistic missile defense training from 2011 to 2016. Yet a $300 million requirement in the Terminal High Altitude Air Defense program was not included in the Missile Defense Agency&rsquo;s budget plans, according to the GAO.

In its formal response to the report, the Defense Department generally agreed with the GAO&rsquo;s findings. DOD, however, did not commit to a timeline for implementing the recommendations.

&ldquo;Considering that funding for training could face significant budget pressures amid the department&rsquo;s competing demands for current operations, acquisitions and personnel expenses, we continue to believe it is important that DOD implement the policy for developing and reporting cost estimates for ballistic missile defense training as soon as possible,&rdquo; Pendleton wrote in his report.

Uncertainty about the viability and full cost of missile defense initiatives has prompted some defense analysts to question whether the project is worth the investment. Lawrence J. Korb, a senior fellow at the Center for American Progress in Washington, argues that missile defense should be a prime target for defense spending cuts.

&ldquo;[C]ancelling select costly and technologically challenged missile defense programs administered by the Missile Defense Agency and the armed services could reduce spending by another $1.31 billion per year,&rdquo; according to a paper co-authored by Korb earlier this month.