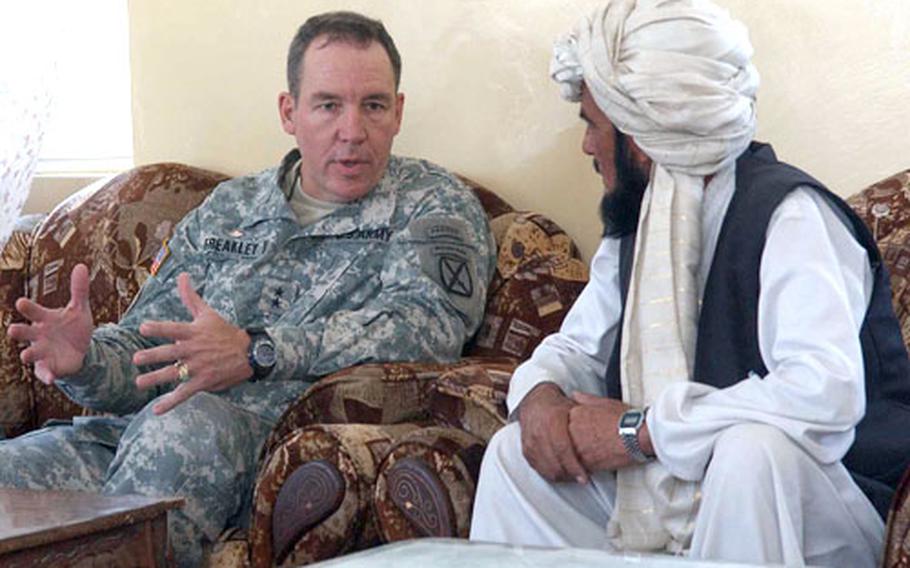 ANDAR DISTICT, Afghanistan &#8212; The Americans had come in peace, at the request of the government. They were there to help, the U.S. general told the 200 or so Afghan men seated before him.

On his second trip in three days to the village of Miri, district seat of Andar, Maj. Gen. Ben Freakley, operational commander for U.S. and NATO forces in Afghanistan, told the Afghan men that if they did their part, his troops would help the Afghan federal and local governments do theirs.

Some $3.5 million worth of construction projects are planned for the remote but strategic region, which, Freakley acknowledged, had been largely ignored by the U.S. and the Afghan governments.

&#8220;We are a very powerful force,&#8221; Freakley continued, addressing the men through an interpreter. &#8220;You know we have jet airplanes and helicopters. We might inadvertently attack your home. This mistake will not happen if you keep the enemy away from your homes and your villages.&#8221;

If they did that, he said the future was bright: &#8220;A future with roads, mosques, clinics, improved agriculture, schools and anything you want for your people.&#8221;

But the men of Andar, a poor conservative province where girls don&#8217;t go to school and women are rarely seen outside, said they had heard promises before. Afghan officials had promised all sorts of things and fulfilled nearly none, while the police who were supposed to protect them robbed and disrespected them.

After the shura, authorities sent away the police that the local men had accused of corruption, although the provincial governor, who&#8217;d been flown in for the shura, had said that they must get their accusations down in writing.

Improving Andar and the rest of the country will take time, patience and diligence, Freakley said. &#8220;There are no quick fixes in a country as hard hit as Afghanistan,&#8221; he said. &#8220;What you want to see is steady progress.

Yes, the Afghans murmured in reply.

Freakley said the U.S. strategy to win peace for the country relied on three things: security, governance and reconstruction.

In Andar, as part of a U.S. offensive throughout the eastern portion of the country that could last until Ramadan or longer, military officials believed they could rout a Taliban force of unknown size to provide security, then use their influence to bring in a new district chief and new police for better governance. Finally, they would start construction on a number of projects.

But the fighting never happened, and Lt. Col. Chris Toner, commander of the 2nd Battalion, 87th Infantry Regiment, told Freakley that in his previous visit to Miri &#8212; when the general tossed soccer balls to village boys on the way to his Black Hawk &#8212; he sensed the combat mission had somehow been compromised. However, many Taliban had been there were now elsewhere.