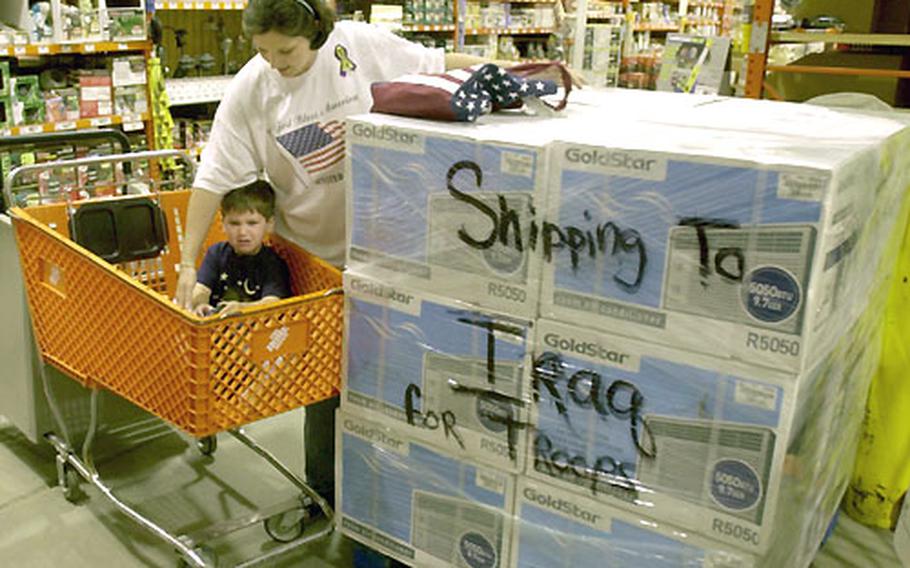 Frankie Mayo and her two-year-old son Devin at a Delaware Home Depot store, where she bought a pallet full of air conditioners to send to troops in Iraq. (Bob Herbert / The News Journal)

The Delaware mother of a soldier stationed in Iraq, Mayo received an e-mail from her son in June. Cpl. Chris Tomlinson of the Army&#8217;s 300th Military Police Company wrote:

&#8220;Hey mom, yeah i am okay it is hot as hell here. last week the temp reached 143 my platoon said they would be very grateful if you guys sent us air conditioners.&#8221;

She set up &#8220;Operation Air Conditioner,&#8221; and thus far has shipped 85 A/C units and countless boxes of food and water to servicemembers serving in a hot, dry and desolate land.

She has another 152 units in the pipeline, and donations are pouring in to her Internet site, http://mywebpages.comcast.net/frankiemayo/

Despite the e-mails from grateful soldiers and the media attention Mayo has received, she thinks her efforts are &#8220;no big deal.&#8221;

Her patriotism has moved her to set up a &#8220;family-run&#8221; organization that has thus far enlisted the help of Home Depot, which donated 20 units; her local volunteer fire department, whose members help her box items; the Bear, Del., post office; and her brother Steve Nichols, who owns Nichols Excavation and offers the company&#8217;s heavy equipment when big shipments need to be moved.

Until recently, her 10-year-old daughter, Olivia, was her Webmaster. Things have gotten so crazy that Mayo needed to farm that out.

After appearances on shows such as &#8220;Good Morning America&#8221; and the &#8220;Today&#8221; show, Mayo realized that her message might not be reaching the troops in the field. So she e-mailed Stars and Stripes.

Some have been e-mailing her with requests, others with support and gratitude. &#8220;You are the best!&#8221; wrote one soldier. Most ask her what the can do for her.

Why does she do it?

Mayo believes that a good deed is its own reward.