Cooking school shares secrets with base chefs at Atsugi 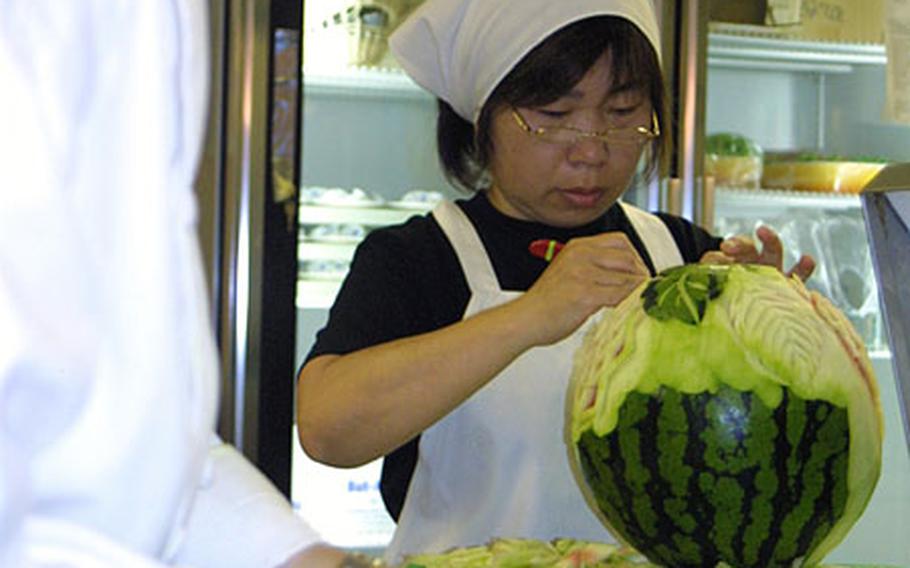 During a two-week visit to Atsugi Naval Air Facility, Japan, chefs and instructors from the famed Culinary Institute of America volunteered to help spice up the fare at base restaurants.

&#8220;So that the people who live on base can get a little more interest in their food,&#8221; said Lynne Gigliotti, a lecturing instructor from the institute, who teaches skills development &#8212; using a knife, creating stocks and other basics.

The visit is sponsored by Morale, Welfare and Recreation and has been going on at Atsugi for years, said Paul Savarese, clubs coordinator. Yokosuka Naval Base adopted it last year and is hosting a similar visit this week.

Gigliotti and three other chefs along with a service manager donated their vacation time to come to Japan.

They prepared themed dishes during the week, allowing base cooks to learn new techniques.

During the visit, the chefs taught using special-themed meals, which then were served at the Officers Club. They prepared a Southern and a Southeast Asian lunch early in the week, and held a cooking demonstration for the community Thursday.

At Yokosuka, the chefs prepared a French gourmet and an Asian Fusion lunch along with a community demo.

The Southern lunch was new to some base employees.

The chefs also taught basic food preparation techniques and fundamentals such as soups, stocks and sauces.

She taught employees how to build dishes upon each other, using a simple dish such as a stock for something else, for example.

Gigliotti is planning a Mediterranean meal for a special party on Friday for the base commander. The visit then tops off Saturday with a Polynesian luau, followed by a free performance by a 17-person Polynesian band from Hawaii on the O Club patio.

Gigliotti said the visiting chefs enjoy helping the military and getting a chance to see and taste new foods and dishes while here in Japan. They visited the Tsukiji fish market and marveled at impossibly perfect Japanese produce.

The chefs preordered ingredients for the dishes they were preparing and surprised Japanese club employees with one item: peaches at about $5 a pop.

Savarese said he hopes the visit taught his cooks new ideas, how to be more efficient and provided them a new confidence, &#8220;to hopefully raise the bar a bit.&#8221;