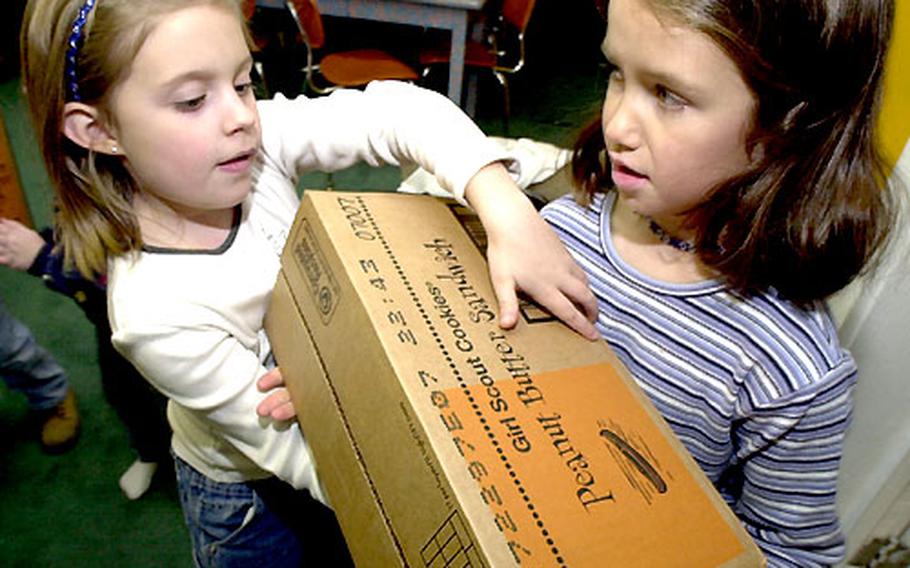 Ah, the deLites of rank.

He bought one box of each type of cookie on Jan. 3, said Candy Johnson, overseas committee chair for Seoul &#8212; including Caramel deLites, the perennial favorite formerly called Samoas.

For the rest of U.S. servicemembers in the Pacific, cookie sales begin Friday.

More than 100,000 boxes of Girl Scout cookies made their way to the Pacific in the past week in time for the group&#8217;s annual cookie sale. Proceeds will support Girl Scout activities worldwide, including those of Pacific-area troops.

Plenty of the favorites, including Caramel deLites and Thin Mints, soon will be available on bases across mainland Japan, Okinawa and South Korea. Okinawa will get 54,288 boxes; South Korea, 31,800; and mainland Japan 61,920.

Girl Scouts have sold cookies in the United States for about 65 years but have been selling them in the Pacific just since the early 1990s, said Carol Hunt, director of membership and marketing for Girl Scouts Overseas-Okinawa and Korea.

And rules for selling them on Pacific bases are a little different.

Rules regarding workplace conduct prevent parents from selling cookies in offices, she said. Cookies may be sold door-to-door off base if local laws allow, U.S. Forces Japan said in a written reply to a Stars and Stripes query.

Some bases, such as Camp Zama, also will allow limited door-to-door sales. The girls will be knocking on doors there, and at housing areas at Sagamihara and Sagami Depot, on Saturday.

And the Girl Scouts set up shop at most local exchanges to take on hungry customers.

But even with limits on door-to-door and office sales, Johnson said, Pacific Scouts still have had no problem selling their entire stock each year.

Johnson said the Scouts also are pitting the services against each other Saturday: From 2 to 4 p.m. the Dragon Hill Lodge will host a Cookie Crunch competition. Teams of four servicemembers each &#8212; and a team of Dragon Hill employees &#8212; will put their appetites to the test in a cookie-eating contest to kick off the beginning of the two-month sale season, Johnson said.

She predicts the Army will take home the trophies because they have the &#8220;home-court advantage.&#8221;

Johnson said Seoul-area Scouts also are collecting donations so they can send cookies to soldiers stationed in Afghanistan. The cookies will go to soldiers with the 559th Quartermaster Battalion, from Hunter Army Air Field, Ga. The soldiers &#8212; from Johnson&#8217;s former unit &#8212; now are at Kandahar.