Convoys will now stand and fight when attacked in Iraq 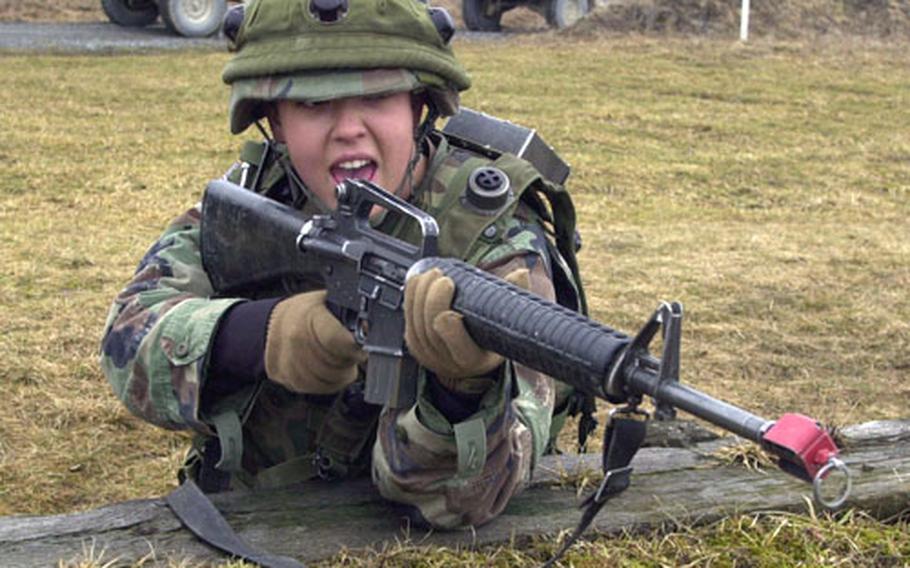 A soldier from the 141st Signal Battalion’s Company C fires blanks during convoy training at Grafenwöhr on Thursday. Under a change in Army tactics, soldiers who come under attack while on a convoy, will now stand and fight the enemy instead of shooting and pressing on. (Seth Robson / S&S)

A soldier from the 141st Signal Battalion’s Company C fires blanks during convoy training at Grafenwöhr on Thursday. Under a change in Army tactics, soldiers who come under attack while on a convoy, will now stand and fight the enemy instead of shooting and pressing on. (Seth Robson / S&S) 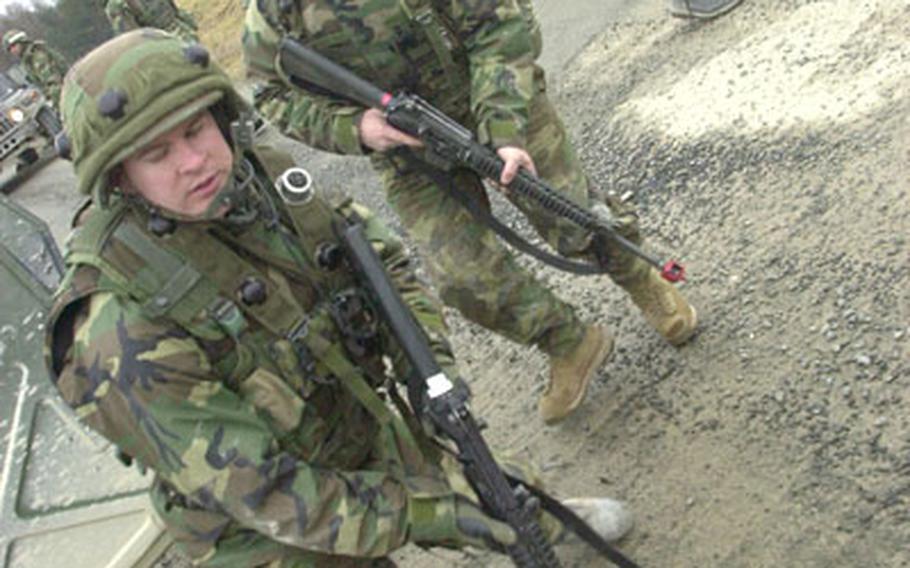 Soldiers from the 141st Signal Battalion&#39;s Company C respond to a simulated attack on their convoy at Grafenwöhr on Thursday. (Seth Robson / S&S)

GRAFENW&#214;HR, Germany &#8212; In a change to Army tactics, U.S. soldiers will stand and fight instead of shooting and pressing on when their convoys are attacked on Iraqi roads, according to Harvey Perritt, spokesman for the Army&#8217;s Training and Doctrine Command at Fort Monroe, Va.

&#8220;In the first two years of Iraq, convoys (under attack) just fired and kept rolling,&#8221; said Maj. Roger Gaines, the battalion&#8217;s operations officer said Thursday. &#8220;That gave bad guys the perception that Americans run away. Now, convoys will stop and engage the enemy.&#8221;

The change is part of Army Chief of Staff Gen. Peter Schoomaker&#8217;s underlying philosophy of a more rigorous response to attacks, Perritt said in a telephone interview Thursday.

The training is mandatory for all soldiers, regardless of their military occupational specialty.

Members of the 1st Armored Division&#8217;s 141st Signal Battalion tried out the new policy while practicing live-fire convoys this week at the Grafenw&#246;hr Training Area.

On Thursday, 35 soldiers from the battalion&#8217;s Company C convoyed across a range, responding to simulated roadside bomb and several small-arms attacks. Each time the convoy was attacked, soldiers leapt out of their Humvees and took cover before unleashing a hail of rifle and machine-gun fire on pop-up targets.

The change in tactics is necessary because insurgents are getting smarter, said Sgt. 1st Class Charles Ahlborn, 36, of San Diego.

&#8220;They know our reactions to certain things. Two years ago, they would never try and stop us,&#8221; he said. &#8220;But now IEDs (improvised explosive devices) are becoming more prevalent on the battlefield, and they are doing anything they can to try and stop the convoys.

&#8220;So what we are trying to do is plan for any type of contingency or scenario that insurgents might throw at us. The objective is not to chase them down. Just protect yourself and neutralize the threat that is immediate to your convoy.&#8221;

But times have changed, he said.

&#8220;The insurgents have learned that we blow on through. They know you are going to run past, so they will ambush [soldiers] down the road with a frontal ambush,&#8221; he added. &#8220;This training gets us ready for multiple attacks.&#8221;