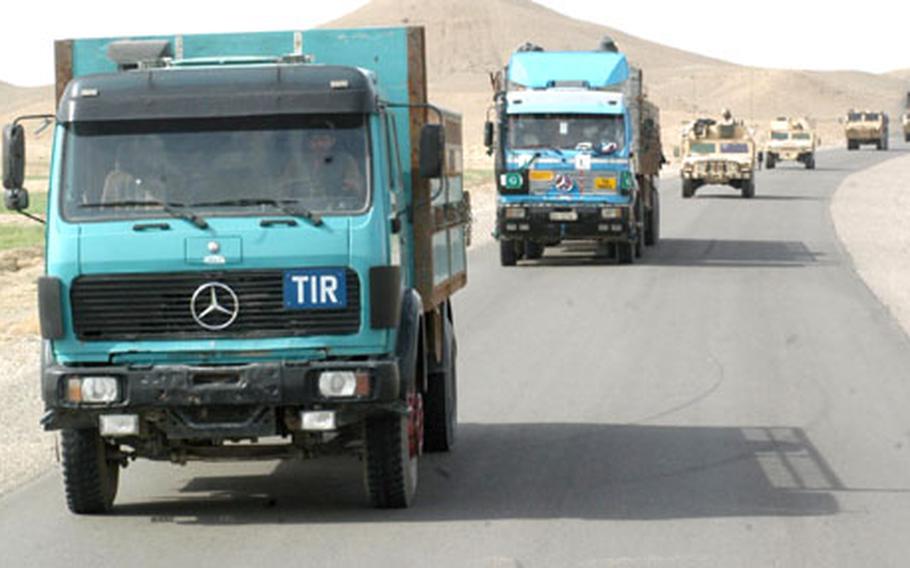 Part of a convoy makes its way from Kandahar Airfield to Qalat along one of the best roads in Afghanistan. (Kent Harris / S&S)

KANDAHAR PROVINCE, Afghanistan &#8212; The American military relies on helicopters and cargo planes to transport much of its cargo and personnel around Afghanistan.

That&#8217;s due partly to mountainous terrain and rudimentary roads that can make even a Humvee journey of less than 100 miles a daylong affair. That&#8217;s one of the major differences between Afghanistan and Iraq &#8212; where military convoys are commonplace.

But there are places in Afghanistan where convoys make sense. And one of those involves stretches of the country&#8217;s best road &#8212; the A4 highway &#8212; in Kandahar province.

&#8220;Our mission is to resupply personnel and cargo out to Qalat,&#8221; said 1st Lt. Tim Bragg, a platoon leader with the 173rd Support Battalion, before heading out on a convoy from Kandahar Airfield early Tuesday morning.

Most of the battalion has redeployed to Vicenza, Italy. But about a dozen soldiers were left behind to run convoys out to its sister unit in the 173rd Airborne Brigade &#8212; the 2nd Battalion, 503rd Infantry Regiment.

The route isn&#8217;t without its dangers. Roadside bombs, suicide bombers on vehicles and quick-hitting ambushes are the tactics of choice by those who attack Americans in the area. And, of course, there are regular Afghan citizens, who tend to play it a little loose when it comes to driving practices.

But Tuesday&#8217;s convoy was supposed to be its last and Bragg&#8217;s transportation platoon hasn&#8217;t suffered any casualties along the route.

Some members of the platoon served in the battalion&#8217;s predecessor, the 173rd Forward Support Company, in Iraq. And that company wasn&#8217;t as fortunate.

Sgt. Evelyn Ortiz, who mans a .50-caliber machine gun on a Humvee, was wounded when she and two others were thrown from their vehicle as a roadside bomb exploded. She received shrapnel in various parts of her body and about a dozen stitches were required to close a wound on her forehead. She also received a Purple Heart.

Ortiz said she&#8217;s alert on the two-hour trip that her platoon has made about twice a week.