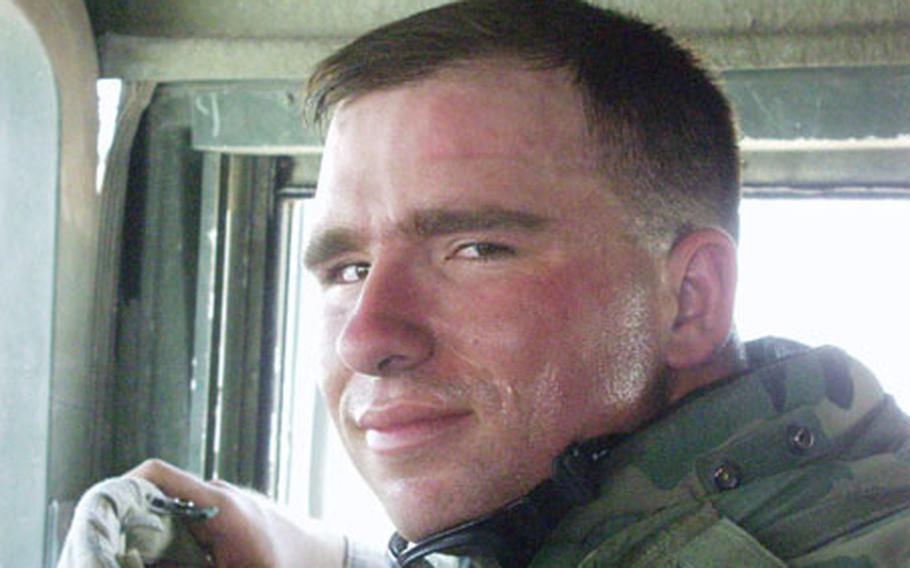 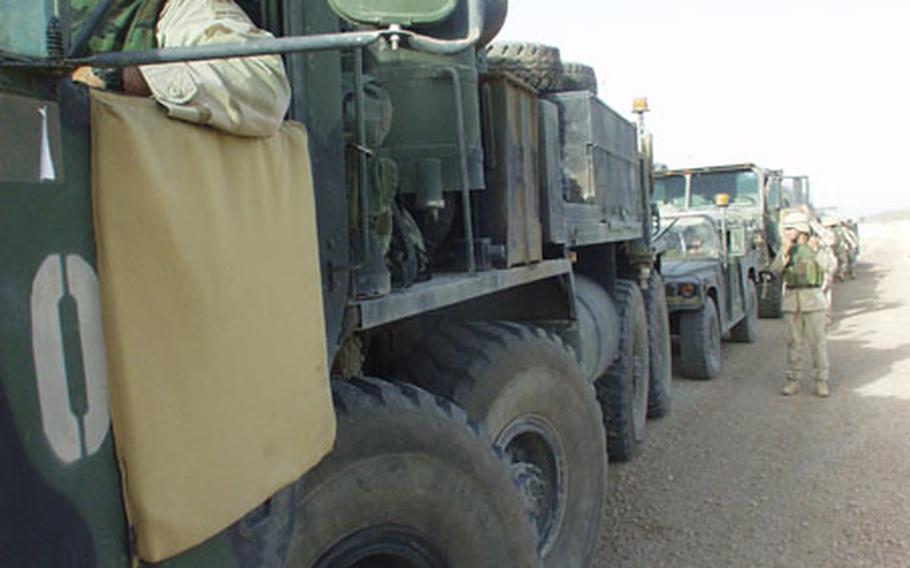 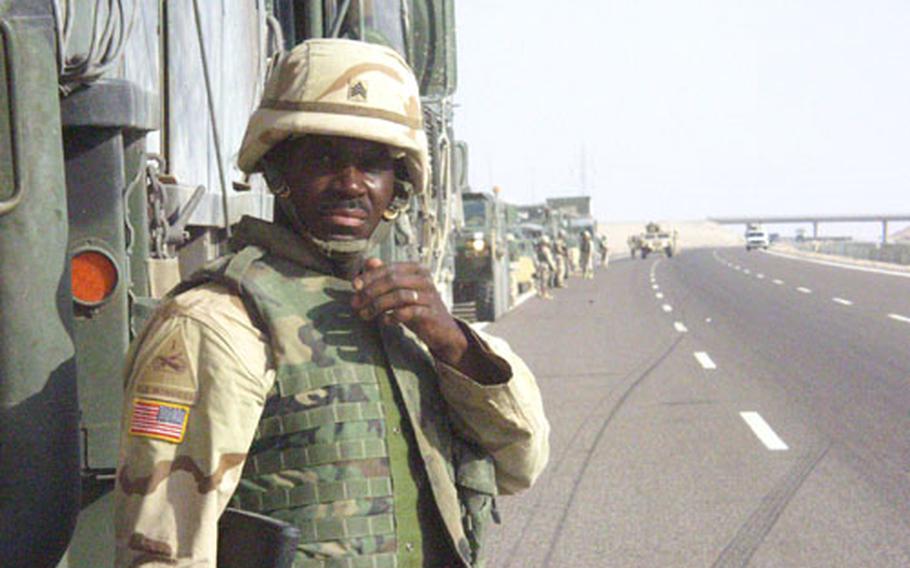 Sgt. Leroy Lewis of Columbus, Ga., and Headquarters Company, 1st Brigade, 1st Armored Division, pulls security Friday along a highway south of Baghdad during a convoy from Baghdad to Kuwait. The convoy stopped because the Humvee in the background broke down. After spending 14 months in Iraq, Lewis, who has a wife and three teen-aged children in Germany, said returning home "is like finally getting the the opportunity to do something you&#39;ve been longing for, like suddenly winning the lottery." (Charlie Coon / S&S) 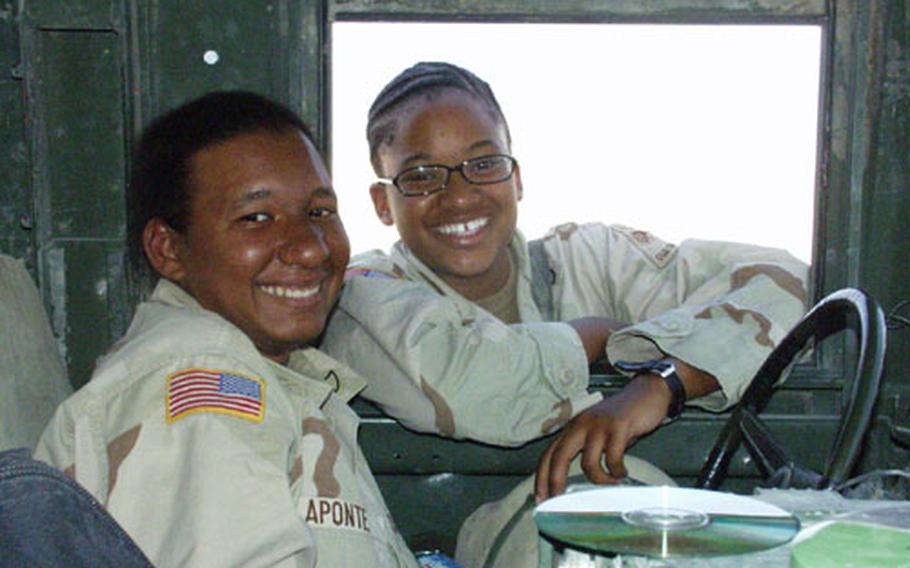 The soldiers gathered around Capt. Matt Scalia and stood in the darkness. Behind him, 35 vehicles were lined up and ready to go.

For a soldier, leaving Iraq after 15 months of dirt, heat and homesickness sounds easy. The 1st Armored Division is in the midst of returning to Germany, and dozens of convoys carrying its soldiers and equipment are currently proceeding from Baghdad south to Kuwait.

The vehicles and equipment are being cleaned, loaded onto boats and shipped back to Europe. Soldiers with visions of beer and barbecue are being loaded onto planes and flown back.

But leaving Iraq isn&#8217;t as easy as it sounds, as soldiers of the 1st Brigade&#8217;s Headquarters Company and 501st Forward Support Battalion recently found out.

On Friday two hours before the sun came up, they rolled out of Camp Victory North. The only thing between them and Germany, home of the 1st AD, were the dangers the trip presented.

The vehicles &#8212; Humvees, 5-ton trucks and other large, lumbering machines &#8212; proved hard to drive as the convoy tried to stay together over highways and rutted roads. Insurgents who wanted to kill Americans was another risk.

Camp Victory North is one of several sprawling bases around the miles-wide area known as Baghdad International Airport, known as BIAP. In a sign of things to come, as they tried to leave BIAP the soldiers were cut off by another convoy.

So they sat as though waiting at a railroad crossing. More than an hour after they&#8217;d begun their trip home, the soldiers were still at BIAP. It was two hours until sunrise and the weather forecast called for another hot day.

At 5 a.m., the convoy finally left the security of BIAP and started onto a highway outside Baghdad.

Sgt. La&#8217;Manza Davis of Phoenix rode shotgun and held an M-16 automatic rifle, its barrel hanging out the window. Davis&#8217; left index finger was near the trigger and his thumb was on the safety switch that controlled whether the rifle fired in single shots or three-shot bursts.

The road being used by the convoy had been patrolled and swept for improvised explosive devices but that did not sweep away the paranoia.

Just before dawn a half-dozen white Toyota pickups pull onto the highway from adjacent farm roads and spread out among the mile-long convoy, carrying something that looked like sandbags. In a few minutes they pulled off the highway and into other farms.

As it moved along, the convoy passed ripped-away tires, car parts, boxes and piles of dirt and rock strewn along the highway.

A series of vehicle breakdowns slowed progress. The convoy&#8217;s tow truck had a flat tire. But the convoy eventually reached the first checkpoint, a U.S. refueling station three hours south of Baghdad. The station was surrounded by a sea of military vehicles and 18-wheelers going this way or that.

Some vehicles needed oil, others minor repairs. The generator on one of the Humvees was kaput. Sgt. Brett Michael of Montoursville, Pa., a mechanic, popped the hood and diagnosed the problem: just a broken bolt.

&#8220;Our goal is to fix it on the spot or tow it to a safe, nonhazardous area,&#8221; Michael had said before the trip. The refueling area was a safe area, so he crawled under the Humvee and went to work.

Nearly three hours later the convoy fired back up. It eventually reached a stretch of road in southern Iraq the military calls the &#8220;unimproved highway.&#8221; It&#8217;s a highway, but without pavement.

The plan was for the convoy to have already traversed the unimproved highway before the peak heat of the afternoon. But because of delays, the vehicles began the nearly four-hour stretch of rocky road at 1 p.m., when the air temperature was about 110 degrees. And climbing.

For the next four hours, the sweaty soldiers sat crammed inside military vehicles, chugging water while passing children on the roadside begging for it. They passed miles of desert and the charred carcasses of 18-wheelers.

Several times the convoy pulled aside to allow a vehicle to be repaired, or to allow a slower portion of the convoy to catch up like a giant Slinky.

The convoy eventually reached Camp Cedar II, a base camp that was like a big truck stop of convoys and other military motorists heading in various directions.

Scalia, commander of the convoy and 1st Brigade&#8217;s Headquarters Company, again gathered his troops. He told them to grab whatever chow and rest they could and be ready to roll at 4 a.m.

It had taken 15 hours to cover the first leg of the trip, which was 210 miles, for an average speed of 14 mph. It had been a long, hot day. But thanks to mechanics and tow-bars, all the soldiers and vehicles had made it this far. They were all ready for a break.

Scalia, son of U.S. Supreme Court Justice Antonin Scalia, acknowledged that it had been &#8220;painful.&#8221;

The road was smooth from Camp Cedar to the Kuwait border and farther south to Camp Arifjan. There were no major breakdowns or delays, except for a stop at the border and another at a U.S. camp in Kuwait, where the soldiers dumped unused ammunition and removed protective steel from their vehicles. Then it was on to the final destination.

The trip overall covered nearly 500 miles and took 42 hours. And even though the second day was much easier than the first, it was still hard work.