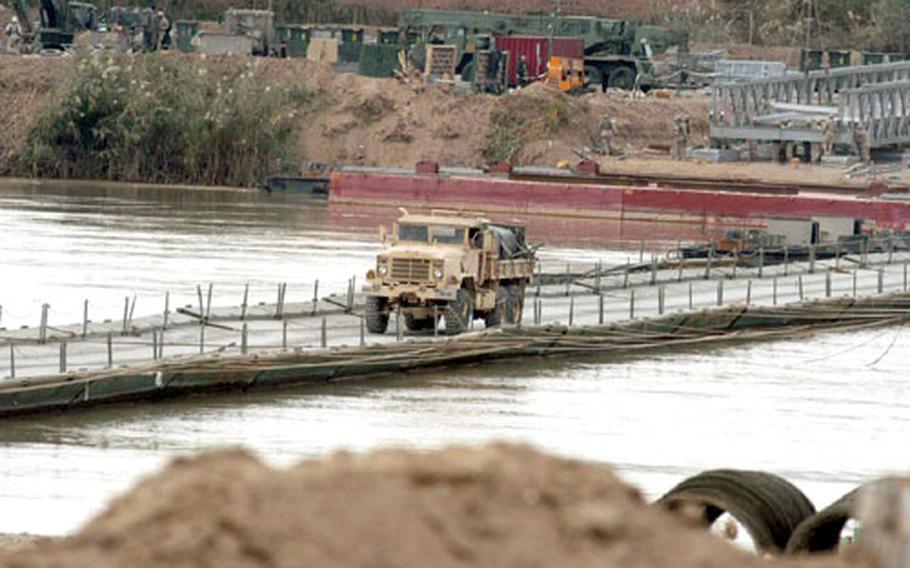 At a bridge floating on the Tigris River in Iraq, convoys often face long waits because only one truck can cross at a time. During one recent mission, members of the 369th Transportation Company had to wait nervously for four hours as other convoys made their way across the bridge. A new bridge is being built by Marines that will be able to handle more traffic. (Ron Jensen / S&S)

At a bridge floating on the Tigris River in Iraq, convoys often face long waits because only one truck can cross at a time. During one recent mission, members of the 369th Transportation Company had to wait nervously for four hours as other convoys made their way across the bridge. A new bridge is being built by Marines that will be able to handle more traffic. (Ron Jensen / S&S) The lead gun truck in a convoy in Iraq encounters traffic in the town of Al Khalis. Convoys hate traffic as it poses additional dangers, say drivers with the 369th Transportation Company. (Ron Jensen / S&S) Sgt. 1st Class Ricky Hill of the 369th Transportation Company, an Army Reserve unit from Wichita, Kan., keeps an eye on his lead gun truck while commanding a convoy recently between two bases in Iraq. Two of Hill’s sons are also serving in Iraq, and a third is on the way. (Ron Jensen / S&S) 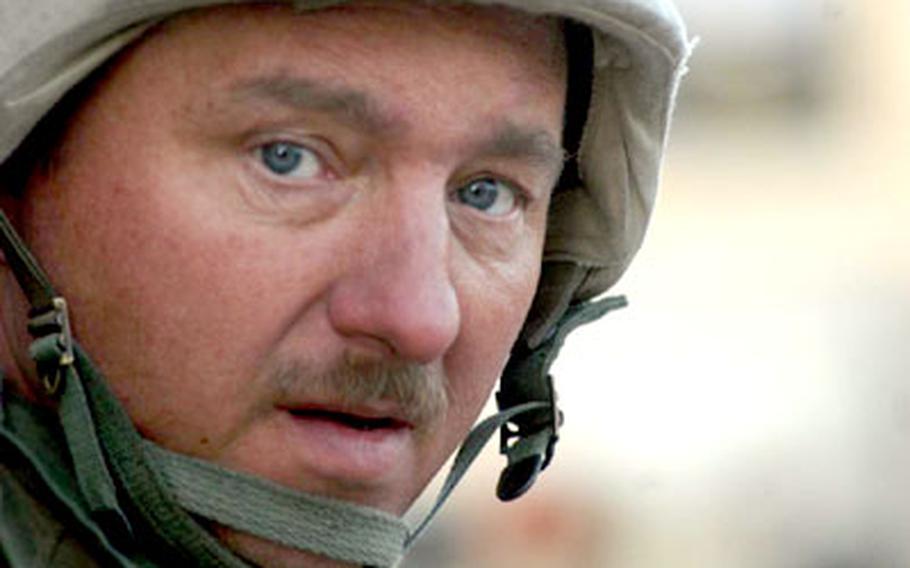 Sgt. 1st Class Ricky Hill of the 369th Transportation Company shows the concern of a convoy commander as he watches his 21-vehicle convoy cross the Tigris River recently in Iraq. The company is on the road daily in Iraq, and the commander&#39;s job is to get the load and the people to the destination safely. (Ron Jensen / S&S) 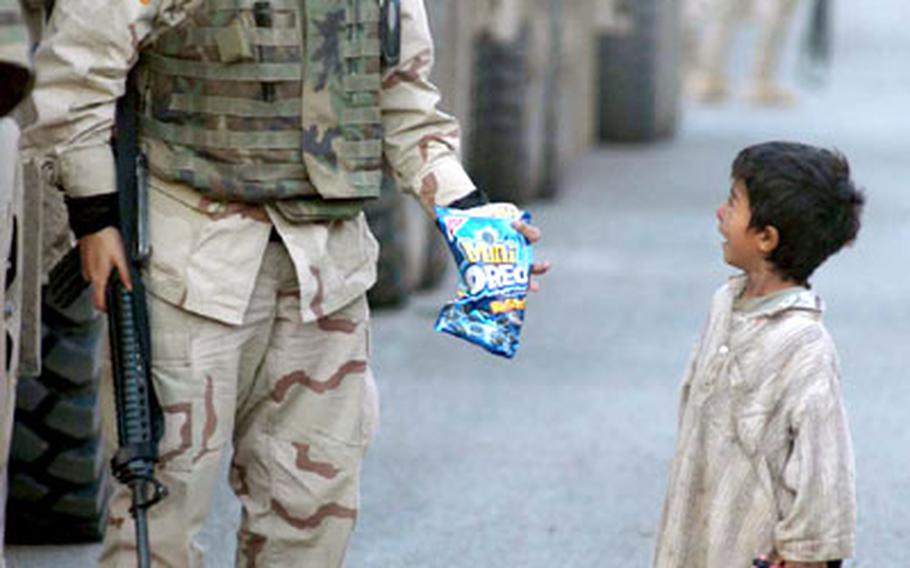 Sgt. Marina Kulesz offers a bag of cookies to a young Iraqi boy while the convoy is stopped. (Ron Jensen / S&S)

It was not yet dawn and Hill, 47, who has two sons serving in Iraq and another on the way this month, was the convoy&#8217;s commander.

&#8220;If you take small arms fire, turn on your turn signal on the side it&#8217;s coming from,&#8221; he told the drivers, using a flashlight to read his notes. If someone is wounded, turn on the emergency lights. If a vehicle has a mechanical problem, flash the headlights.

With a final note about insurgents &#8220;causing havoc&#8221; along the road, the convoy left with a gun truck in the lead and Hill following in an armored Humvee. The remaining 19 vehicles stretched for a good part of a mile.

The road from LSA Anaconda to FOB Warhorse is as familiar to the soldiers of the 369th Transportation Company as their own back yards.

They know every twist and turn, every bump, every village and every palm grove that creeps close to the road, providing possible cover for an insurgent.

They&#8217;ve driven the 25-mile route nearly every day since arriving in March and can point out the scarred holes along the pavement where roadside bombs, known as improvised explosive devices by troops, have detonated.

The Reserve unit from Wichita, Kan., has about 150 soldiers. It has collected numerous Purple Hearts. Two soldiers were wounded so seriously they were sent home. But insurgents have not taken the life of any member in the 369th.

A few days earlier, the company was delayed for several hours by eight roadside bombs on the way to Warhorse, all of them spotted before they could do any damage.

Yet they drive. Most have completed more than 100 missions, many close to 200.

The people of the 369th come from more than 20 states, although most are from Kansas. They are students, mechanics and truck drivers in civilian life.

But in Iraq, they are soldiers who move supplies to other soldiers. &#8220;Strap tight, fit to fight,&#8221; is the company motto, succinctly summing up the two jobs.

They have driven other routes &#8212; as far north as Mosul and as far south as Kuwait. But every day, the company sends a convoy from Anaconda to Warhorse.

The familiarity has given them an advantage. They know what&#8217;s there, and they know what shouldn&#8217;t be there.

Was that abandoned car there yesterday? Are the children, ubiquitous for much of the route, absent from the spot where they normally stand to wave and ask for handouts?

Sgt. Christopher Collins, a college student from Kansas City, Mo., remembered riding in a gun truck when someone opened up on the convoy.

It was instinct, he said, a case of training kicking in and reacting with the .50-caliber machine gun he manned that day.

Along the way, there are a couple of worrisome spots.

At a floating bridge across the Tigris, only one truck can cross at a time.

This takes more than 30 minutes, as vehicles must wait on the far side. Hill spends that time nervously watching and tracking each vehicle crossing with his radio.

Another unsettling spot is the town of Al Khalis, which bristles with traffic. Convoys hate traffic. Other vehicles can slow a convoy almost to a halt, making it vulnerable, or they can slip between two convoy vehicles.

In recent months, U.S. convoys around Iraq have come across a new insurgent attack method: the VBIED, which stands for vehicle-borne improvised explosive device. Someone drives up to a convoy, opens the door or window and tosses a bomb at a truck.

&#8220;You have to be aggressive here,&#8221; Boudreau said as the convoy reached Al Khalis, and cars, trucks and donkey carts entered the road from both sides.

The convoy arrived at FOB Warhorse without incident. Some ate breakfast while others unloaded the trucks.

A few vehicles get added to the convoy returning to LSA Anaconda. Hill gave pretty much the same cautionary spiel as he had that morning.

The traffic in Al Khalis was still a bother, but the convoy made it through. The river crossing, however, was a farce.

Several convoys had converged on the tender float bridge at the same time from both sides. It would be a four-hour wait for Hill&#8217;s convoy to cross.

During the wait, he maintained his ever-present nervous look. Some of his soldiers pulled security while others played with the children that inevitably approached U.S. soldiers.

By the time the convoy returned through the north gate of Anaconda, all that remained of daylight was a fading streak of orange along the western horizon. The soldiers still had to unload the trucks and refuel them for the next day&#8217;s mission.

Holub was asked how the soldiers are able to stand the pace for 12 months.