Convoy is bearer of good news 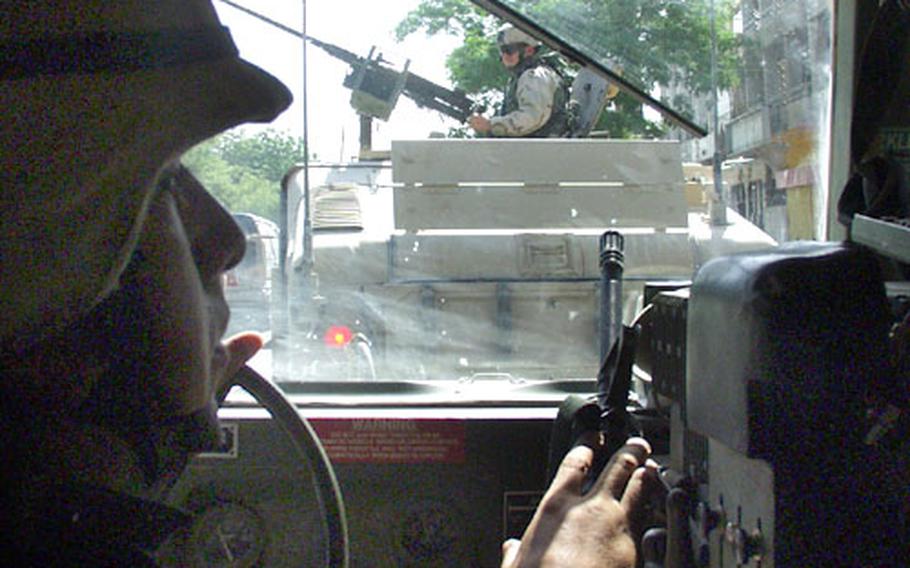 The mission was to deliver Maj. Andreas de Kunffy to the offices of five small newspapers in Baghdad so he could speak with the editors, then deliver him safely back to Camp Cooke.

At 10 a.m., the convoy wedged its way through a crowded side street and parked in front of a three-story building. Soldiers dismounted from the Humvees; some stood guard on the street corners with their M-16s, while others took pictures and played with the children who often come out of nowhere whenever a convoy stops in a populated area.

Spc. Nathan Puckett of Paris, Ark., and the 1st Battalion, 206th Field Artillery Regiment, scans the rooftops with an M-16 tucked into his armpit and pointing down. He&#8217;s been in Iraq for 2&#189; months.

Twenty minutes later, de Kunffy emerged with his interpreter and a soldier-bodyguard and the team loaded back into the Humvees and took off.

They stopped again at an office along a teeming inner-city boulevard. The visitors were expected, sort of. The times, dates and order of the press visits are changed sometimes to keep potential assailants off their guard.

It&#8217;s not like doing a press tour in the States, where some babbling disc jockey and marketing happy-face might be waiting at a radio station with an extra headset and plate of cookies.

De Kunffy and his two-man entourage walked inside. Outside, atop one of the Humvees, Staff Sgt. Chris Pack of Orlando, Miss., and the 1-206th pivoted in his turret behind sunglasses and an M2 .50-caliber machine gun.

Staff Sgt. Randall Alford tensed up as a dirty horse carrying an old man and pulling a wagon slowly clip-clopped by.

Alford, a battalion chief for the Russellville (Ark.) Fire Department and medic for the 1-206th, said he is hopeful for the Iraqis&#8217; future.

The destruction caused by American forces early on in the war, followed by the troops&#8217; prolonged stay, has made skeptics out of some Iraqis who used to be unquestioning allies.

&#8220;We have a different opinion of the American soldier before [the initial invasion last spring]; now we&#8217;ve changed our opinion,&#8221; said Tahaa Araf, editor in chief of Al Manar Today, a small Baghdad daily.

&#8220;Unfortunately, it has changed from them being liberating forces to them being invasion forces.&#8221;

The media tour can be a tough sell for de Kunffy and others in the U.S. military who have similar jobs. As they conspicuously rumble down the sun-baked streets of Baghdad, soldiers wave from inside the Humvees to people on the sidewalks and say to them, &#8220;Salam haleikum,&#8221; or &#8220;Hello, God be with you.&#8221;

Many residents smile and wave back. Others, particularly men sitting on rickety chairs in front of storefronts, only glare back.

Araf said he wished the story of Baghdad would have a happy ending. Those stories have yet to be written.