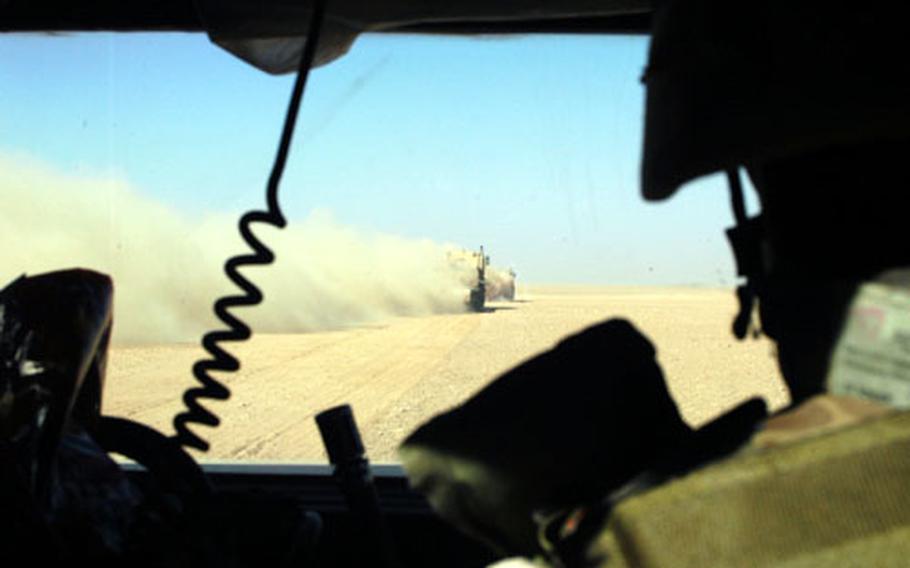 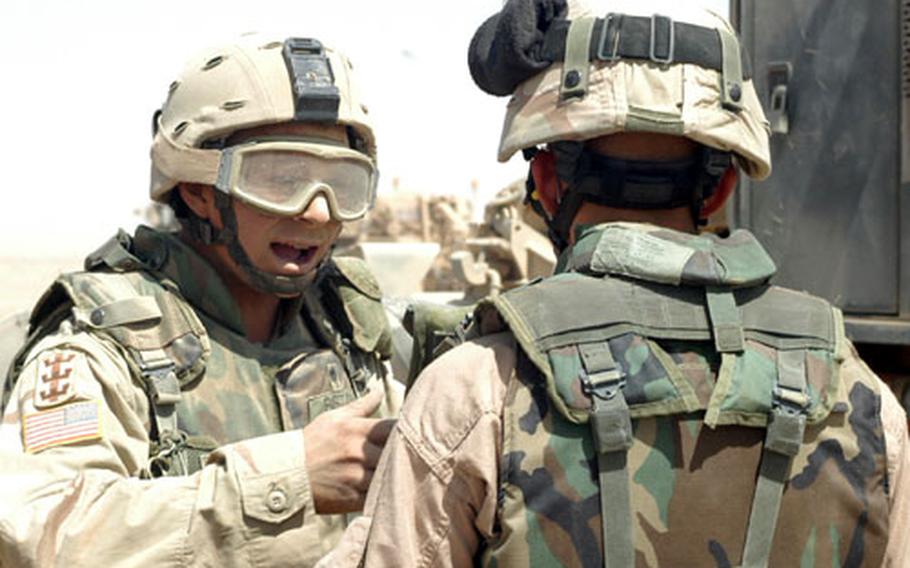 Spc. Ryan Ristow, left, explains to Spc. Brandon Brooks how sand came into the Humvee he was driving and covered his face, hands and goggles with white dust during a convoy to Command Outpost Rawah, Iraq, last week. (Rick Emert / S&S) 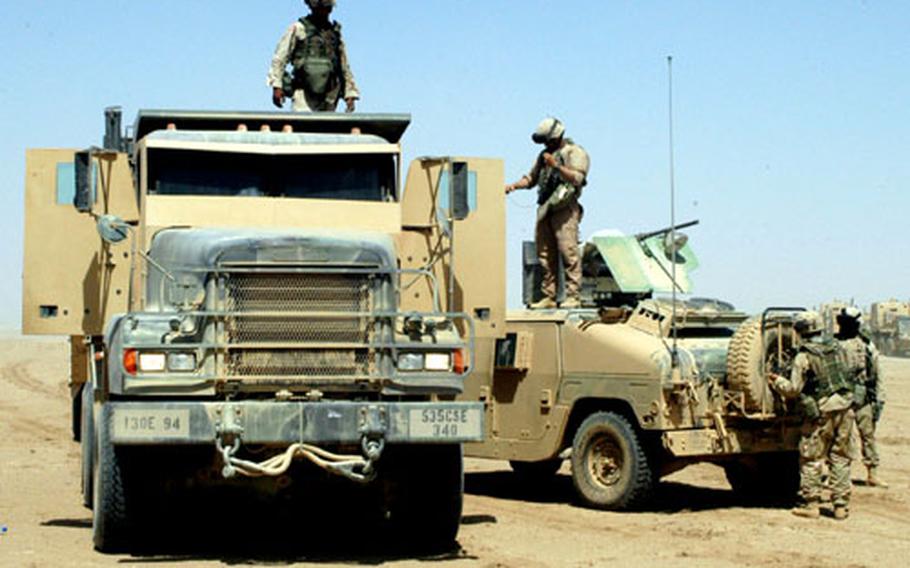 Soldiers from the 535th Engineer Company (Combat Support Equipment) and Company A, 94th Engineer Combat Battalion (Heavy) check their vehicles and stretch their legs Friday during a scheduled rest stop about two-thirds of the way to Command Outpost Rawah. (Rick Emert / S&S) 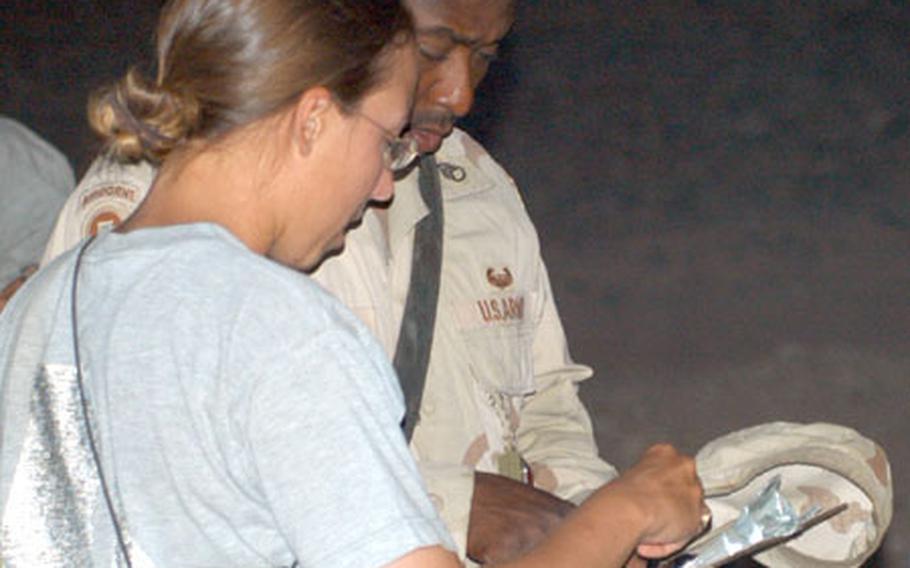 But the company&#8217;s 3rd Platoon &#8220;High Rollers,&#8221; along with soldiers from Company A, 94th Engineer Combat Battalion (Heavy), have come to see Marez as an oasis after driving four tactical convoys through a desert where the dust surely must be on steroids.

The convoys carried building and personal supplies to soldiers from the 94th Engineers at Command Outpost Rawah near the Syrian border. The engineers have been building the outpost since mid-July and work should be complete Sept. 1.

Without the soldiers who made these desert voyages, the construction at the outpost would have come to a halt long ago.

Driving up to 25 hours through the desert posed a challenge for the soldiers, but there also was a threat of makeshift bombs and anti-tank mines. The soldiers anticipated that, though.

&#8220;We did a lot of movement training before we deployed, and we had to drive up from Kuwait to Mosul,&#8221; said 1st Lt. Heather Sprowls, 3rd Platoon leader and commander of the tactical convoy.

She told soldiers in a security briefing before the final convoy began on Aug. 17 that a previous convoy had been hit by a roadside bomb. And on another convoy, a dump truck had driven over an anti-tank mine. No soldiers were injured in the incidents, because all of the vehicles in the convoy were armored.

Before the convoy began, soldiers lined up to have their gear checked.

&#8220;I need to ensure they have everything they need &#8212; heat-resistant gloves, eye protection, hearing protection and things like that,&#8221; said Staff Sgt. Jeffery Collins, noncommissioned officer of the tactical convoy.

Drivers inspected their vehicles and everyone made sure they had the proper gear for the trek. There were items not on any official checklist, but just as vital to the trip: Red Bull, Starbucks&#8217; chilled Double Shot espresso, Mountain Dew and munchies.

The convoy would stop for a day at Q West, a forward operating base where the 94th Engineers had set up a logistical staging point.

At dawn Aug. 20 at Q West, Sgt. Catharine Audette, maintenance shop foreman, mechanic and combat lifesaver from the 535th, did a final check of the 22 vehicles in the convoy as she downed a Red Bull with a Double Shot chaser. As a mechanic and one of the combat medics on the trip, there was no room for drowsiness.

Depending on how the convoys go, the mechanics could be very busy, but they don&#8217;t seem to mind.

During the first two hours, the convoy rolled along on paved roads.

At one point, Collins, in the rear vehicle, radioed to the lead vehicle that his gun truck, a Humvee with a .50-caliber gun on top, had to fire at a pickup truck that disobeyed warnings to stay away from the convoy. The round went through the pickup&#8217;s engine block, stopping the vehicle cold. The driver was not hurt.

As the convoy turned off the paved road and moved onto the sand, giant clouds of dust billowed across the desert, kicked up by the tires of dump trucks and tractor-trailers. At first, the wind carried the dust away from the convoy, so visibility for the drivers was good. But, as the route shifted directions, the dust engulfed the convoy. Visibility dropped to nothing, and drivers slowed down to avoid rear-ending each other.

The flourlike sand found its way into vehicles through the slightest of openings. The air inside was thick with it.

At a scheduled rest point, about three-fourths of the way through the desert, Spc. Ryan Ristow &#8212; his face and goggles covered with dust &#8212; jokingly offered to switch vehicles with any of the other Humvee drivers. He said sand had been flowing in from underneath the dashboard, targeting him specifically.

Despite the terrible driving conditions and lack of air conditioning in most of the vehicles on that sweltering summer day, the soldiers joked around on the rest stop as if they were just stepping out of the office to have a smoke.

About an hour later, the convoy pulled into Rawah, having made the trip through the desert in about six hours.

The soldiers unloaded the supplies and found out where they would bed down for the night.

Early the next morning, they would start the trip all over again as they headed back home to Marez.