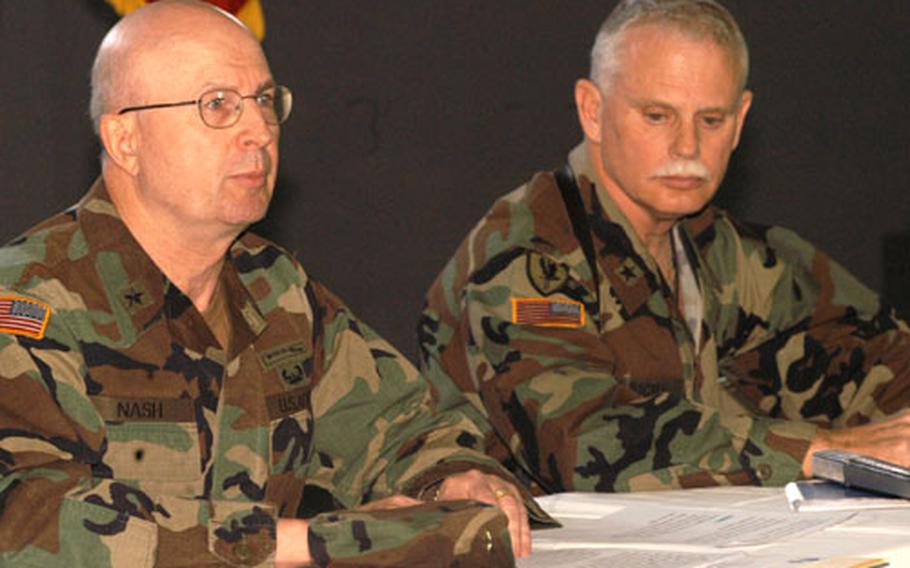 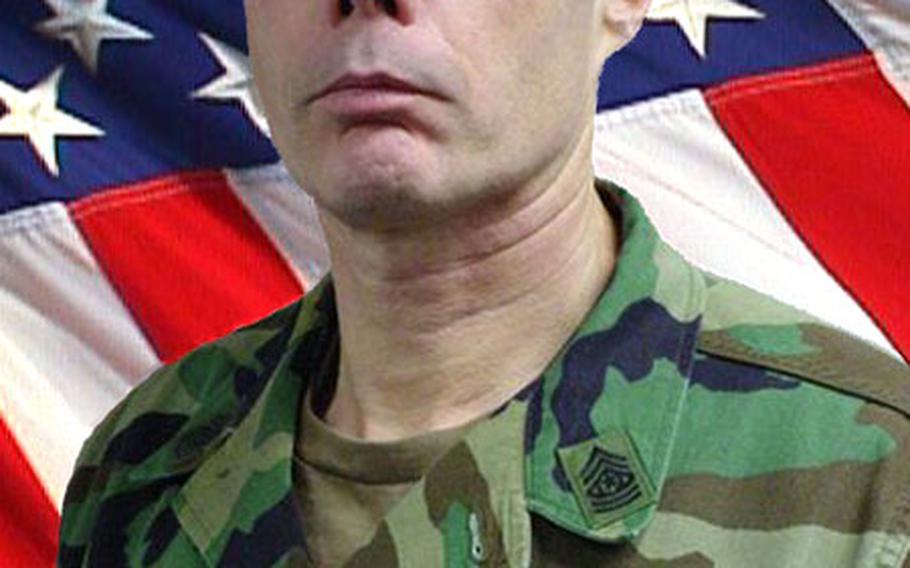 HEIDELBERG, Germany &#8212; The Army convicted Command Sgt. Maj. Stephen D. Rannenberg in January to charges of sexual misconduct while serving as the top enlisted soldier for the U.S. peacekeeping contingent in Bosnia and Herzegovina.

Rannenberg, 51, was charged with multiple counts of sexual harassment and indecent assault against eight female soldiers ranging in rank from junior enlisted troops to a field-grade officer, according to court documents obtained by Stars and Stripes.

Rannenberg was the command sergeant major of the Minnesota National Guard&#8217;s 34th Infantry Division, known as the Red Bulls, and was selected for the top enlisted post of Task Force Eagle when the Guard unit was sent to Bosnia last year.

At the top of Rannenberg&#8217;s list of responsibilities as the Task Force command sergeant major, according to his official biography at the time, was to take care of his troops: &#8220;He maintains standards and promotes professional appearance, physical condition, military courtesy, discipline, training and soldier performance.&#8221;

The case against Rannenberg, a 29-year veteran of the Guard, comes to light as authorities revealed allegations of sexual impropriety against the former top commander of the Minnesota National Guard &#8212; Air Force Maj. Gen. Eugene R. Andreotti &#8212; who retired in August after an investigation was launched into his conduct.

The charges against Rannenberg stemmed from complaints that went as far back as June, when the division headquarters was mobilizing at Fort Chafee, Ark., in preparation to take over the peacekeeping mission in Bosnia, according to the charge sheet signed by Capt. Jason M. Good, commander of the division&#8217;s headquarters company, and the Army&#8217;s &#8220;Report of Result of Trial&#8221; on Rannenberg&#8217;s case.

The harassment continued, according to the documents, through the division&#8217;s assumption of the mission in September and well into autumn.

Rannenberg was formally charged on Dec. 8.

&#8226; Disrespect of senior commissioned officers &#8212; A 1st lieutenant, two captains and one major said Rannenberg had approached them on multiple occasions with lewd comments, including, &#8220;I really like your lipstick and fantasize about tasting your lipstick,&#8221; and &#8220;I had a dream about us taking a bath together.&#8221; The comments, they said, were often accompanied by Rannenberg fondling their hands, stroking their arms or sniffing their necks.

&#8226; Unlawful touching &#8212; One of the women said Rannenberg grabbed her hand and shoved it inside his combat fatigues, &#8220;refusing to allow her to withdraw her hand from that position,&#8221; according to the documents.

&#8226; Indecent assault &#8212; In the most serious charges, three of the enlisted soldiers said Rannenberg tried to force himself on them, two of them on the same night on Halloween. In one of the instances, he was charged with following the soldier to her office, closing the door, turning off the lights and embracing her against her will.

Rannenberg faced a court-martial on Jan. 8 in Heidelberg.

Under a pretrial deal, Rannenberg pleaded guilty to all but one of the lesser charges. In return, the more serious indecent-assault charges were dropped.

Rannenberg, however, never served a day in jail. Instead, as part of his pretrial deal, he was allowed to retire with full benefits as an E-7, a reduction in rank by two grades.

The man who approved that plea bargain was Brig. Gen. Richard C. Nash. As the commander of Task Force Eagle, Nash was what is known in military justice as the convening authority, roughly equivalent to an attorney general in civilian courts, with ultimate authority on what cases get prosecuted and final approval on plea bargain deals.

Under the system, Army judges hand down their own sentences without knowing the details of any pretrial agreements, and the accused gets the benefit of whichever sentence is less.

When the 34th ID received its orders for Bosnia, Rannenberg was hand-picked by Nash to serve as his command sergeant major. According to officials familiar with the case, Nash and Rannenberg had served together repeatedly throughout their careers in the Minnesota Guard.

&#8220;This sounds like a sweetheart deal,&#8221; said Victor Kelley, a retired military judge and president of the Birmingham, Ala.-based National Military Justice Group, a legal firm specializing in military cases.

&#8220;Folks in the military give an awful lot of lip service to senior leaders being held to a higher standard, but when the rubber meets the road, that very often doesn&#8217;t happen,&#8221; added Kelley, who retired in 1989 as a military judge and has 25 years of experience in military justice.

Nash, who has since been nominated to pin on his second star, did not return repeated phone calls.

Col. Denny Shields, a spokesman for Nash and the Minnesota National Guard, said it would be inappropriate for him to comment on the propriety of Nash&#8217;s pretrial deal with Rannenberg.

&#8220;I can&#8217;t comment on an action that took place in the active Army world,&#8221; said Shields, referring all questions to the headquarters of U.S. Army Europe in Heidelberg.

Lt. Col. Jane Crichton, USAREUR spokeswoman, said it was inappropriate for USAREUR officials to comment on Nash&#8217;s reasoning behind the deal.

Reached by phone at his home in Superior, Wis., where he works as a county zoning administrator, Rannenberg also declined to comment, saying only, &#8220;I&#8217;m just trying to put all that behind me.&#8221;

Steve Koszarek, Rannenberg&#8217;s boss, said he had not been told about the court-martial.

&#8220;All we knew was that he retired after coming back from Bosnia,&#8221; said Koszarek. Koszarek said he was unaware of any similar behavior by Rannenberg in his civilian job, where he&#8217;s worked for more than three years.