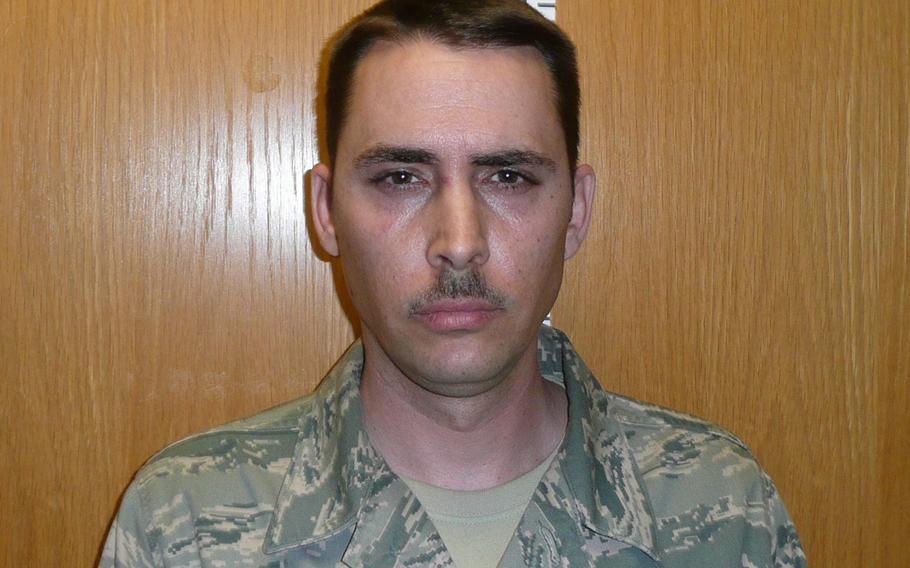 Convicted child molester Michael L. Merritt has been sentenced to an additional nine years in prison after pleading guilty to additional charges earlier this month in Wyoming. Merritt, who was stationed at Ramstein Air Base, Germany, was given a 25-year sentence following his conviction at trial last year. (U.S. Air Force)

KAISERSLAUTERN, Germany — A former Ramstein-based airman, already serving a 25-year sentence for child molestation convictions, was given an additional nine years behind bars after two more children came forward to report they had been molested.

During a bench trial held this month at F.E. Warren Air Force Base, Wyo., Michael L. Merritt pleaded guilty to two counts of aggravated sexual contact of a child younger than 12 years old, according to Air Force officials.

Eluding detection for months while stationed at Ramstein Air Base, Merritt instilled fear in parents in the Kaiserslautern Military Community.

According to information from military officials, provided during the course of the investigation, , Merritt molested some of his victims in public places inside the gated military communities, luring them in broad daylight on Ramstein and Vogelweh housing areas. The first report of his crimes was made in January 2012, when a child came forward to say a man wearing clothing that resembled a military uniform pulled her into his car and molested her in the Ramstein housing area. Several more children came forward that same year to report kidnapping attempts and molestations, Air Force officials have said.

Merritt wasn’t arrested until October 2013, about two months after he made a permanent-change-of-station move to F.E. Warren.

Over the course of the investigation, it was discovered that Merritt had been molesting children for years. His victims were all female children ranging in ages from 5 to 14 at the time of the charged offenses, Air Force officials said last year.

At his first trial, held last year in Wyoming, Merritt pleaded guilty to various sexual and abduction charges involving four children over a period of 10 years. The crimes occurred on bases in Germany and the U.S.

The new charges against Merritt stemmed from two victims who came forward after Merritt’s first trial, Ornella said in an email to Stars and Stripes. The crimes “were discovered after the victims read an article covering the first trial,” she said.

Both victims were under the age of 12.

Charging documents state that on or between Aug. 1, 2009, and July 31, 2010, Merritt touched with his hand the genitals of one of his victims through the victim’s clothing. In the other incident, which occurred on or between Jan. 1, 2011 and Jan. 23, 2012, Merritt intentionally used his hand to touch the inner thigh of his victim.

The charging documents don’t specify where in Germany the crimes took place.

In addition to the 25-year sentence, Merritt was also reduced in rank from technical sergeant to airman basic, made to forfeit all pay and allowances and given a dishonorable discharge.

Merritt will serve his sentences consecutively, meaning the additional nine years of jail time must be served after he completes his first sentence, Ornella said.

He is jailed at Fort Leavenworth, Kansas.