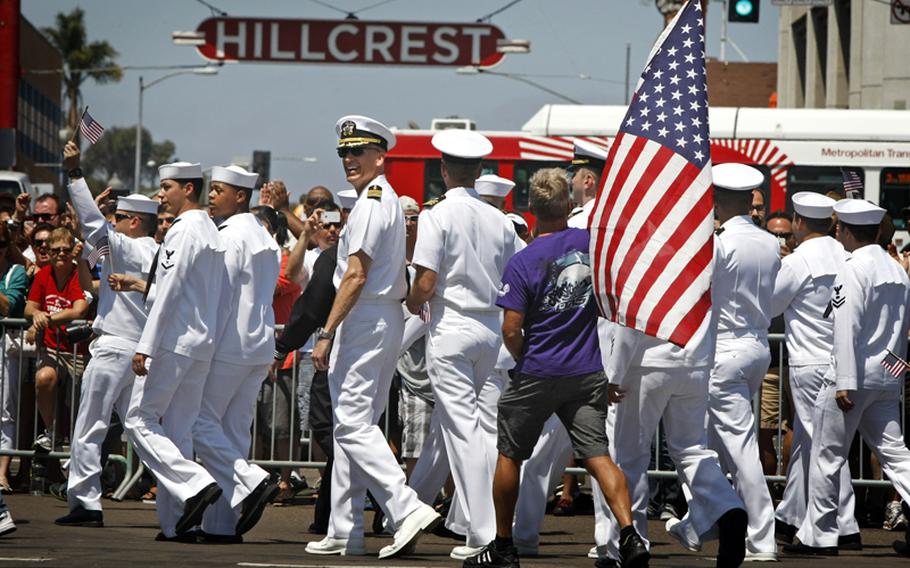 WASHINGTON &mdash; A top congressional Republican wants to know why the Defense Department allowed servicemembers to wear uniforms while marching last week in a San Diego gay, lesbian, bisexual and transgender pride parade, an action he says bypassed the department&rsquo;s policies against political activity by servicemembers.

In a letter this week to Defense Secretary Leon Panetta, Oklahoma Sen. James Inhofe wrote that the Pentagon had created a &ldquo;one time waiver&rdquo; to allow uniform wear in the parade on July 21, quoting DOD policy that servicemembers &ldquo;shall not march or ride in a partisan political parade.&rdquo;

So how did the Pentagon make its decision, and is Inhofe right when he says the Pentagon, under pressure from the Obama administration to advance its social agenda, made a special exception for the LGBT cause?

Some of the questions surrounding the DOD&rsquo;s decision:

Was there a waiver?

No. DOD&rsquo;s decision to approve uniform wear in the parade wasn&rsquo;t based on an exception to policy and it didn&rsquo;t use the term &ldquo;waiver.&rdquo;

In a July 19 policy memo explaining the DOD&rsquo;s decision, Rene Bardorf, deputy assistant secretary of defense for community and public outreach, summarized policies that prohibit wearing the uniform while participating in political or commercial activities, or activities that discredit the military.

Essentially, the Pentagon decided the San Diego parade fell under none of those categories &mdash; a conclusion hotly disputed by Inhofe &mdash; and declared that existing policy allowed servicemembers to march in uniform.

Was the parade a partisan political activity?

Depends on how you look at it.

The parade had no political affiliation, organizers say, and politicians of various stripes participated, including Republicans, Democrats and Green Party members. Additionally, military members stayed in a parade section where no signs or displays that could be interpreted as political were carried, just American flags.

&ldquo;This is about supporting a community, not supporting one party or another,&rdquo; said Fernando Lopez, public relations director for the San Diego parade.

But a parade focused on military service by homosexuals &mdash; an intensively divisive topic for decades &mdash; is inherently political and partisan, said Inhofe, who has made opposition to expanded rights for gays, particularly in the context of military service, a cornerstone of his service in the Senate.

&ldquo;The term political doesn&rsquo;t necessarily have to be about Democrat or Republican,&rdquo; Inhofe told Stars and Stripes. &ldquo;It can be about a philosophy or a social agenda.&rdquo;

Inhofe said he doubted the Pentagon, under pressure from the Obama administration, would allow servicemembers to march in support of nonpartisan causes dear to conservatives, such as ending abortion.

What was the basis of the DOD decision?

The Pentagon took the organizers at their word that the theme of the parade was simply a celebration of patriotism and local community &mdash; gay, lesbian, bisexual and trangendered though it may be &mdash; concluding it was not about partisan political activity.

&ldquo;It&rsquo;s a celebration and a patriotic one in the San Diego community,&rdquo; said Col. David Lapan, spokesman for the Chairman of the Joint Chiefs.

Sort of. Though not a parade, high-ranking DOD officials and uniformed servicemembers last month hosted a gay, lesbian, bisexual and transgender Pride Month event that drew hundreds of attendees to an auditorium at the Pentagon.

&ldquo;As recently as three years ago, it would have been hard for many of us, including me, to believe that in the year 2012 a gay man or woman in the Armed Forces could be honest about their sexual orientation,&rdquo; he said.

Is any gay pride parade open to uniform wear now?

Not necessarily. As laid out in Bardorf&rsquo;s July 19, policy memo, local commanders have to make the call whether an event &mdash; gay pride parade or otherwise &mdash; meets policy standards for uniform wear. And the Pentagon will still make the call in high-profile cases.

&ldquo;As for future events of this kind, or other kinds of parades that take place around the country, I&rsquo;m not going to speculate, because this was ... a one-time decision,&rdquo; Pentagon press secretary George Little said Thursday.

DOD is continuing to refine its policies that govern servicemember participation in parades, and the San Diego decision doesn&rsquo;t set a sweeping precedent, Little said.

In all likelihood, however, the Pentagon&rsquo;s announcement will make it easier to win approval in the future for troops to march in uniform in patriotic-themed LGBT parades.