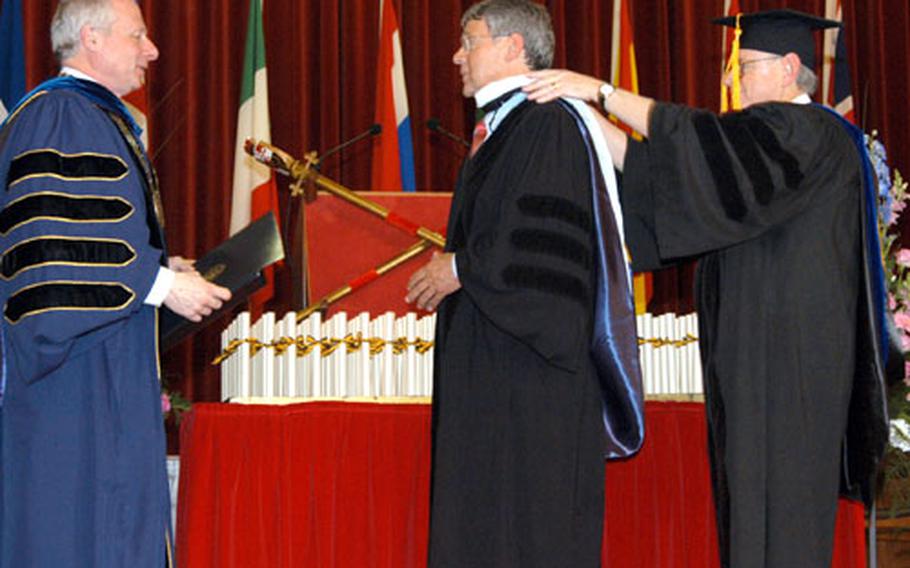 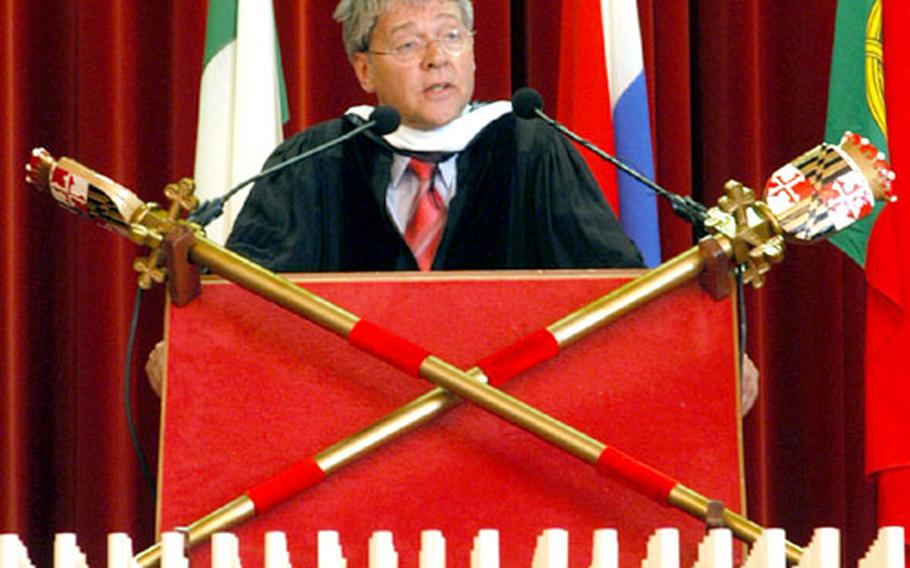 Professor Detlef Junker gives the keynote address at the University of Maryland University College&#39;s commencment ceremony in May. (Regis Bossu / Special to S&S)

A local expert on German-American relations recently gave new University of Maryland graduates something to talk about &#8212; and, in some cases, chant about &#8212; with a commencement address some thought bashed America.

Professor Detlef Junker, founder and director of the Heidelberg Center for American Studies, a self-professed great admirer of the United States &#8212; and the man who gave the address positing German-American relations were at their lowest ebb since World War II because of Bush administration policies &#8212; said he&#8217;s just the messenger.

&#8220;I still think it&#8217;s a balanced and fair statement and it is a correct European perspective,&#8221; Junker said Monday. &#8220;I thought on that day of history I should not only give some general niceties but say something substantial. After all, this is Jefferson&#8217;s first principle: Americans cannot be both ignorant and free.&#8221;

Junker has subsequently received several e-mails and letters, some, especially from faculty, supporting him. One letter writer, though, called him a Nazi.

John Golembe, director of the University of Maryland University College Europe, also dealt with a number of unhappy graduates and attendees who called or e-mailed him to complain.

But Golembe, who&#8217;s been with the University of Maryland Heidelberg program for the past 26 years, said Junker&#8217;s speech fell squarely within the tradition of college commencement speeches. There are basically two types, he said. One type is full of praise for graduates&#8217; accomplishments.

The second sort of commencement address deals with issues.

Junker said that, as a scholar, he could be expected only to talk about issues.

Afterward he knew. It wasn&#8217;t just the booing. One graduate came on stage, stopped and saluted the flag and then looked directly at Junker. &#8220;He gave me a very nasty look,&#8221; Junker said.