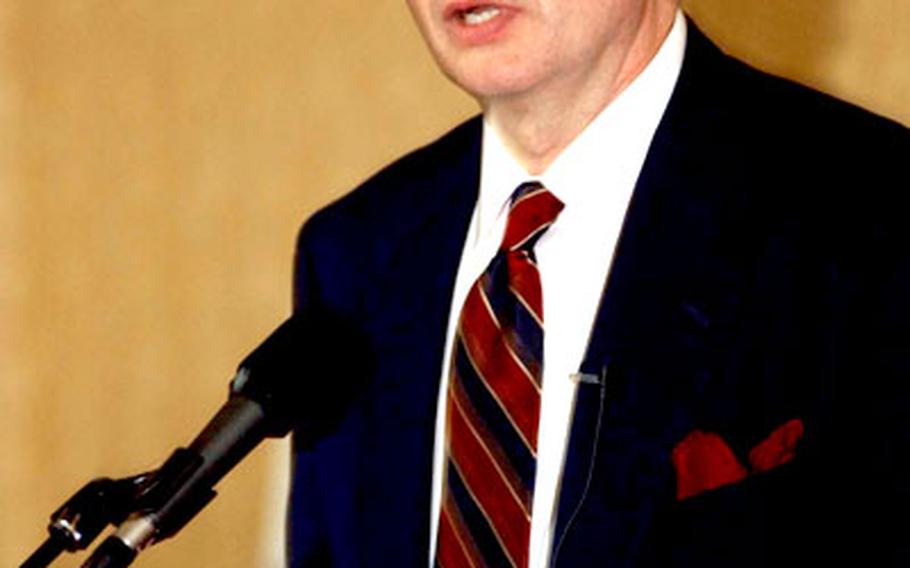 HEIDELBERG, Germany &#8212; Top military leaders rebuffed the comments of a controversial author and guest speaker at the Army&#8217;s Land Combat Expo in Heidelberg, in the wake of a series of harshly critical statements he&#8217;s made about Germans.

Ralph Peters, a retired U.S. Army lieutenant colonel, wrote a column for the New York Post last month describing the U.S. military&#8217;s 15,000-strong German work force as lazy and arrogant. In recent statements, he&#8217;s also attacked Germany&#8217;s contribution to the NATO alliance and the war on terror and accused the German army of still harboring a &#8220;deep fascist streak&#8221; for boycotting the expo in protest of his comments.

&#8220;I am extremely proud of the work force I have over here. Our German hosts, our German work force, our German citizenry has been extraordinarily accommodating to U.S. forces over here for the last several years.&#8221;

Bell, however, stood by his decision to invite Peters to speak at the expo.

&#8220;I invited Mr. Peters to come here and talk about terrorism. He is one of the recognized commentators on the insidious threat of terrorism around the world. He has a lot to offer,&#8221; Bell said.

Bell had been under pressure by German labor groups to withdraw his invitation to Peters.

Bell reiterated those comments at the close of Peters&#8217; presentation Tuesday at the expo before a standing-room-only crowd. A contingent of military police checked bags as troops, U.S. and German civilians filed into the room.

German police were also on hand.

Peters briefly defended his column and was careful to dance around offering an apology.

The uproar has left Army officials concerned for Peters&#8217; safety. Bell&#8217;s spokeswoman said Peters has been assigned a &#8220;personal security detachment&#8221; during his stay in Germany.

Meanwhile, Marine Gen. James L. Jones, the top commander of forces in Europe and military chief of NATO, said he was &#8220;disappointed&#8221; in Peters&#8217; comments.

Jones also added that he didn&#8217;t blame the German contingent for boycotting the expo.