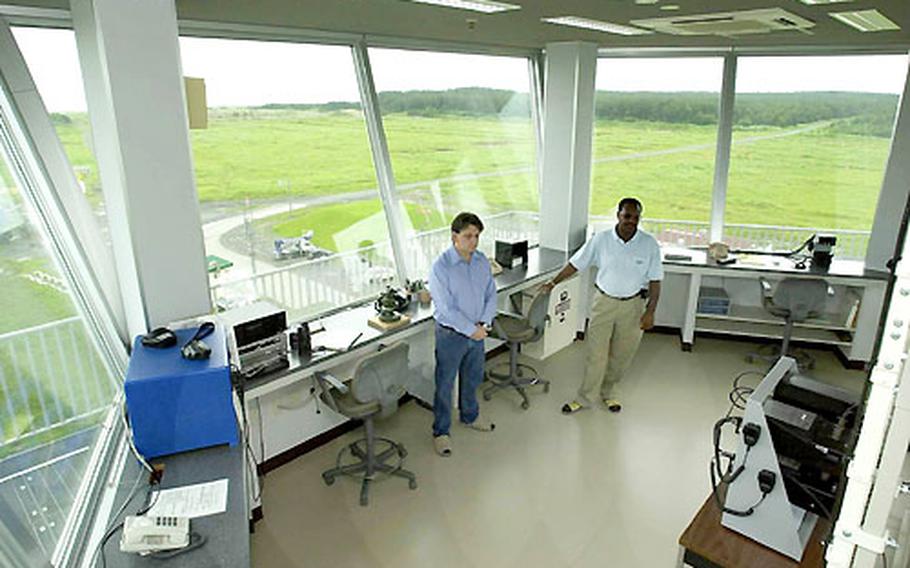 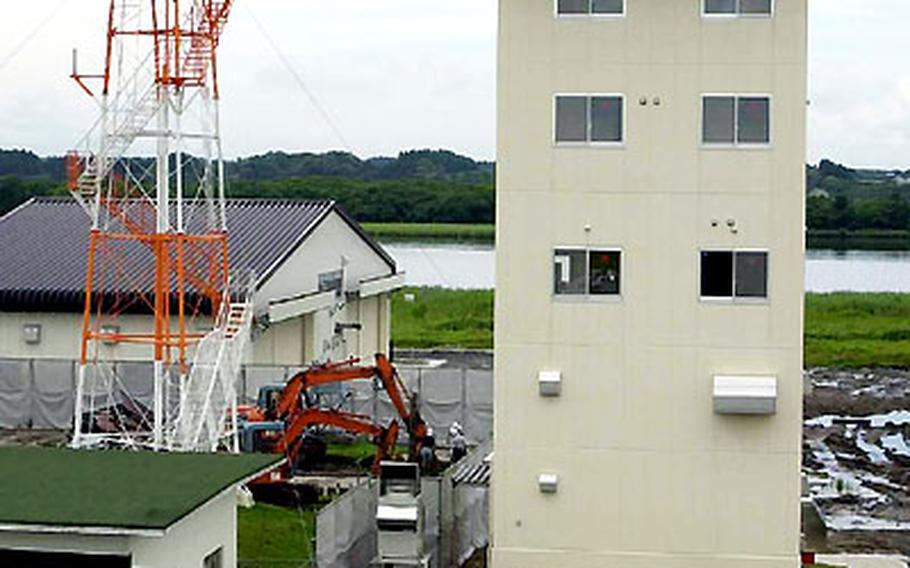 A range control tower built in 1960, left, will soon be demolished now that a new tower has been placed into service at Draughon training range, 10 miles northeast of Misawa Air Base, Japan. (Wayne Specht / S&S)

But American and Japanese fighter pilots from nearby Misawa Air Base never land aircraft at the 1,900-acre site, formerly known as the Ripsaw training range. They just pepper the landscape with inert 20 mm cannon rounds and practice bombs.

Built by the Japanese government as part of the Facilities Improvement Program, the tower is used to control and guide Air Force and Japan Air Self-Defense Forces fighters to targets on the range.

&#8220;Whenever winds exceeded 30 knots (34.5 mph), we had to remove people from the old tower because it became a safety issue,&#8221; said Tommie Johnson, site manager for Cubic Defense Applications Inc., the San Diego-based contractor operating the range for the Air Force. &#8220;That hampered our operations.&#8221;

Japanese workmen are set to dismantle the old tower in the next few weeks, leaving military range control officers and Cubic employees to work from the new tower&#8217;s gleaming cab perched 75 feet above ground.

Cubic senior field engineer Fred Pinnix said the new tower, initially requested 10 years ago, was built with substantial underpinnings. &#8220;Piles were drilled into the earth and rebar was used in the construction,&#8221; he said. &#8220;It&#8217;s a pretty substantial structure.&#8221;

Johnson, a former Air Force air traffic controller who retired in 1994, said the tower was built with the same specifications as air traffic control towers found at airports. From the tower&#8217;s cab, range safety officers have a virtually unimpeded view of the range and the Pacific Ocean to the east.

The cab, and a scoring room several floors below, are air-conditioned to protect sensitive electronic equipment. There&#8217;s a break room for employees on one of the tower&#8217;s lower levels.

Pinnix said the final installation of UHF-VHF radio equipment is nearing completion. The equipment is used to communicate with pilots streaking toward the range to strafe 25-foot-by-40-foot canvas targets hanging between telephone poles.

Microphones placed at each target detect pressure waves from 20 mm bullets striking the targets, he said. The data is then transmitted to a scoring device in the tower.

Until a new joint advanced weapon scoring system is installed at the range within the year, scoring accuracy of inert bombs dropped at the range is completed through a manually operated M-2 aiming scope.

A spotter stationed in a wooden tower on the north edge of the range observes where bombs strike marked areas on the range or impact tactical targets such as trucks and trailers. By using a plotting board and triangulation, Pinnix said, observers can measure the accuracy of bomb drops to within 1 meter of a target.

A new compact weather-monitoring system also is mounted on the tower. It provides pilots approaching the range with the latest weather data.

&#8220;There is a mutual understanding between 5th Air Force and the Defense Facilities Administration Agency that the cost of all host-nation projects will not be released to the public,&#8221; said Staff Sgt. Mikal Canfield, a base spokesman.

Accepted by the Air Force in June and placed into range service July 8, Johnson said the new tower even comes with a warranty.

The range was renamed earlier this year in honor of Seaman Matthew Draughon, a Navy diver assigned to the Sasebo-based USS Safeguard who died on May 5, 2001 while salvaging wreckage of a Misawa F-16 crash.