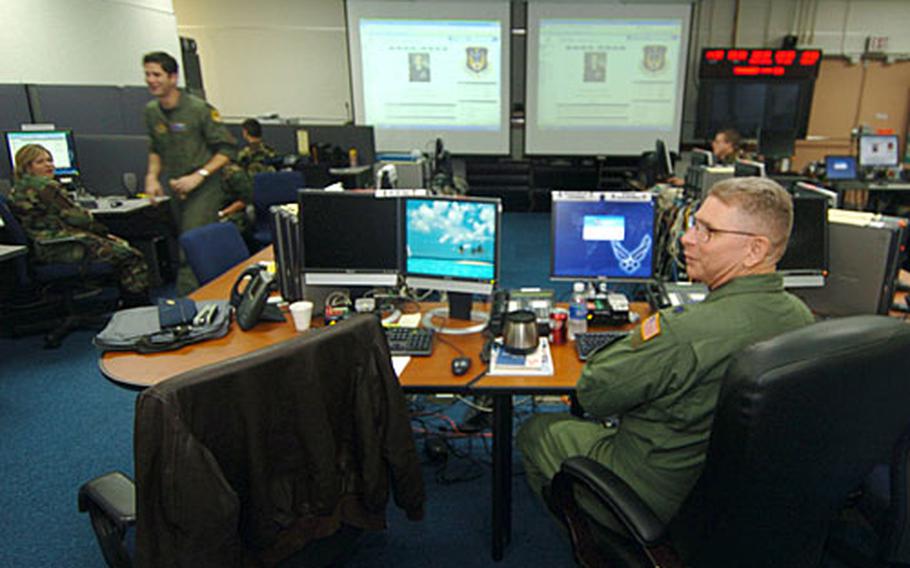 U.S. and Japanese forces work side-by-side in the Bilateral Joint Operations Coordination Center at Yokota Air Base, Japan. U.S. Forces Japan headquarters at Yokota features an underground complex with full command center capabilities in the event of a war or major regional emergency. For the past two weeks, it’s was used as a control hub for the Keen Sword exercise held at installations throughout Japan and Okinawa. (Christopher B. Stoltz / S&S)

There are computers all around tracking aircraft, ships and ground forces. In a separate room, ballistic-missile defense planners are on the lookout for enemy launches. High-ranking commanders sit down for battle updates piped in to the Crisis Action Team floor on large video screens. Classified and unclassified networks pump information along secure and unsecured lines.

Welcome to the secluded basement complex at U.S. Forces Japan headquarters on Yokota, which features full command center capabilities that can be fired up in the event a war or major regional emergency surfaces.

For the last two weeks, it&#8217;s been used as a control hub for Keen Sword, the massive field-training exercise held at installations throughout Japan and Okinawa. The Japan Self-Defense Force and all four branches of the U.S. military were slated to wrap up the 12-day drill Friday.

The Bilateral Joint Operations Coordination Center, or BJOCC, is equipped to run around the clock and can hold as many as 150 people working 12-hour rotating shifts.

The BJOCC was first stood up in February 2006 for the Keen Edge exercise. The 5th Air Force had used the old space prior to that.

An overhaul costing about $200,000 was completed last January, according to Air Force Maj. Jessica Luyando, the integrated air and missile defense operations and exercises officer for USFJ.

Keen Sword, meanwhile, hasn&#8217;t been quite as hectic as planned for some at the facility.

Non-critical flights of F-15 Eagle fighters were suspended pending an investigation into the Nov. 2 crash of an Air National Guard F-15C during training in Missouri.

When the JASDF&#8217;s Air Defense Command moves from Fuchu Air Base to Yokota in 2010 as part of realignment, officials plan to build a tunnel connecting the BJOCC to the new building, according to Luyando.