Contractors try to get jobs back after SOFA visas revoked 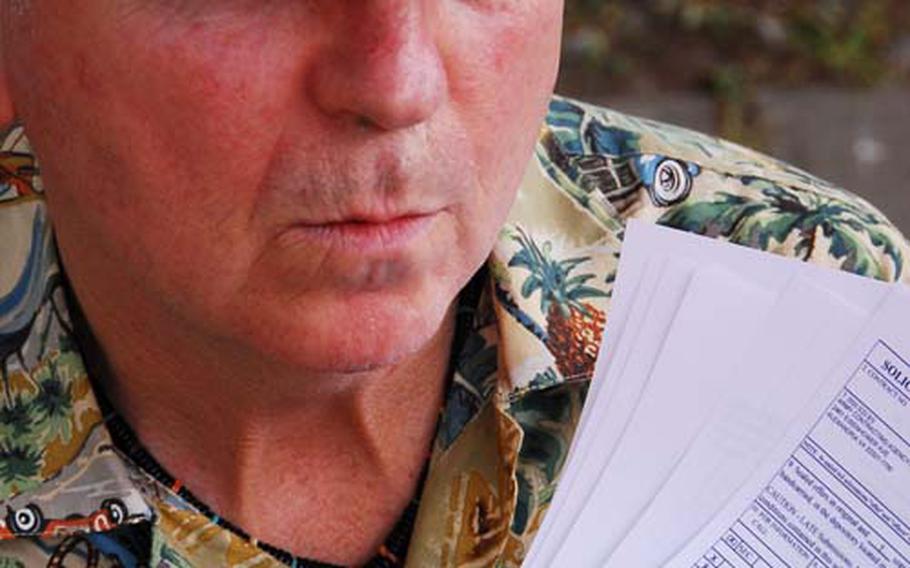 Sam Lacy, an Air Force retiree and former U.S. Forces Korea contractor, is one of at least 61 civilian contractors who have had their SOFA visas revoked since last summer, after an audit found that some contractors had wrongly been granted those visas. Many of those contractors say USFK never gave them a chance to defend themselves. (Ashley Rowland / S&S)

SEOUL &#8212; Dozens of former U.S. Forces Korea contractors who have lost the visas that let them work in South Korea are caught in a bureaucratic nightmare with no clear instructions on how to get their jobs back, many of them say.

At least 61 civilian contractors have had their status of forces agreement visas revoked since July, after the U.S. Army Audit Agency found USFK had mistakenly granted visas to people who weren&#8217;t eligible for them. The reason: They weren&#8217;t living in the U.S. when they were hired.

&#8220;They&#8217;ve been ignoring this clause in the regulation for the last 10 or 15 years, and all of the sudden they decide to enforce it?&#8221; said Sam Lacy, a retired Korean linguist with the U.S. Air Force who recently lost his SOFA status and his job at Osan Air Base.

For Lacy and nearly all the other affected contractors, losing their SOFA visas &#8212; which allow them to work in South Korea under the umbrella of the U.S. military &#8212; means losing their jobs.

USFK says contractors must be "ordinarily resident" in the U.S. and move to South Korea solely for their job with the military. But it can&#8217;t tell the affected contractors how to regain their SOFA status, other than to sever their ties with South Korea.

In general, that means leaving their homes, moving their belongings and family back to the U.S., and getting a job there. But there are no concrete guidelines for what to do or how long it takes to become "ordinarily resident" after returning to the U.S., said Col. Daniel Rosso, head of USFK&#8217;s Contracting Command Korea.

Some contractors say CCK has ignored their frequent requests for answers about their case.

Among them is Kathy Yum, an Army reservist who has worked as a computer instructor at U.S. Army Garrison-Yongsan for 15 years. Her company is trying to help her get a special visa available to some Korean-Americans that would let her remain in the country and keep her job, but if not she&#8217;ll have to leave the country by June 25.

She wants an apology from CCK for not answering her repeated letters and e-mails. She said CCK is "treating me like this is my fault."

"I&#8217;m not trying to blame anyone or say bad things about people, but at least answer my e-mails," said Yum.

The contractors say they shouldn&#8217;t be forced to leave because of the mistakes made by others. But Rosso said CCK has to revoke their visas to uphold the SOFA agreement between the two countries.

"We understand the severity of this. These are tough decisions," Rosso said. "These are people&#8217;s livelihoods and we understand that and we don&#8217;t take it lightly."

Many contractors say the definition of "ordinarily resident" is vague and is being interpreted too narrowly by a few people.

Sean Hayes, a Seoul-based attorney who has defended U.S. troops in South Korean court, said he doesn&#8217;t know why USFK is "putting people through a great deal of strife for something that is seemingly not so major."

"The Korean government doesn&#8217;t care about this after this length of time," he said.

His firm considered defending Yum, but decided against it because it would have meant trying the case in a U.S. court. He thinks the U.S. military is counting on attorneys being reluctant to defend contractors for the same reason.

Several South Korean government officials said they had not heard about contractors losing their SOFA status, nor had they asked USFK to check the contractors&#8217; visas. Rosso also said that South Korea had not asked for a review.

Many contractors said they believe USFK is trying to force them out in order to open up jobs for military spouses moving to South Korea under a new command sponsorship plan, which Rosso said isn&#8217;t true.

SOFA status lets civilians live in the country without paying South Korean taxes, work for the U.S. military and have access to base facilities including the commissary and post exchange.

The "ordinary residence" requirement is meant to keep South Koreans from filling jobs meant for U.S. citizens, according to a September 2008 PowerPoint presentation on SOFA issues.

The SOFA agreement between the U.S. and South Korea mentions "ordinarily resident" but does not define it. A USFK regulation from 1992 describes an "ordinary resident" of the U.S. as someone who lives there full time, and doesn&#8217;t just own a residence there.

CCK began reviewing all civilian contractors&#8217; SOFA statuses after a March 2008 audit of a contract that was allegedly being performed improperly. During that audit, which has not been released, the Army Audit Agency found that USFK had wrongly given some contractors SOFA status, Rosso said.

"It&#8217;s just one of those things, that we had people in the past who did not uphold the way the agreement was," Rosso said.

Those employees have since left CCK but were not forced out, he said. None will be punished for mistakenly granting the SOFA visas, he said.

CCK said it was unable to comment on individual cases because of privacy regulations. But Rosso said only contractors who clearly had been living in South Korea with the intent to stay there long term had their SOFA status revoked.

"I don&#8217;t see where the intent to stay here has anything to do with anything," said Lacy, who lived here on a tourist visa before being hired at Osan in 2004. "What should it matter where I was hired from? They needed an employee and I was there. I save the company money, and it saved USFK money from hiring me from here."

Contractors said CCK has given them no way to appeal the decision.

Around the beginning of February, 14 contractors penned a letter to the U.S. Government Accountability Office, the Office of Inspector General, U.S. congressional oversight committees, and several media agencies.

In it, they wrote: "We, as employees, are left defenseless."