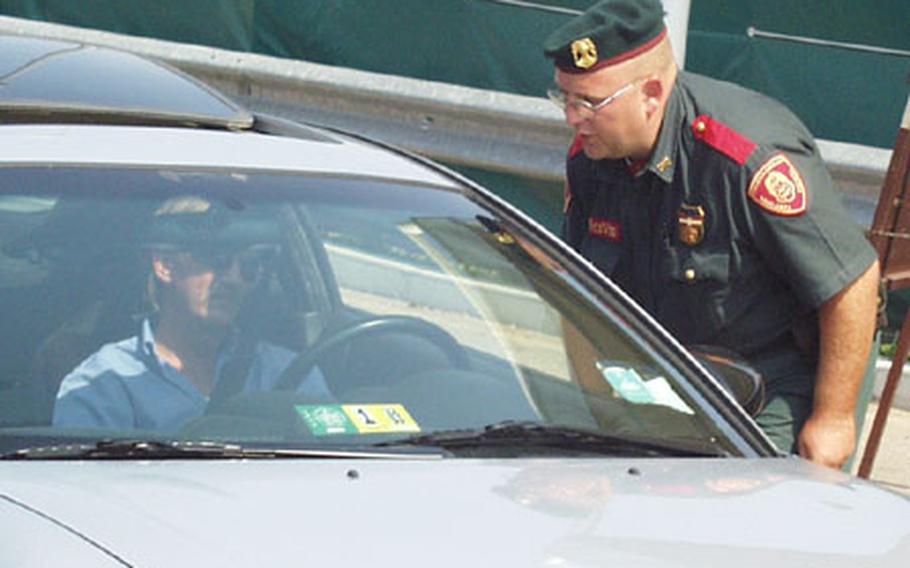 A CIVIS security guard talks with a motorist entering Caserma Ederle in Vicenza, Italy. Civilian security guards are guarding the entrances to the military base for the first time. (Kent Harris / S&S)

A CIVIS security guard talks with a motorist entering Caserma Ederle in Vicenza, Italy. Civilian security guards are guarding the entrances to the military base for the first time. (Kent Harris / S&S) 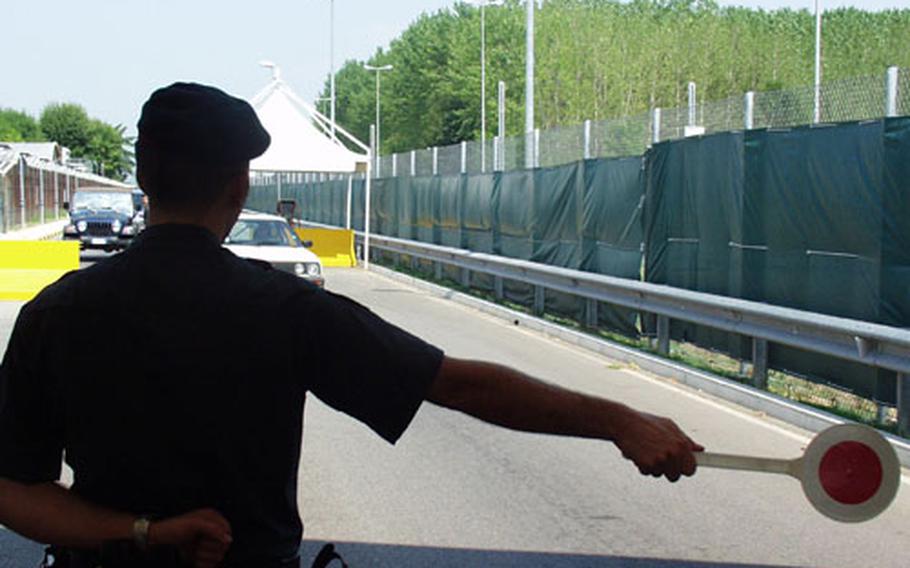 Starting this month, civilian guards are controlling the entrances to Caserma Ederle in Vicenza. It&#39;s an historic first at the American military base, which has never had civilians - Italians or Americans - responsible for checking people who enter the facility. (Kent Harris / S&S)

VICENZA, Italy &#8212; When members of the 173rd Airborne Brigade return from their deployment to Iraq, they shouldn&#8217;t have to worry about pulling gate guard duty anymore.

Civilian security guards have taken over monitoring the entry points to all the military bases that Americans use in Vicenza, Verona and Camp Darby. This month marked the first time that Italian nationals have been put on the front gates.

&#8220;Their primary mission is [to] relieve the stress we had on our soldiers,&#8221; said Larry Kilgore, a former command sergeant major of the 173rd who is back in Vicenza after retiring from the Army recently. Kilgore has been put in charge of handling the $30 million, five-year contract that the military signed with Centro Italiano di Vigilanza Interna e Stradale, also known as CIVIS.

Civilian security guards have been providing services to military communities in Germany for several years. But that hasn&#8217;t been the case in Italy for several reasons. Unlike in Germany, where the United States owns the bases it operates from, Americans in Italy work on Italian bases. So officers of the carabinieri, or Italian police, are a common sight at the gates. At locations such as Aviano Air Base, members of the Italian air force also are at the gates.

That meant, until terrorism concerns came to the forefront in the past two years, that not as many Americans were needed at the gates.

Italian bureaucracy can also be daunting.

&#8220;It is very difficult, because everyone has to agree,&#8221; said Obeid Shaikh, contracting officer for U.S. Army Contracting Command Europe, referring to the various agencies that have to sign off on such an agreement. The Southern European Task Force (Airborne) had been trying off and on to get such a deal for six years.

CIVIS, a company that has offices around the country, finally was awarded the contract. Its personnel all are required to have some background in the military or police forces. The company routinely guards banks and other businesses.

All of the guards are licensed and qualified to carry weapons. Before working for the Americans, they all have to undergo background checks and demonstrate a passable knowledge of English.

Giovanni Serra fits the bill on all those aspects. Originally from Naples, Serra served in the military for two years and has most recently worked as a civilian security guard at Aviano. He&#8217;s the equivalent of a staff sergeant for CIVIS, which assigns its personnel ranks similar to the military&#8217;s.

Less than a month into the agreement, Kilgore said the situation looks good. He said carabinieri officers will still be on duty and American soldiers will help as necessary. But, for the most part, the guards will be on their own.

Kilgore, who speaks Italian, said he&#8217;s planning to hand out surveys to those entering the gates to get some reaction.

The reaction in the Italian community has appeared to be positive. One local newspaper carried a headline that jubilantly proclaimed that a new sheriff was in town on the bases.

AVIANO Air Base, Italy &#8212; Civilian security guards have been used at Aviano Air Base since shortly after the terrorist attacks in the United States on Sept. 11, 2001.

Currently, they are responsible for guarding seven small outlying facilities. But they&#8217;re not present in the main areas where most people work.

&#8220;For now, there are no plans to contract such personnel for the gates of the base itself,&#8221; said Master Sgt. Michael Harris, who has been the noncommissioned officer in charge of physical security on base.

Harris said the guards have been doing good work at the facilities they&#8217;re at.