Army engineer Maj. Joe Gandara, right, works through an interpreter and his own version of international sign language to explain supplies he needs to renovate a new U.S. forward operating base in eastern Turkey. The U.S. is spending millions of dollars in local contracts to help prepare the way for a still-hoped for invasion force to pass through Turkey into Iraq. (Jon R. Anderson / S&S)

Army engineer Maj. Joe Gandara, right, works through an interpreter and his own version of international sign language to explain supplies he needs to renovate a new U.S. forward operating base in eastern Turkey. The U.S. is spending millions of dollars in local contracts to help prepare the way for a still-hoped for invasion force to pass through Turkey into Iraq. (Jon R. Anderson / S&S) 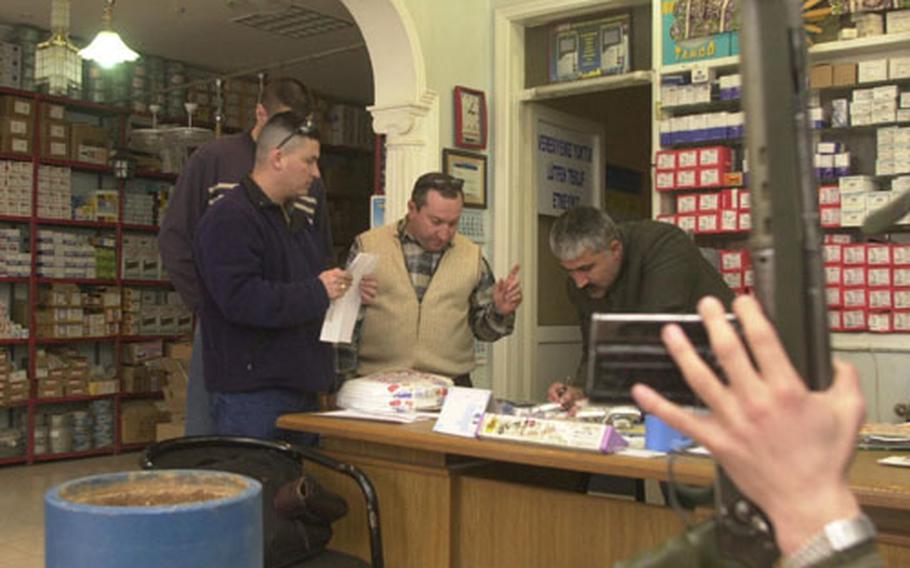 A team of U.S. Army officers negotiate with a Turkish electrical supply store owner in Mardin, Turkey, as their bodyguard looks on. (Jon R. Anderson / S&S)

KUWAIT CITY &#8212; From cooking chow for hungry grunts in Kuwait to serving as bodyguards for Afghanistan&#8217;s new president, civilian contractors have become a staple wherever U.S. troops are deployed.

In the dozen years since the first Gulf War, contractors have taken on substantial and shadowy roles in the Pentagon&#8217;s efforts to cut costs and free troops for operational tasks.

According to Peter Singer, a Brookings Institution scholar who studies the world of military contractors, the industry generates up to $200 billion a year for fewer than 1,000 companies offering privatized services like laundry, food service and construction.

In the first Gulf War, according to Singer&#8217;s research, there was one contractor for every 50 U.S. troops in the region. Now, there is one for every 10.

&#8220;It is a combination of doing jobs that the downsized Army no longer wants to do and tapping into the national resource that is retired military personnel,&#8221; said a senior official with Military Professional Resources Inc., a Virginia-based firm that has 90 observers and artillery controllers training U.S. troops in Kuwait.

Reflecting a larger wish by the industry to reveal as little information as possible, the senior official, a retired Army general who worked in intelligence and field artillery, agreed to an interview on the condition his name not be used.

It is a sign of how secretive and defensive many of the companies have become: Many of their contracts are deemed confidential by the Pentagon, and the companies stay out of the spotlight as much as possible.

MPRI trainers encountered in the field declined comment for this story, instead referring questions to corporate headquarters.

A spokeswoman for Brown & Root, a division of Halliburton, discussed the company and its projects in general terms, but did not talk about specifics on contracts.

In recent years, MPRI has won lucrative contracts to train and equip the fledgling Bosnian army and help form a transitional democratic government in Nigeria. It also ran Reserve Officer Training Corps programs at 217 universities before losing the contract to another firm.

Since 1999, MPRI has been in Kuwait, training the U.S. Army. In January, one of its employees was slightly injured in a training accident on the Udairi Range, but officials say the trainers would play no role in actual hostilities.

Other contracting firms complete a diversity of jobs. Contractors have reaped billions for construction in Bosnia and Herzegovina, laundry services in Afghanistan and dining halls in the southern Philippines.

RONCO was brought in for demining operations on bases in Afghanistan. DynCorp, another powerhouse of the military contracting world, is responsible for the safety of Afghan president Hamid Karzai. That job was originally performed by U.S. Special Forces.

Critics of the industry say ceding so much authority and granting secret contracts lead to a lack of oversight.

A 2000 report from the General Accounting Office found that contractors in Bosnia overstaffed 85 percent of its projects; companies are routinely asked to return millions in overpayments.

As for troops in the field, the military&#8217;s move to contractors brings some tangible benefits as well as serious concerns. Local workers take care of the dirty jobs like doing laundry and cleaning latrines.

&#8220;We get two hot meals a day and none of us have to do kitchen duty,&#8221; said Marine 1st Lt. Tara Burkhart, deployed to Camp Tarawa, Kuwait, with the 1st Force Support Services Group from Camp Pendleton, Calif.

As for concerns, soldiers question whether the reliance on contractors, who in turn rely on local national workers, creates security problems.

At bases throughout Kuwait, security forces say the most nervous moments are when long lines of local contract workers form at the gates.

At some of the other bases in Kuwait, security is contracted out to private firms. Military public officials and representatives of the private firms declined comment on screening procedures, citing force protection concerns.

In the larger picture, contracting firms say they are merely providing a service demanded by the Pentagon.

&#8220;If we weren&#8217;t there, the units would have to loan out observers from their own ranks,&#8221; the senior MPRI official said. &#8220;But that would not be very effective training. This way, they can train as a whole unit, just like how they would fight.