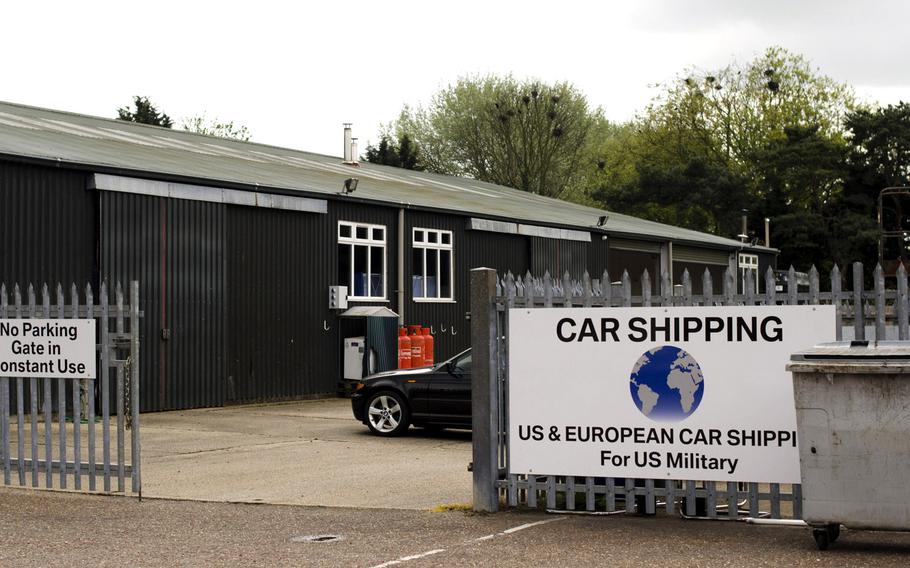 International Auto Logistics opened new vehicle processing centers, like this one in Mildenhall, England, when it took over the contract in May to ship servicemembers' vehicles. The company has faced criticism for late deliveries and not being able to provide accurate information about the location of vehicles. (Adam L. Mathis/Stars and Stripes)

WASHINGTON — The military’s troubled system for shipping privately owned vehicles appears to have dodged a major breakdown Wednesday after a dispute was settled by the main contractor and a subcontractor responsible for overseas transport.

International Auto Logistics, which took over POV shipping earlier this year, reached an agreement in Georgia court with Liberty Global Logistics after the subcontractor threatened to walk away last week over not being paid millions of dollars, according to a document obtained by Stars and Stripes.

The disagreement had threatened to shut down all shipment of private vehicles to military stations in Europe and was the latest bump in a contract that has angered thousands of servicemembers and drew fire from Congress due to long delays, vehicle tracking problems and customs paperwork snafus.

The terms of the agreement were not immediately disclosed by attorneys on either side of the case.

Last week, the subcontractor notified IAL that it was going to quit the contract, after complaining that the company had taken out an $8 million line of credit and had been late paying back $3 million.

“LGL’s Friday night letter promises nothing less than an intent to stop the Department of Defense’s global operation to move the privately owned vehicles of its servicemen and women who are being transferred to and from their overseas duty stations,” according to the International complaint.

International appealed to a federal judge who issued an injunction over the weekend stopping LGL from walking off the job Monday morning.

The two companies were set to appear before a Georgia federal court Thursday for a hearing on the dispute but that was canceled after they jointly filed a notice of the agreement. Both must appear in court in early November to ensure the pact is holding.

As the subcontractor crisis receded, questions over the IAL contract remained.

Sen. Mark Warner, D-Va., said this week that the subcontractor dispute raised more questions over whether the company can do the job. He told the DOD earlier this week that it should consider terminating the contract if performance does not improve.

In August, the DOD sent out an emergency task force to help the company fix its foundering delivery system after months of complaints and found that it was not properly tracking vehicles sent by ship. The department said chronic delays were also due to the high number of military vehicles shipped during the summer as well as a lawsuit with the prior contractor that delayed IAL’s takeover.

U.S. Transportation Command, which oversees the contractor for DOD, told Stars and Stripes this month that service is improving but declined to provide statistics on vehicles.

Meanwhile, complaints over delays continue and a Facebook page for frustrated customers has over 4,800 members, with hundreds currently active, according to a page founder.