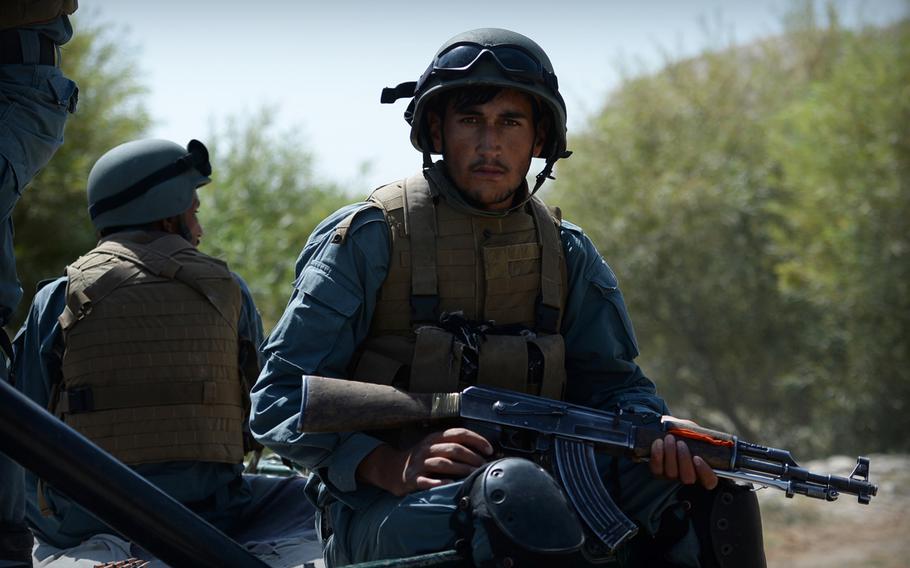 An Afghan policeman rides in the back of a truck during a patrol in Helmand Province on Sept. 23, 2014. Afghan security forces sustained heavy casualties during fierce fighting in the province over the summer. (Josh Smith/Stars and Stripes)

An Afghan policeman rides in the back of a truck during a patrol in Helmand Province on Sept. 23, 2014. Afghan security forces sustained heavy casualties during fierce fighting in the province over the summer. (Josh Smith/Stars and Stripes) 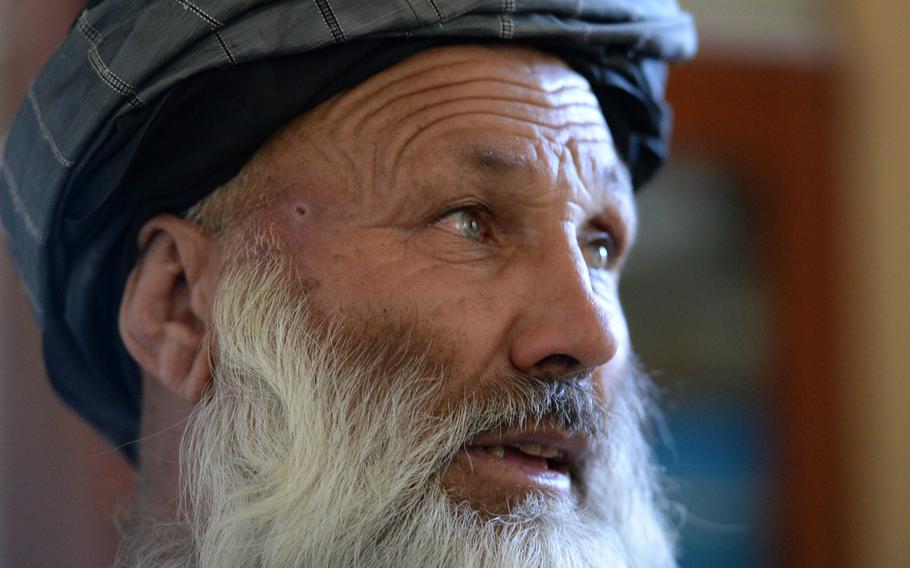 Afghan farmer Haji Mohammad Hydar says he is moving his family from their long-time home in Sangin district, to Lashkar Gah, the capital of Helmand province. After years of braving the ongoing violence in the area, the lasted round of fighting forced Hydar to seek a safer home. (Josh Smith/Stars and Stripes) 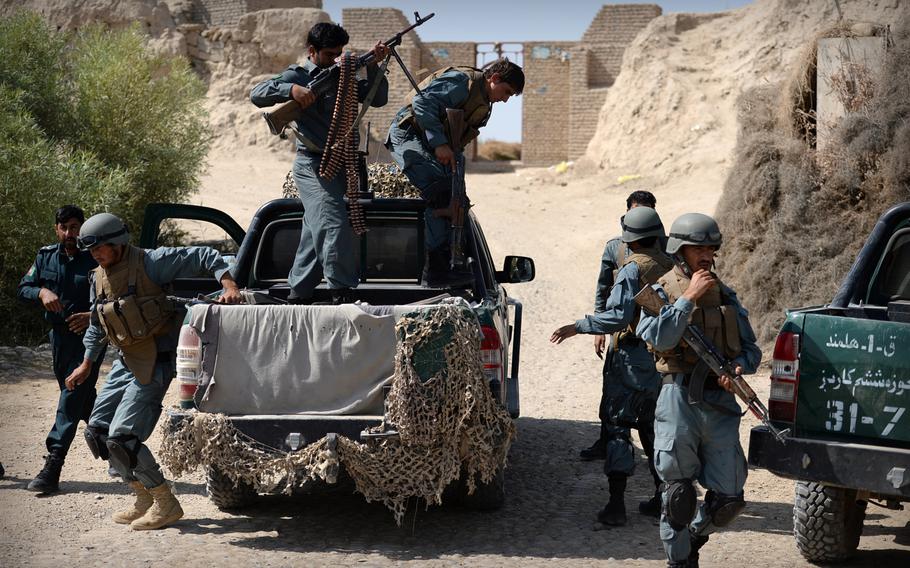 Afghan policemen dismount from a truck during a patrol in Helmand Province on Sept. 23, 2014. Afghan security forces sustained heavy casualties during fierce fighting in the province over the summer. (Josh Smith/Stars and Stripes) 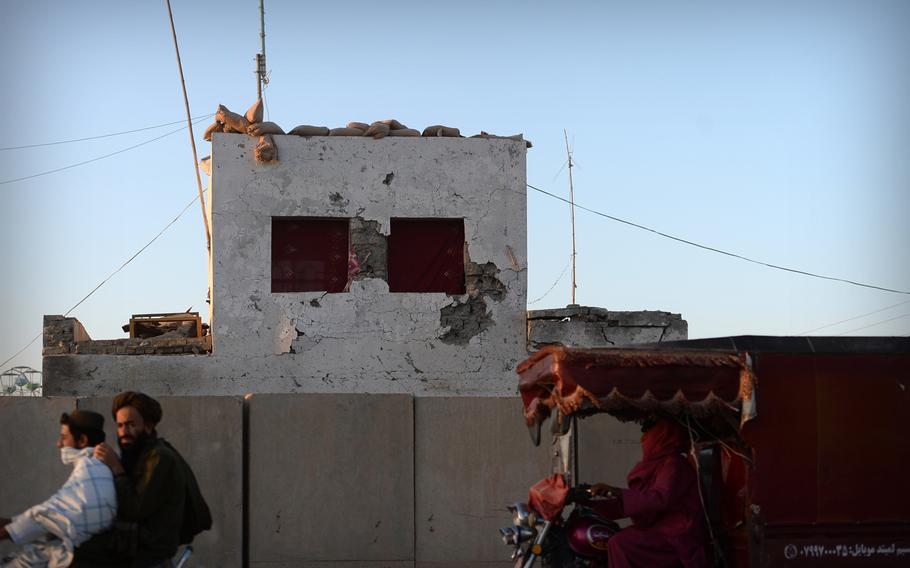 A police checkpoint on the outskirts of Lashkar Gah sits damaged a day after Taliban insurgents attacked it with a car bomb and automatic gunfire on Sept. 21, 2014. Residents of Helmand say violence in the northern part of the province has them worried about the future. (Josh Smith/Stars and Stripes) 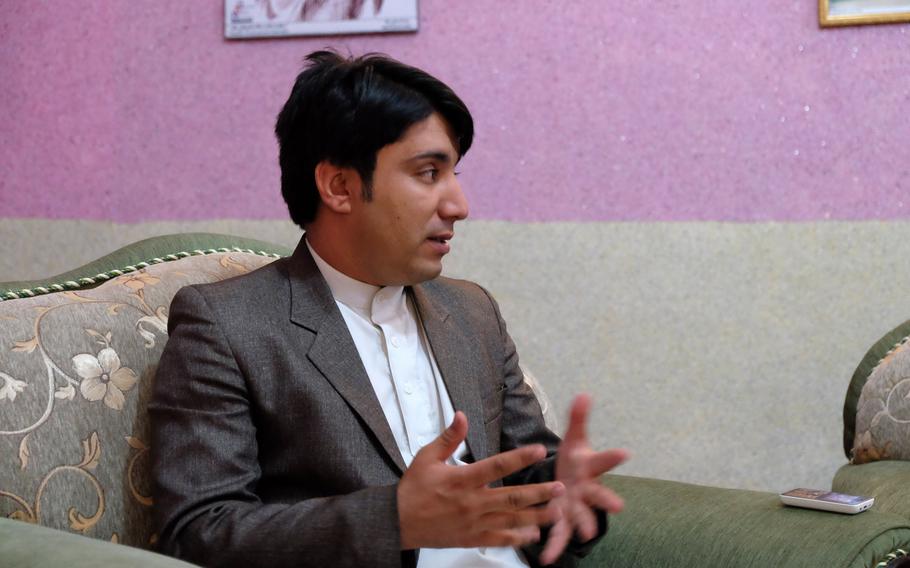 ?We are exceptionally grateful for ISAF," said Omar Zwak, spokesman for the Helmand provincial governor. Zwak insisted that despite heavy fighting in some districts over the summer, Afghan forces have the upper hand. (Josh Smith/Stars and Stripes)

LASHKAR GAH, Afghanistan — Since the time of Abraham.

That’s how long Afghan farmer Haji Mohammad Hydar says generations of his family have lived in the area of Afghanistan that now falls in the Sangin district of Helmand province.

Just months after the last U.S. Marines left Sangin, Hydar’s family — which stuck it out through the Soviet invasion and through more than 10 years of fighting between NATO and the Taliban — is moving to this provincial capital, an outpost of government control increasingly pressured by resurgent Taliban fighters.

Last Sunday, British forces and U.S. Marines announced the end of their combat operations in the region, lowering their flags at the combined camps of Bastion and Leatherneck. The massive base, which has been a fixture in Helmand for most of the coalition’s war, hosted the headquarters of Regional Command Southwest and as many as 40,000 personnel at its height.

“The formal end of U.K. combat operations in Afghanistan marks the final step in a deliberate, responsible and measured handover to the ANSF (Afghan National Security Forces),” Brigadier Rob Thomson, the top British officer in Helmand, said in a statement.

That’s far from clear to even the staunchest government supporters, however. Helmand became by far the deadliest province for NATO’s International Security Assistance Force, with nearly 1,000 coalition fatalities during the 13-year war. And despite officially ending combat operations at the end of 2014, ISAF now says it might continue to provide air support at the request of Afghan forces during the follow-on Resolute Support mission. That mission, focused on advising and training, begins in January.

In those districts hit hardest by fighting, the steady stream of insurgent attacks often leaves even supporters of the foreign troops disillusioned and fearful as the coalition withdraws.

“There was war before the foreign troops arrived, there was war while they were here, and there will be war after they leave,” Hydar told Stars and Stripes. “What kind of result is that? No peace, no security.”

The 1,000-yard stare Peering out from between a large turban and a long white beard, Hydar’s blue eyes have the piercing 1,000-yard stare all too common in an Afghanistan torn by decades of war and its horrors.

His son died in 2012 during a firefight between U.S. Marines and Taliban militants near their farm. Earlier, Hydar’s brother was killed during a similar engagement between insurgents and Afghan government forces.

Only now have the horrors become too much for Hydar.

“It is much worse than in the past,” he said. “Before, you knew where the fighting was and you could avoid it. Now, there are bombs everywhere. We are not safe anywhere.”

That’s a refrain often repeated here. In recent months, even local journalists have begun arming themselves out of fear of becoming targets.

“When I write my book about the situation here, I plan to call it ‘Why I Bought a Pistol,’” said one reporter, who asked not to be named for his own security.

Still, Afghan government officials insist that the situation is under control.

“The Taliban launched several coordinated attacks, but they were vanquished and defeated by our defense forces,” said Omar Zwak, spokesman for Helmand’s governor.

ISAF spokesman Maj. Paul Greenberg said that because of efforts by Afghan forces, “insurgent networks have become ineffective in Helmand province,” but that coalition support would continue under the Resolute Support mission that begins next year.

“As Regional Command Southwest ends its mission and ISAF transitions to Resolute Support in 2015, ISAF will link the ANSF in Helmand to an adviser team in Kabul that will continue to support institutional development and sustainment,” he said in a statement to Stars and Stripes. “This will include continued aviation support by ISAF, upon request of the ANSF, and the further development of the [Afghan air force].”

Zwak said ISAF had made a “remarkable difference” in the province: “We are exceptionally grateful for ISAF.”

The drug trade factor While most locals, including members of the security forces, expressed gratitude for foreign assistance, they scoffed at government assertions that all was well.

The sheer ferocity of the fighting in Sangin and neighboring districts has subsided somewhat since earlier in the summer, said one Afghan National Army officer, who asked not to be named because he is not authorized to speak publicly about the situation. But clashes continue, he said, and improvised bombs continue to take a terrible toll on both civilians and security forces.

The police and army forces face a variety of threats as they try to stabilize the province, said Col. Mohammad Wais Samimi, deputy security chief for the police in Helmand province.

The Taliban aren’t the only ones who stand to benefit from a deteriorated security situation. Samimi said insurgent forces often feed off of infighting among local warlords, including members of the national parliament, some of whom had close relationships to the government in Kabul and who field heavily armed militias of their own.

During an interview at his office in Lashkar Gah, Samimi was interrupted by calls from his officers in the city who were forced to intervene between two such armed groups that had begun to fight.

“The Taliban benefit from this situation, because if we ever try to move against [the warlords], we are pressured by the government,” he said.

“I had a close friend who was an American Marine, and they helped us with education and support,” he said. “But without that support, we will face many problems. Thirty of my men have died because we didn’t have the ability to evacuate them.”

Habiba Sadat, a member of parliament who represents the province, said Afghan national security forces are fighting hard, but it may not be enough.

“Sometimes the fighting lessens, but it hasn’t stopped,” she told Stars and Stripes. “We have talked to the security officials as well as the president to ask them to do something, but still the fighting is going on. It doesn’t mean that the ANSF aren’t active out there; they are losing their lives to defend Helmand. Unfortunately, the security forces are trying their best to defend the province, but they don’t have enough equipment and logistics to fight in the long term.”