Contagion, and a sense of humor 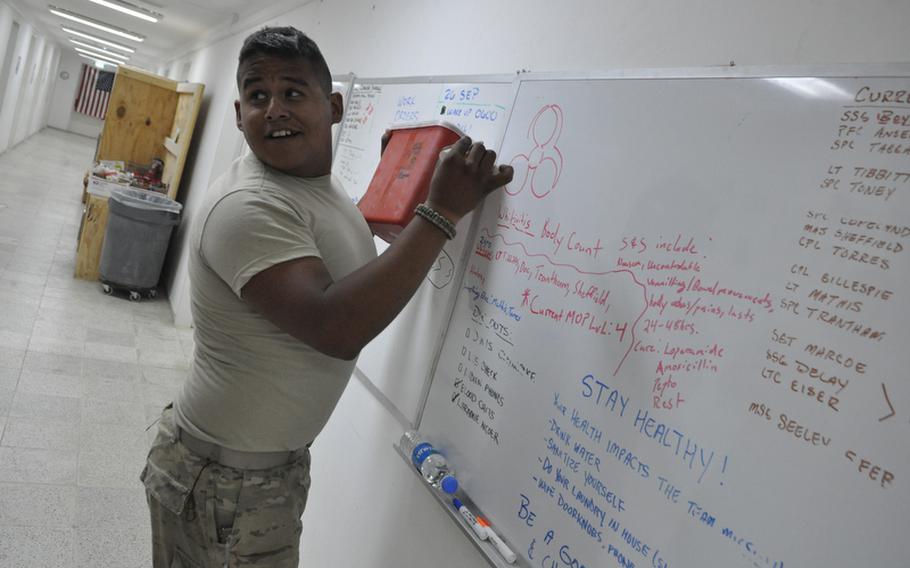 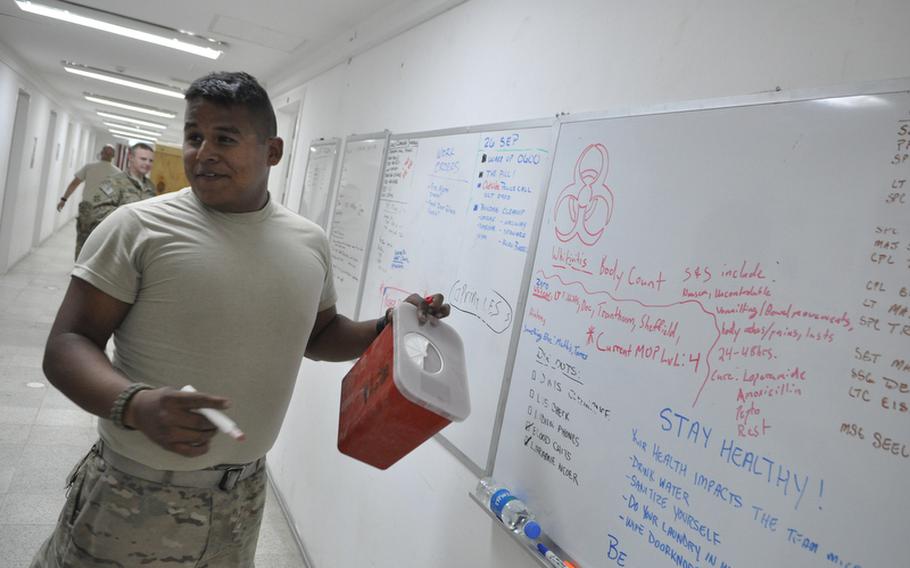 Buy Photo
Spc. Steven Miramontesjokes with unitmates after drawing a biohazard symbol above the names of soldiers in his unit who&#39;ve become sick. (Neil Shea/Stars and Stripes) 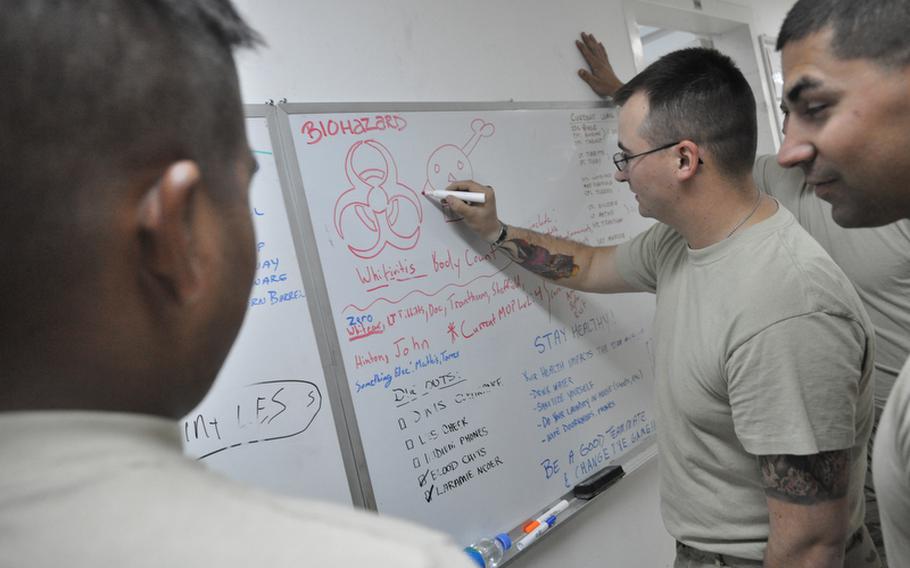 Buy Photo
Cpl. Trevor Gillespie, a medic, draws a skull and crossbones above the names of sick men in his unit. Gillespie himself was one of the first to fall to a fast-moving bug. (Neil Shea/Stars and Stripes) 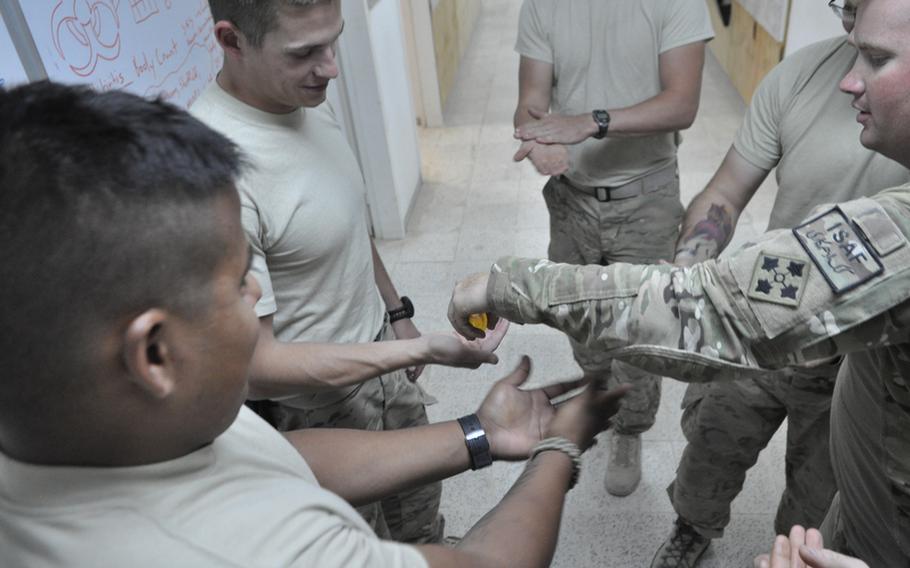 Buy Photo
Spc. Patrick Taggart dispenses hand sanitizer to men in his unit. Several members of this small Security Force Assistance Team have fallen ill in the last week. "It&#39;s funny, as long it&#39;s not you," one soldier said. (Neil Shea/Stars and Stripes)

KANDAHAR, Afghanistan &mdash; From the bathroom, the sound of retching.

From the hallway, the sound of laughter and men&rsquo;s voices echoing.

A virus is moving through the men of this unit, a Security Force Assistance Team assigned to mentor members of the Afghan National Civil Order Police. The blitz bug puts them down for a day or two. It is short, violent, and &mdash; to the still-healthy &mdash; pretty funny.

Spc. Thomas Trantham doesn&rsquo;t answer. By the following afternoon, he&rsquo;ll be fine, but for now, he&rsquo;s locked in the toilet and isn&rsquo;t looking to drink anything. I feel for him. Several weeks ago, during a visit to Bamiyan province, I caught something similar. It lasted a week; I lost 10 pounds. People were sympathetic, but they still laughed. It&rsquo;s amusing when it&rsquo;s not you. Still, we can all agree on something: it sucks to be sick in Afghanistan.

For a small unit like this, with some 15 soldiers, a few officers, and a handful of civilian police trainers, a fast-moving illness can become more than a nuisance. It can erase a week&rsquo;s work and chew up resources. The army worries about such illnesses. It plans for them, trains for them, publishes lists of rules and guidelines to reduce their occurrence. But that&rsquo;s Big Army.

In the hallway, medic Cpl. Trevor Gillespie takes me through a time line of the illness like a doctor studying a creep of plague. On a white board he has written the names of all those affected &mdash; seven so far. Spc. Samuel Whitear was Patient Zero; he fell ill a few days ago. On thewhite board, Gillespie has named the illness after him: Whitivitis.

&ldquo;He was the monkey from &lsquo;Outbreak,&rsquo; &rdquo; says Spc. Patrick Taggart, laughing and not yet sick.

After Whitear, the illness leapt through the others, an insurgent from another order. Gillespie was third down.

&ldquo;Ugh,&rdquo; is about how he sums it up. In the crooks of his arms, red dots from where another soldier, Pfc. Matthew Anselmo, jabbed him a few times with a needle, trying to start an IV.

&ldquo;Yeah, that was mostly so I could let him practice,&rdquo; Gillespie says.

&ldquo;No, he was dehydrated enough that his veins were sunken,&rdquo; Anselmo says.

As we stood by the board, Maj. James Sheffield, the SFAT&rsquo;s executive and operations officer, moved gingerly down the hall. He is recovering, mostly. He just ate for the first time in 24 hours.

&ldquo;It already started affecting us today,&rdquo; he says. &ldquo;We had to start pulling people for missions that we normally wouldn&rsquo;t. If it got much worse we&rsquo;d just have to shut down operations until everyone was better.&rdquo;

The night before, unit commander Lt. Col. Benjamin Eiser told the men to clean and mop their bedrooms, hoping to block Whitivitis. Later, after one soldier didn&rsquo;t quite make it to the bathroom in time, Sgt. Maj. Kevin Seeley hauled three mop buckets into the hallway and set them outside the soldiers&rsquo; doors, like a father placing a bowl by a child&rsquo;s bed, just in case.

&ldquo;The air was rich with the scent of hand sanitizer, Clorox and vomit,&rdquo; Seeley says. &ldquo;There are a lot of interesting smells in this country. Last night they were all in our hall.&rdquo;

At the whiteboard, Spc. Steven Miramontes laughs and draws the biohazard symbol above the names of the sick. Gillespie takes the pen next, sketches a skull and crossbones. Below it a note reads &ldquo;Stay Healthy!&rdquo;

&ldquo;If we had another room, we might set up a quarantine,&rdquo; Anselmo says.

But they don&rsquo;t. So the soldiers gathered in the hallway do what they can, one more time. Taggart pulls out a bottle of hand sanitizer. Men shoot out their palms. The first movements of a ritual. Taggart, grinning, douses them all.