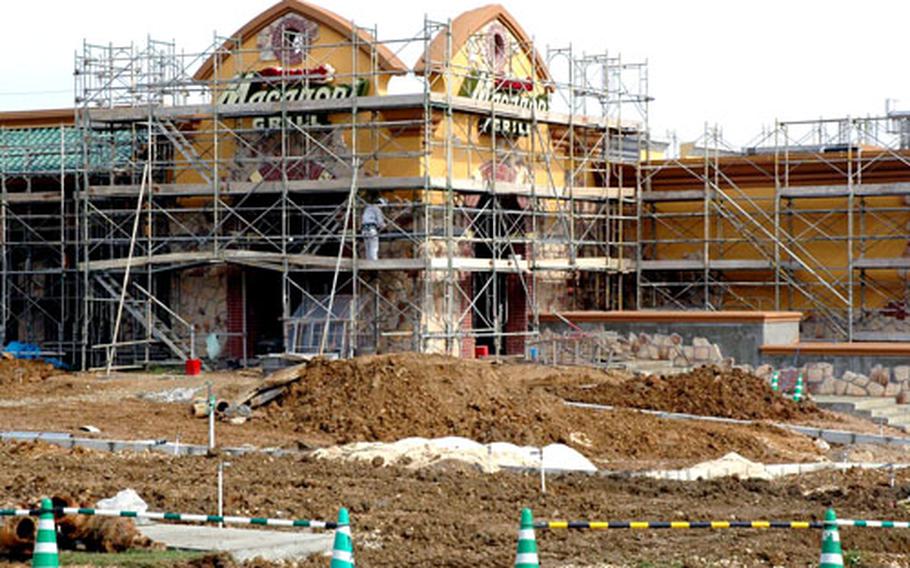 Macraroni Grill, a $5.5 million Marine Corps Community Service project, is nearing completion on Camp Foster, Okinawa, next to the Westpac Inn. It is scheduled to open in June. (Courtesy of USMC)

Macraroni Grill, a $5.5 million Marine Corps Community Service project, is nearing completion on Camp Foster, Okinawa, next to the Westpac Inn. It is scheduled to open in June. (Courtesy of USMC) 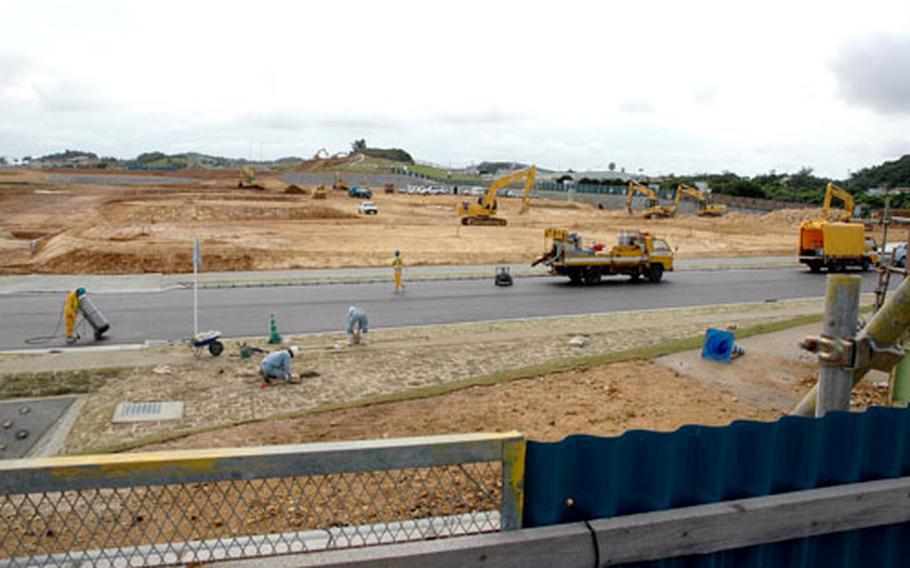 On almost every part of this facility, home to the Marine Corps Bases Japan headquarters, dump trucks constantly haul dirt from the site of a new housing area and the steel skeletons of new buildings change the skyline.

Come back in a year or so and you can feast at a new Italian restaurant, Macaroni Grill, opening next to the WestPac Inn, or you can drive through a new neighborhood of roomy, two- and three-bedroom multiplexes where 50-year-old concrete boxes once stood.

It&#8217;s all part of a $400 million face lift, much of it resulting from a plan to close nearby Camp Lester and eventually move Lester&#8217;s family housing, middle school and U.S. Naval Hospital to Camp Foster.

The most recent additions, a tunnel under Highway 330 connecting the Kishaba Housing and headquarters area to the main base and a new 4,900-square-foot gym, opened earlier this year. The next big move is reopening the widened and straightened Montana Street this weekend, connecting the post office-base exchange area to Guadalcanal Road near the Foster Shoppette.

The road improvement &#8220;will make driving much safer and eliminate some of the traffic congestion in that area,&#8221; said Navy Cmdr. Mike Williamson, Marine Corps Bases Japan public works officer. &#8220;It ought to make life a lot easier.&#8221;

The improved street passes a barren bit of landscape that once was the East Chatan housing area. It&#8217;s now being prepared for a $79 million enlisted housing project that includes 130 three-bedroom units and 30 two-bedroom units.

Camp Lester was earmarked for closure in a 1996 bilateral agreement to return 21 percent of the land U.S. military bases occupy on Okinawa. Eventually, the U.S. Naval Hospital on Lester will be replaced with a new complex on Camp Foster, where part of Futenma Housing is slated to be razed.

Another section of Futenma Housing also is to be razed and returned as part of the pact.

The new hospital, to be about 55 percent larger than the current one, is to be built in 2009, according to Japan&#8217;s Defense Facilities Administration Agency.

Williamson said other projects include a $3.4 million base electronics and communication shop along Stillwell Drive, to be finished this month, and a $17 million warehouse along 6th Division Road to be opened in December.

He said crews soon will tear down the old Gunner&#8217;s Gym and Joint Reception Center building.

The next major housing construction will be in the Plaza and Kishaba housing areas, Williamson said. But those are years away.

Eventually, most single-family housing units in Kishaba housing are to be replaced by multi-housing units, and a new middle school across from Zukeran Elementary will replace Lester Middle School.

Another major project is replacing Awase Meadows Golf Course in 2008 with a new course on a section of the Kadena Ammunition Storage Area. The current course&#8217;s 116-acre property is slated for return.