Construction to begin this winter on Romania bases 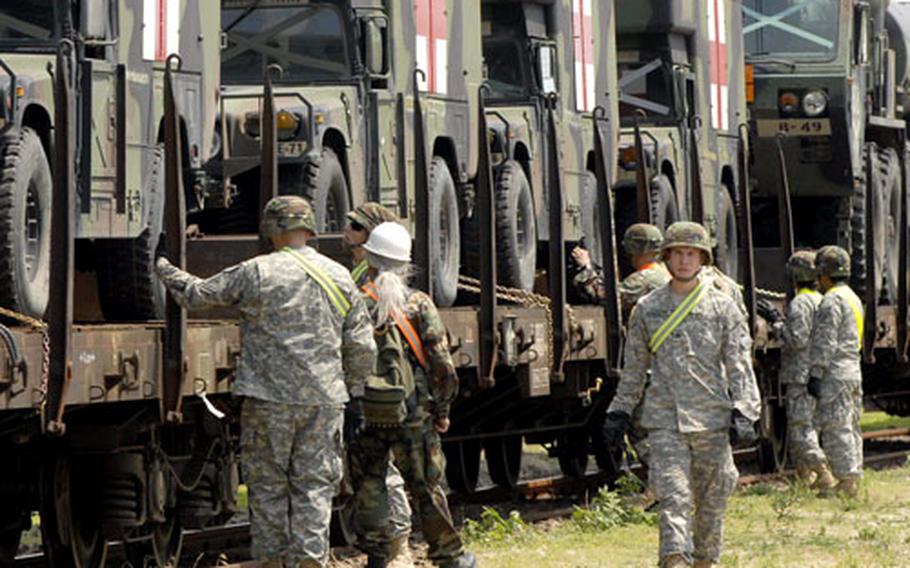 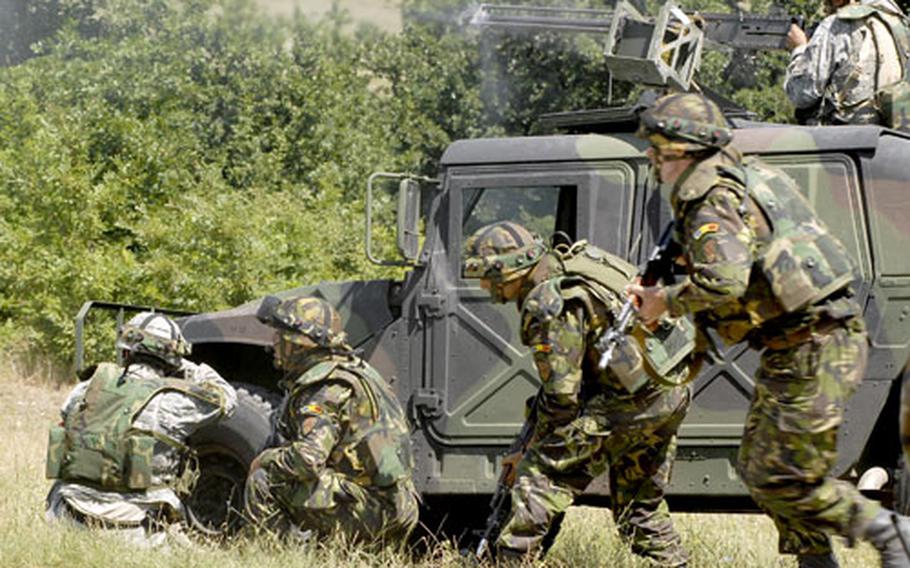 A squad of soldiers maneuvers to engage the enemy during a convoy ambush training exercise at the Novo Selo Training Area, Bulgaria, in July. (Gary L. Keiffer / U.S. Army)

Construction is expected to begin this winter at bases in Romania that next year will start hosting regular rotations of U.S. forces.

The two bases &#8212; at and next to Mihail Kogalniceanu air base in Constanta &#8212; will be the nexus for Joint Task Force East, an Army-led training operation in Romania and Bulgaria to begin next summer.

When the task force comes up to full speed in 2008, it will bring in U.S. brigades of 3,000 or more soldiers, who would be based in the two Black Sea countries for about six months at a time. The troops would train among themselves and alongside host-nation forces before returning home.

The task force will start by hosting smaller rotations in Romania during the summer and fall of 2007 and the winter of 2007-08, according to Maj. Gen. Mark P. Hertling, operations chief and deputy chief of staff for the Heidelberg, Germany-based U.S. Army Europe.

About 900 soldiers, or one squadron, from the Vilseck, Germany-based 2nd Cavalry Regiment is scheduled to deploy around July. A second squadron from the regiment would follow. Both of those training missions are expected to last about four months.

The bulk of the winter and spring construction, once funding is approved by Congress, will be performed at a base next to Mihail Kogalniceanu, which is home to a Romanian mechanized brigade, Hertling said.

&#8220;Most of the buildings there, we have to tear down because of asbestos and some problems with wiring,&#8221; Hertling said. &#8220;This is where the majority of our money will go to build this forward operating site. This is where most of the soldiers will be housed initially.&#8221;

Soldiers from the initial 2nd Cavalry deployment would be staying there, Hertling said. The task force headquarters would be at the adjacent airfield.

The U.S. in December reached an agreement with Romania on using its Smardan Training Range, Babadag Training Area and Rail Head, and Mihail Kogalniceanu air base, all in the southeastern part of the country, as well as the centrally located Cincu Training Range.

In April, the U.S. and Bulgaria reached agreement on using that country&#8217;s Novo Selo training area, near Sliven, as well as two air bases in Bezmer, near Sliven, and Graf Ignatievo, just north of Plovdiv.

JTF-East, which was originally called Eastern European Task Force, will be commanded by a one-star Army general, Hertling said. The task force would include a number of personnel from the Air Force, which will be using the Constanta air base as well as ones in Bezmer and Graf Ignatievo, Bulgaria.

Personnel from other service branches, as well as from the Romanian and Bulgarian militaries, would be working for the task force.