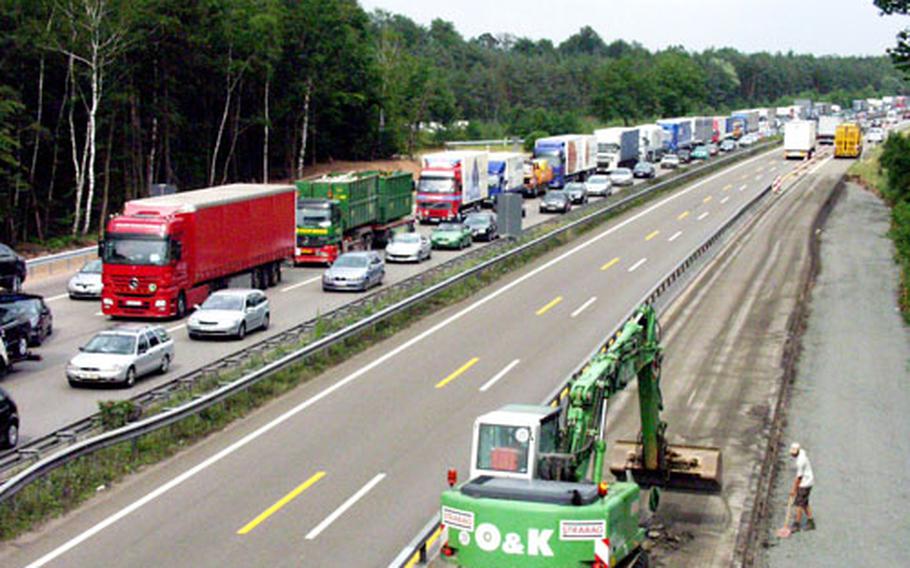 Westbound traffic along Autobahn 6 inches forward on a recent afternoon in the Kaiserslautern military community in Germany. The A6 is undergoing massive construction in preparation for next year’s World Cup soccer championship. (Steve Mraz / S&S)

KAISERSLAUTERN, Germany &#8212; If you think the traffic in the Kaiserslautern Military Community is frustrating, wait until you read the next sentence.

The traffic won&#8217;t improve until this time next year.

And it&#8217;s all because of the sport Europeans refer to as football and we call soccer. That&#8217;s right. If you needed another reason to hate soccer, the traffic you will rot in for the next year is it.

In preparation to serve as one of 12 German host cities for the 2006 World Cup, Kaiserslautern is widening and improving the section of Autobahn 6 that runs to its north.

Massive construction and lane closings on the A6 have motorists relying heavily on two alternative routes: B40 and B270. Truck drivers also are using those roads to avoid tolls.

As a result, traffic on those two routes congeals daily. Summer construction on entrance gates to Ramstein Air Base and Vogelweh isn&#8217;t helping the situation.

The drive from Vogelweh to Ramstein Air Base that normally took around 15 minutes can last as long as 45 minutes now. Catch the traffic along the B40 at the wrong time, and it can take an hour to get from Landstuhl Regional Medical Center to Pulaski Barracks &#8212; three times the normal amount of time.

The routes are widely traveled by the roughly 54,000 Americans who live in the Kaiserslautern area.

&#8220;Going home and going to work is hell for two hours each day,&#8221; said Roberto Braga, who recently retired from the Air Force and was stationed at Ramstein.

A recent tour during afternoon rush hour around the KMC found stop-and-go traffic on the A6, B40 and B270.

&#8220;Everything is piling up because everybody is trying to avoid the traffic on A6,&#8221; said Willi Hoelker, police supervisor and accident investigator with the 569th U.S. Forces Police Squadron.

One route to bypass the traffic is to take the B270 toward Hohenecken and stay on it until you see the Seehotel. Take a right on the road after the hotel and follow it through Queidersbach and Bann. Follow signs for the A62. Using those directions, it will take you roughly 20 minutes to get from Vogelweh to the A62 near Landstuhl.

A shortcut from Ramstein to Vogelweh that is being used more and more is Von-Miller-strasse. The road winds through an industrial area and will take you from Midway Plaza in Einsiedlerhof to Opel Circle just near the entrance to Rhine Ordnance Barracks in less than 10 minutes.

Howell would prefer that that shortcut remain somewhat of a secret.

Accidents on highways in the Kaiserslautern military community: