Construction pace picks up at training sites in Germany 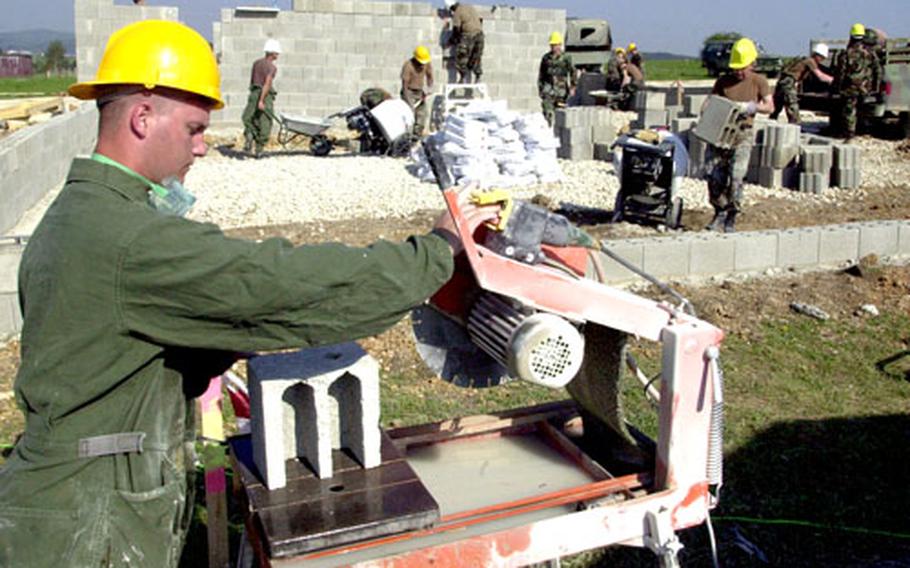 HOHENFELS, Germany &#8212; The Joint Multinational Readiness Center has doubled the size of a construction program, using Reserve troops as it moves to increase the number and size of fake Iraqi and Afghan towns in the training area.

JMRC master planner Canut Ogaard said the program&#8217;s budget included $1 million to transport the troops to Germany from the U.S. and $500,000 for materials. But it saved the government $2.5 million to $3 million in labor costs, he said.

Building 10 concrete structures on a lane used for training how to handle roadside bombs.Adding 500 yards of roads to the lane.Building another milelong supply route lane.Converting dozens of metal containers to serve as mock buildings.Working on roads and an airstrip inside the training area.JMRC Reserve component liaison officer 1st Lt. William Petty, 33, of New Orleans, La., said the program has doubled in size since last summer in an effort to convert Hohenfels sites from replicas of communities in the Balkans to simulations of towns and cities in Iraq and Afghanistan.

&#8220;A lot of the soldiers (from the Reserve units) have been to Iraq or Afghanistan and they are using their experiences to make an authentic training facility,&#8221; he said.

Two units working at Hohenfels this month, the 225th Engineer Group (Louisiana) and 223rd Engineer Battalion (Mississippi), served in Afghanistan and Iraq, respectively, and both recently finished six-month tours to New Orleans in the wake of Hurricane Katrina, Petty said.

First Lt. Timothy Welborn, 31, of Baton Rouge, La., was helping build a large concrete building and courtyard at Hohenfels on Tuesday with 45 soldiers from the 769th Engineer Battalion out of Baton Rouge.

&#8220;We want it to look like it is in Afghanistan. We are trying to build it to Afghan standards,&#8221; Welborn said, pointing out an intentionally uneven outside wall.

The three-week trip to Germany helped the unit practice deploying and carrying out projects overseas, but it was also a reward for soldiers who performed well during the Katrina mission, which finished in February, said Welborn, a mechanical engineer from Louisiana State University.

First Sgt. Timothy Plunk, 43, of Clarksdale, Miss., said he served in Tikrit from 2003 to 2004 with the 223rd and post-hurricane New Orleans looked worse than Tikrit. The worst part of the Katrina mission was picking up bodies, he said.