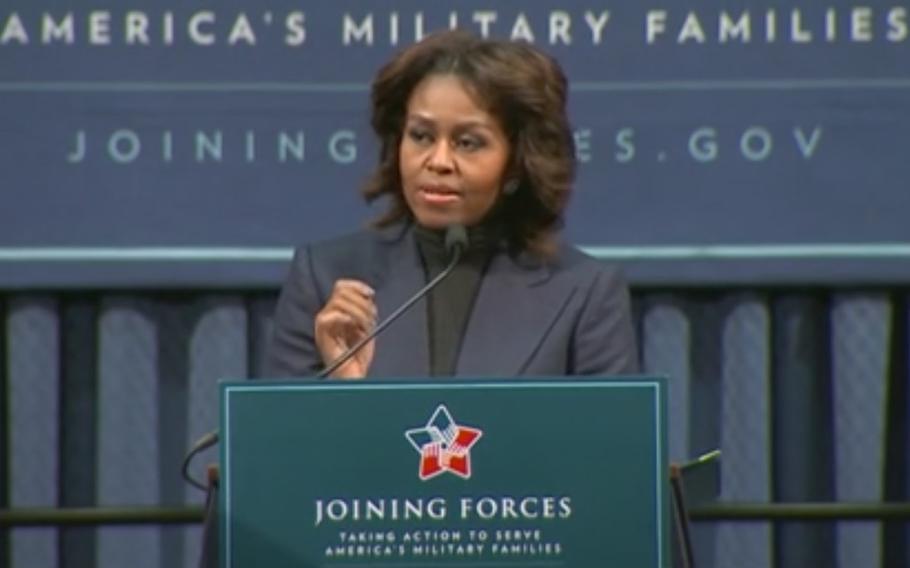 First Lady Michelle Obama announces a pledge by some of the biggest names in the construction industry to hire 100,000 veterans over the next five years. (DVIDS)

WASHINGTON — First Lady Michelle Obama announced Monday that a coalition of construction companies and associations has pledged to hire more than 100,000 veterans over the next five years.

“I know that you all have made this commitment not just because it is the patriotic thing to do, which it is. You’ve done this because you know that it is the smart thing to do for your businesses, because you know that America’s military turns out some of the highest skilled, hardest working employees this country has ever seen. And that’s particularly true when it comes to the construction sector,” Obama told industry representatives at a symposium at the Labor Department.

Companies making the pledges run the spectrum from large national firms like Jacobs and Bechtel to regional and local firms. Associations like the National Center for Construction Education and Research, the Home Builders Institute, The Associated General Contractors of America, and the Building Trades Association are also supporting the effort. More than 100 companies and other organizations are involved in the initiative, according to the first lady.

“Many of the skills and abilities gained during military training and service are highly transferable to the skills we require to successfully serve our clients around the world,” said Lori Sundberg, the senior vice president of human resources at Jacobs. “We are proud of the veterans working at Jacobs and appreciate their military service, their dedication, and the value they add to our company.”

The construction industry is expected to boom in the coming years. The Department of Labor estimates that more than 1.5 million construction jobs will be created between now and 2022.

The hiring push was spearheaded by the Labor Department and Joining Forces, a White House initiative promoted by Obama and Jill Biden to encourage organizations to hire and train veterans.