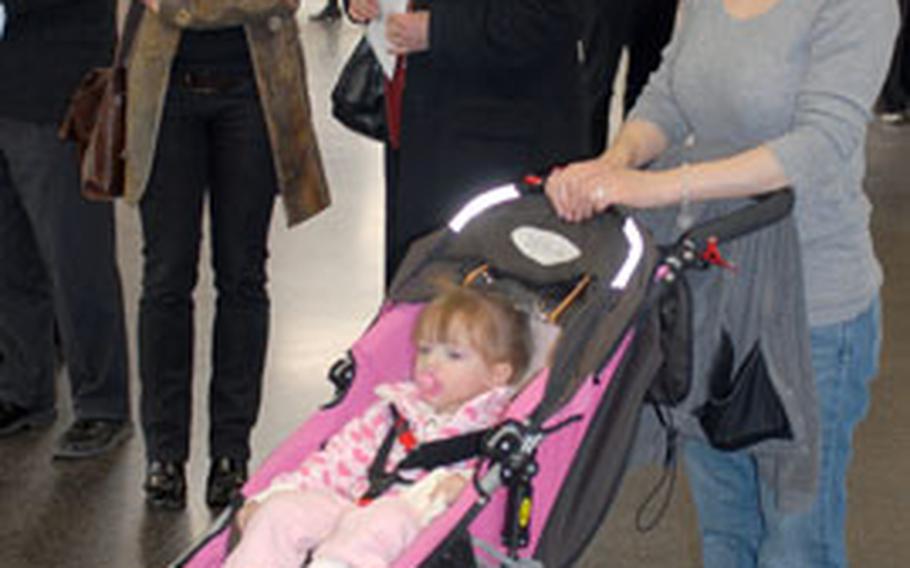 Officials cut a ribbon Wednesday marking the handover of the new facilities to Morale, Welfare and Recreation, which plans to open them in June once they&#8217;ve been furnished and staffed.

Army chief of engineers Lt. Gen. Robert Van Antwerp, who spoke at the ceremony, described the new facilities as awesome.

The new facilities are part of a $1 billion construction project that will see the Grafenw&#246;hr military community expand from a 1,000-soldier garrison with 2,000 military family members a few years ago to a brigade-size community with 4,500 active-duty soldiers and 7,000 family members by the end of the summer.

Another to attend the handover was 2nd Stryker Cavalry Regiment Danielle Koehn, who brought along her 22-month-old daughter, Savannah.

Koehn, who moved to Netzaberg in September, said she expects Savannah to be a regular at the CDC.

&#8220;Right now we use the CDC in Grafenw&#246;hr (on the Main Post) but it is a little crowded,&#8221; she said, as she waited to walk through the youth center, which features a large foyer, several rooms for activities and outdoor skateboard ramps.

Savannah will go to the CDC while her mother runs errands, goes to the gym or has her hair done, Koehn said.

Col. Margaret Burcham, commander of the European District of the Corps of Engineers, said the new facilities show the Army is taking care of families, many of whom have deployed soldiers.

The new buildings meet stringent safety standards and are right next to new middle and elementary schools due to open this summer, she said.

Grafenw&#246;hr Child and Youth services director Anita Payne-Landgraf said the youth center is for children in grades six to 12. It will replace the Grafenw&#246;hr Teen Center and offer youths after-school programs and recreational activities, she said.

&#8220;The CDC is a child-care facility for working parents so they can bring their kids during work hours. We have part day pre-school programs and kindergarten readiness programs,&#8221; she said.