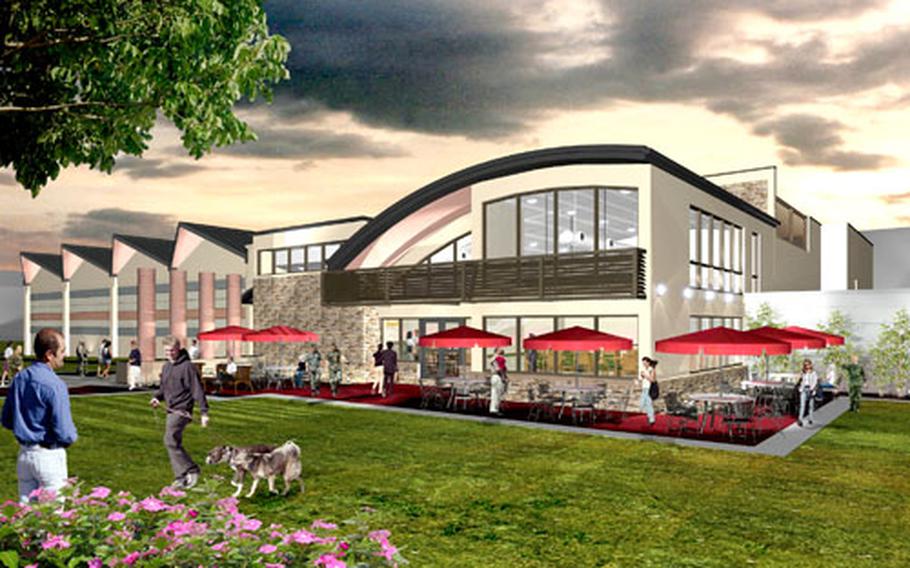 An artist’s depiction shows a 12-lane bowling center under construction at Camp Carroll in Waegwan, South Korea. The center is to open in June 2007. (Courtesy of U.S. Army)

PYEONGTAEK, South Korea &#8212; Workers at Camp Carroll in Waegwan have begun building a 12-lane bowling center that will include a sit-down restaurant that can seat 70 to 100 or more.

The bowling center is set to open in June 2007, part of a $10.1 million project that will also see construction of a new swimming pool and renovation of an athletic field. The pool is due for completion in May 2007.

An existing bowling center, which has only four lanes, eventually will be converted to some other recreation-related use, said Kevin Jackson, chief spokesman for the Army&#8217;s Area IV Support Activity in Daegu.

Under consideration are making it a sports equipment rental outlet or turning it into a shop where soldiers can bring their digital photos and have them framed and mounted, Jackson said

The restaurant would serve lunch and dinner and seat about 68 diners, but could seat just over 100 for banquets, said Glen Groome, Camp Carroll&#8217;s community activity center director.

Plans also call for the restaurant to have a takeout window, a bar, outdoor seating and two game machine rooms &#8212; one designated smoking, the other nonsmoking, and each with a slot machine, Groome said.

The projected cost of the bowling center-restaurant is $5.2 million.

The new swimming complex will have six 25-meter lanes, a bathhouse, slide, sand volleyball court and picnic area. The pool&#8217;s depth will range from 3.5 feet to 12 feet. And for children there will be an enclosed &#8220;splash pad&#8221; area with nozzles that spray water.

The pool complex is to cost $2.2 million.

&#8220;They&#8217;re installing the turf to get better use of the field, because when it rains it gets very muddy on the field and it can be difficult at times to play,&#8221; Jackson said. &#8220;And with synthetic turf, that is something that will drain more easily and will allow them to make better use of the facility.&#8221;

The field project is set for completion in the spring of 2007 and will cost about $2.7 million.

&#8220;Collectively, all of these projects are going to make Camp Carroll one of the great places to serve in the Republic of Korea in the future,&#8221; Jackson said.

The Samkye Construction Company Ltd. is carrying out the work under contract with the U.S. Army Corps of Engineers.