Construction begins at Ramstein on biggest DODEA school in Germany 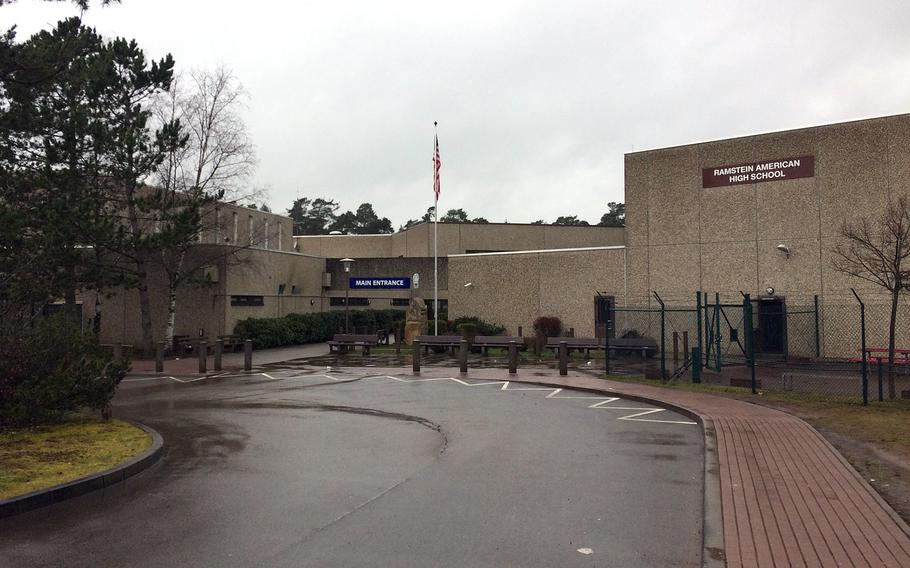 Buy Photo
Ramstein High School near Kaiserslautern, Germany, pictured March 28, 2018, will be replaced with a new school that's scheduled to open in the fall of 2021. The old school first opened in 1982. (Jennifer H. Svan/Stars and Stripes)

Buy Photo
Ramstein High School near Kaiserslautern, Germany, pictured March 28, 2018, will be replaced with a new school that's scheduled to open in the fall of 2021. The old school first opened in 1982. (Jennifer H. Svan/Stars and Stripes) Buy Photo
An architectural rending of the new Ramstein High School in Germany, as seen on March 28, 2018. In the background, construction crews have already started to dig up the ground where the new school will be built. (Jennifer H. Svan/Stars and Stripes) 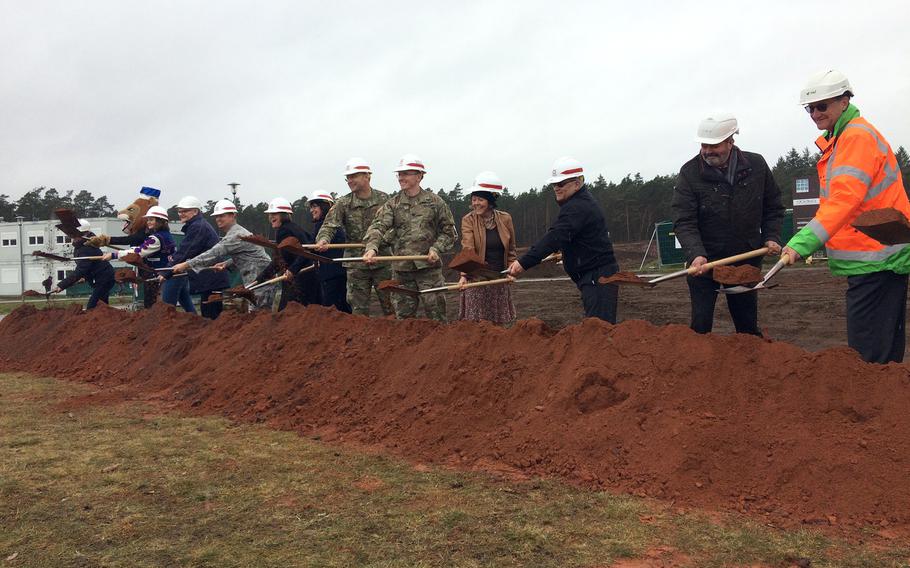 Buy Photo
U.S. military, school and German construction officials shovel a pile of dirt on March 28, 2018, to symbolically mark the start of construction on a new Ramstein High School near Kaiserslautern, Germany. The school is scheduled to be ready for students and teachers by fall of 2021. (Jennifer H. Svan/Stars and Stripes)

RAMSTEIN AIR BASE, Germany — Construction on the biggest and most expensive U.S. military school in Germany is underway here.

While a steady rain fell outside, Ramstein High School students, teachers and U.S. and German officials with a stake in the project marked the occasion indoors at a ground-breaking ceremony Wednesday for the new Ramstein High.

“We’re at the beginning of an exciting continuation of our march into the future,” said Ramstein principal Sharon O’Donnell. “The benefits for our students will be unlimited.”

Those benefits will be reaped by a future generation of students to come.

The new high school is scheduled to open in the fall of 2021, which means this year’s 8th-graders will be the first class to attend and graduate from the new school.

It is being built adjacent to the current school campus. Much of the earth where the foundation will go has already been dug up. Students will continue to use the old building until it’s torn down during the last phase of construction. Officials said the goal is as little disruption as possible to students and teachers.

With a budget of $98.8 million and a capacity for 1,100 students, the new Ramstein High will be the largest Department of Defense Education Activity school in Germany, said Michael Voich, a program manager for the U.S. Army Corps of Engineers Europe District.

The Corps is partnering with DODEA and the German government construction management agency Landesbetrieb LBB, which has the lead on the school design and construction.

The three-story school conforms to “21st-century” design principles. Instead of classrooms, the school features “learning neighborhoods” that can be adjusted for different group sizes and purposes. The school will also include a computing center, music rooms, an art room with kiln, science labs, and career technical education and shared common spaces.

Ramstein High is one of 19 DODEA school projects either in the design stage or under construction in Germany, with a combined budget of more than a billion dollars, Voich said. Most are in the Kaiserslautern and Spangdahlem military communities. Set to open this fall are the new Kaiserslautern High School and Wiesbaden Middle School.

DODEA is replacing or upgrading a majority of its schools worldwide after decades of neglect and deferred maintenance. A report that DODEA submitted to Congress in 2008 on the condition of its schools triggered the current boom in school construction. In many communities, DODEA determined it would be more cost-effective to build a new school than to repair old buildings.

While leaving school Wednesday, Ramstein sophomore Sam Williams said the current school was functional but he’s noticed “the walls are kind of crusty.

“Not like black mold, just a little bit; it’s not bad,” he said. “It’s really nice to get a new school.”

But senior Cedes Oswald said she was sad to see the current school go away.

“I’ve been in this high school since freshman year,” she said. “This is all home, so to see it being torn down, is kind of upsetting to me.”

But based on the drawing of the new school, posted at the construction site, “it looks like it’s going to be pretty cool,” she said.