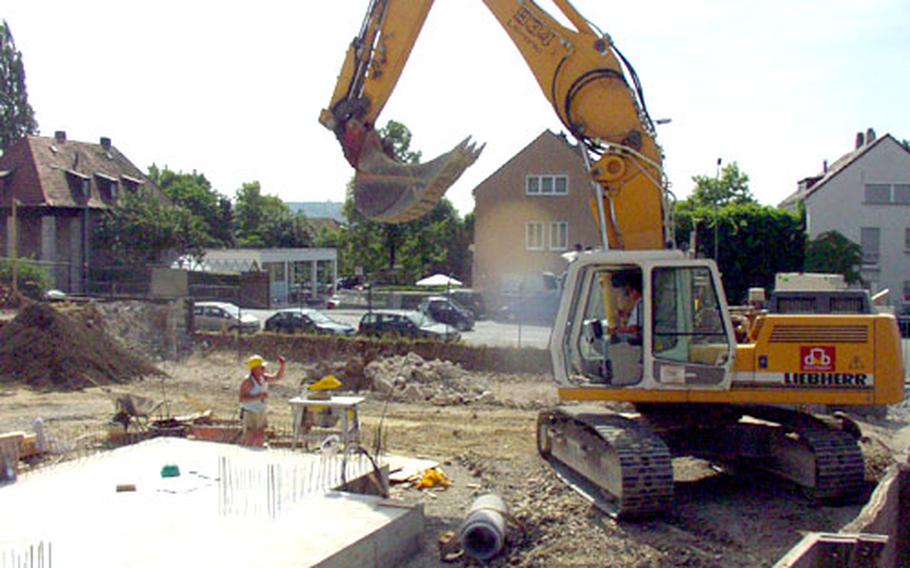 Workers have begun a $2.2 million project to upgrade security gates at the Würzburg Army Hospital, Germany. The construction work has eliminated 15 percent of the hospital’s parking and made an already tight parking situation worse. (Steve Liewer / S&S)

W&#252;RZBURG, Germany &#8212; The Army is spending $2.2 million to boost security at the W&#252;rzburg Army Hospital, but the work has worsened an already bad parking crunch.

Construction started last month at the hospital near Leighton Barracks, headquarters of the 1st Infantry Division. Once the project is completed next spring, the hospital&#8217;s southwest gate will have a two-lane entrance with a permanent guard shack and a truck turnaround, said Kurt Friederich, the hospital facility manager.

A widened access road around the building&#8217;s east side will connect to a renovated gate near the hospital&#8217;s emergency room. Pop-up bollards embedded in the pavement will allow guards to stop cars or trucks from racing through the gates.

The project is similar to the gate upgrades that have taken place at many U.S. military bases since the Sept. 11, 2001, terror attacks, Friederich said, and will bring the hospital up to U.S. Army Europe standards.

But the construction has meant headaches for the hospital&#8217;s patients and the soldiers from the 67th Combat Support Hospital who staff the medical center. It has eaten up 56 of the facility&#8217;s 377 parking spaces.

Because of its urban setting, there is limited on-street parking outside the hospital&#8217;s perimeter fence. Hospital officials have set aside a parking lot outside the emergency room door for patients only &#8212; which means competition is keen among employees for the scarce remaining slots.

The penalties can be stiff for those who sneak into one of the hospital&#8217;s no-parking zones. Hospital spokeswoman Amy Stover said violators may be barred from using the lot for up to 90 days. About 200 people already have been cited, she said.

Hospital officials have urged workers to walk or ride bicycles to work. The W&#252;rzburg-based 98th Area Support Group has set up a shuttle service that runs from the hospital to Leighton Barracks every 20 minutes between 6:30 a.m. and 5:40 p.m. so that soldiers can park in the ample lot outside the base&#8217;s large post exchange.

Don Klinger, a 98th ASG spokesman, said about 40 people per day have been using the shuttle, and its ridership is reviewed periodically.

Shadowing the project is the uncertain future of the hospital itself. The Pentagon already has announced its intention to move the 1st Infantry Division to Fort Riley, Kan., and it is widely assumed all of the W&#252;rzburg-area bases will close.

But U.S. Army Europe has not yet announced a timetable for withdrawing troops or closing bases. Construction projects aimed at force-protection have gone forward.

Despite the short-term pain, Friederich said, the completed project at least will restore hospital parking to its pre-construction levels.