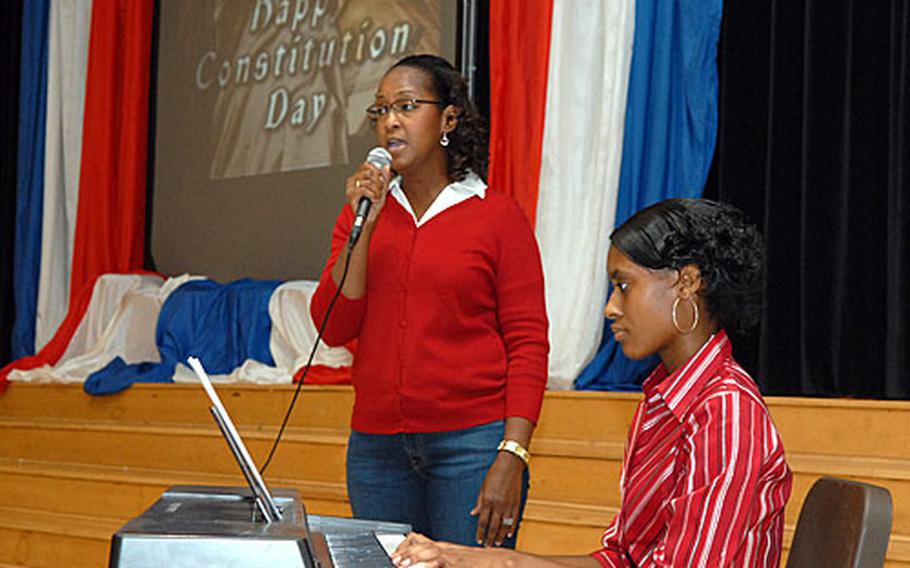 HANAU, Germany &#8212; Seventh-grader Ayla Blad knew how to draw attention to Old Glory, while Deja Griffin, her classmate, gave a banner answer to a question many students are wrestling with this week.

Standing next to her in the Hanau school gym, Ayla, with two small American flags pinned into her hair, creased her face in anguish for not having thought of the answer first.

In classrooms across Europe this week, the Department of Defense Dependents Schools is marking Constitution Day with a variety of activities. They range from a scavenger hunt at Aviano High School in Italy, to student elections at Schweinfurt Middle School in Germany, to skits at Lakenheath Elementary School in England.

This year Constitution Day fell on Monday. While some DODDS teachers spent part of the day discussing the document, others intend to incorporate it into their lesson plan this week.

Hanau Middle/High School commemorated the Constitution, adopted in 1787, with a school assembly. The band played a couple of songs, the Junior ROTC posted the colors and speakers spoke. One of them was retired Army Gen. Colin Powell, who, in a pretaped video, referred to the Constitution as a &#8220;beacon of light&#8221; for mankind.

Depending on the grade &#8212; Hanau is now a sixth- through 12th-grade school &#8212; students viewed the Constitution differently. Some knew just the basics, while others, such as Christopher Brown, the assembly emcee, grasped a bit more.

Afterwards, Christopher spoke of the &#8220;supremacy clause,&#8221; which establishes the Constitution as the guiding law of the land. It was his favorite, as well as the basic rights the Constitution safeguards.

Jeremiah Miller, an eighth-grader who was pleased to be missing math, wasn&#8217;t as fluent on the subject as Christopher, but he had his own take on the subject.

(Answers at end of quiz)

1. What year was the U.S. Constitution written?

2. Who was the president of the convention that wrote the Constitution?

3. How many pages are there to the original Constitution?

4. What was the population of the country when the Constitution was written?

5. How many amendments are there to the Constitution?

7. What Virginia delegate would not sign the Constitution because it had no bill of rights?

9. How many years must you have been a U.S. citizen to serve in the House of Representatives?

10. The Constitution created an army and a navy. In what year did Congress create the U.S. Air Force?

11. The only Constitutional amendment to be repealed dealt with what?

12. What is the significance of the 13th Amendment?

13. What U.S. president served more than two terms in office?