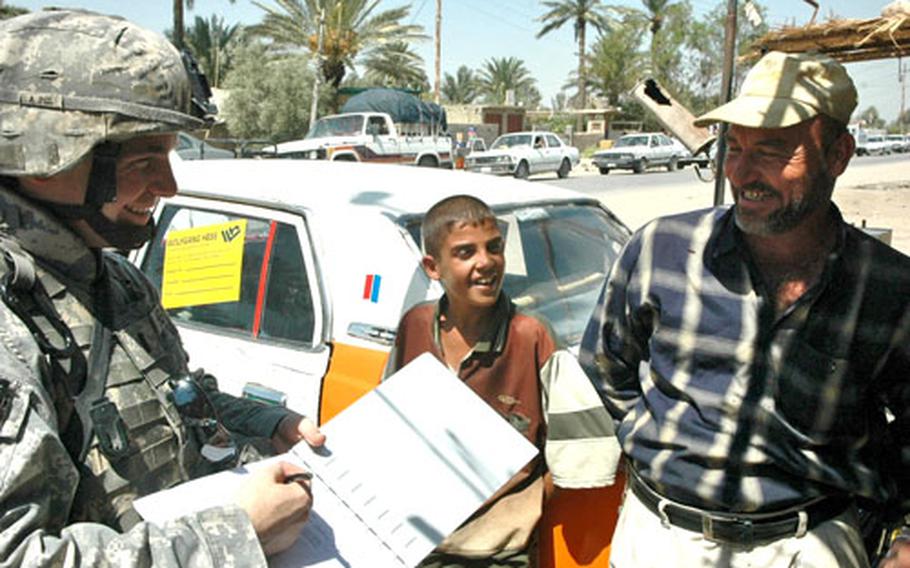 First Lt. Anthony Heisler surveys local residents in the Iraqi town of Hawr Rajab recently. Heisler’s “Buffalo Soldiers” squadron spent most of its deployment actively hunting down insurgents. And though the mission now is more directed at winning hearts and minds, soldiers remain on edge for the sound of a roadside bomb. (Monte Morin / S&S)

As Heisler and the crew of his gun truck cruised down a ragged country road just south of Baghdad, a triggerman lurking at the end of an electrical wire detonated an Italian-made landmine under Heisler&#8217;s Humvee.

A ball of flames erupted from the plastic mine and punched through the vehicle&#8217;s engine block, its dashboard and its armored firewall. At the same time, an invisible force body-slammed Heisler and his men.

But as the air cleared, Heisler noted that he was indeed alive and that his truck was thumping slowly and haphazardly off the road. He noted too that his driver was shouting in Spanish &#8212; which was weird &#8212; because the guy usually spoke English.

Heisler also noticed flames shooting up from the floorboards and realized that he and his men would be roasted alive unless they bailed.

While roadside bombs remain the top killer of U.S. troops in Iraq, soldiers in the famed 1st &#8212; or &#8220;Buffalo Soldiers&#8221; &#8212; Squadron of the 10th Cavalry Regiment, 2nd Brigade, 4th Infantry Division are coping with a particularly virulent strain of IED angst.

After spending their first six months of deployment in the relatively quiet environs of Hilla, the Buffalo Soldiers relocated to the heavily Sunni territories immediately south of Baghdad.

The area, which commanders describe as a former safe haven for key insurgent planners and suppliers, saw little U.S. military presence prior to the squadron&#8217;s arrival; the enemy&#8217;s response was swift and violent.

Love said that since the squadron has relocated to its new area of operations, soldiers have been increasingly successful in locating the bombs before they explode. So far, troops have found and destroyed 111 roadside bombs before they were triggered, whereas 87 of the devices have exploded.

Many squadron soldiers have either survived or witnessed multiple attacks and the legacy of these experiences is just now dawning on them.

In one such episode, a beloved sergeant in Heisler&#8217;s troop was killed when he stepped on a buried artillery shell.

Few soldiers in Iraq are strangers to the gut churning anxiety that accompanies a drive &#8220;outside the wire,&#8221; down hostile streets or country roads.

However, the overwhelming prevalence of roadside bombs in areas like the town of Hawr Rajab has forced troops to cope with extraordinary levels of stress.

In the wake of such attacks, some soldiers say they dread looking at other vehicles ahead or behind them in convoys. They&#8217;re worried that their friends&#8217; gun truck will suddenly disappear in a cloud of filthy smoke.

After returning from leave recently, Heisler said he stepped on a roadside bomb his first day out in Hawr Rajab. Fortunately for the officer, the cordless telephone base station that served as a trigger had been crushed by a vehicle before an insurgent could detonate the bomb.

While Heisler was relieved the device was inoperable, the episode did little to ease his mind.

Attacks in the squadron&#8217;s area of operation actually have fallen significantly since June.

Love said that as a result, the squadron has been able to switch from combat operations to civil engagement exercises. The goal, he said, is to persuade the vast majority of ambivalent or apathetic Iraqis in his area of operations to not lend active or passive support to the insurgents.

Heisler recently returned to Hawr Rajab to survey local residents and to hand out toys.