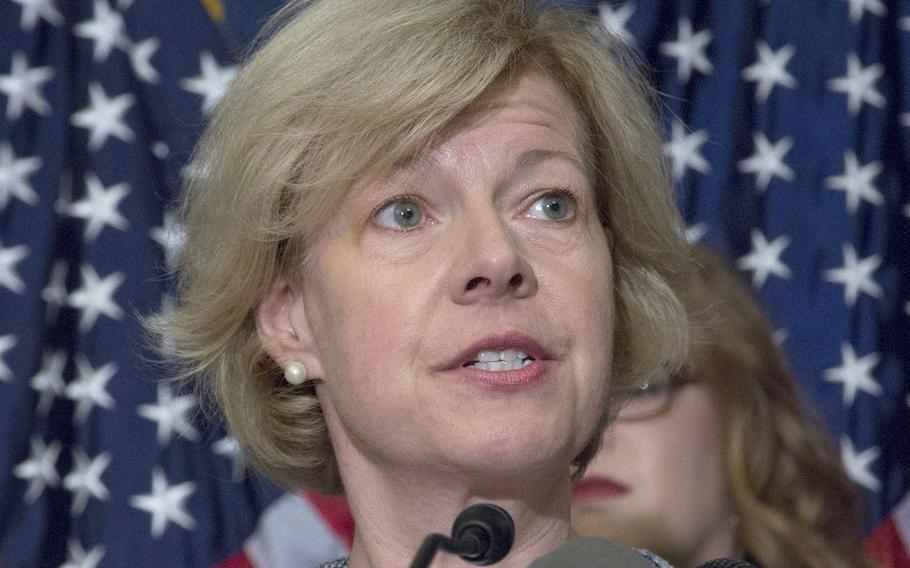 Sen. Tammy Baldwin, D-Wis., seen here at a 2015 press conference, is the target of an advertising campaign initiated by Concerned Veterans for America. (Stars and Stripes)

WASHINGTON – Concerned Veterans for America, which is part of the Koch conservative political network, initiated a $1.5 million advertisement campaign Tuesday criticizing Sen. Tammy Baldwin, D-Wisc., for her record on veterans issues. It’s the first significant step in the group’s multimillion-dollar strategy targeting states where Republicans will challenge Democratic incumbents in the 2018 mid-term elections.

The 30-second ad will run online and on television in Wisconsin for three weeks. It criticizes Baldwin for how she handled the 2015 scandal at the Department of Veterans Affairs hospital in Tomah, Wisc., where medical providers were found to be over-prescribing opioids. An inspector general’s report faulted the hospital for the accidental overdose death of a Marine Corps veteran.

The ad ends by advising watchers to “tell Tammy Baldwin to fight for our veterans” and support the Veterans Community Care and Access Act, a bill introduced by Sens. Jerry Moran, R-Kan., and John McCain, R-Ariz., that aims to increase options for veterans’ health care outside the VA. The bill has sparked disagreement among the Senate Veterans’ Affairs Committee.

“The main purpose of these ads, as it was in the past, is to highlight the fact that there are still problems at the VA and secondarily, that there’s been specific politicians who have failed to do the right thing,” said Dan Caldwell, executive director of Concerned Veterans for America. “Like this specific ad highlighting Tammy Baldwin, we ask that people contact these members who haven’t done the right thing and tell them to support policies that will fix long-term, systemic problems in the VA.”

Officials with the Koch network told reporters last month at a summit in California that they plan to spend about $400 million leading up to November’s mid-term elections. Baldwin is a primary target of billionaires Charles and David Koch.

Last October, Koch affiliates purchased ads criticizing Baldwin’s position on tax reform. The Center for Responsive Politics, a nonprofit, nonpartisan research group, wrote in November that, at that time, $3.1 billion in outside spending had been directed against Baldwin, an amount far exceeding spending against the 21 other Democratic senators up for re-election in 2018.

As an issue-advocacy organization, CVA can’t campaign for or against any particular candidate, but it can promote legislation and criticize politicians on their positions.

Besides Wisconsin, CVA will focus its efforts on Montana and Ohio, Caldwell said. Democratic Sens. Jon Tester of Montana and Sherrod Brown of Ohio are up for re-election in November. They’re members of the Senate Veterans’ Affairs Committee.

CVA hired a statewide director in Wisconsin late last year to drum up local support. The group has also established statewide staff in Ohio, where CVA is criticizing Brown for attempts to “water down” legislation that speeds up the firing process for VA employees, Caldwell said.

“We look at this like, ‘Where’s the best opportunity to highlight our policy priorities?’” he said. “With that in mind, we’re looking at Montana and Ohio right now, and other states later in the year as well.”

CVA is working with Americans for Prosperity, another organization in the Koch network, to highlight veterans’ issues. The group’s goal, Caldwell said, is to advance legislation that gives veterans more choice in their health care – a key campaign promise of President Donald Trump. After about a year of negotiations, legislation has stalled in Congress to overhaul the VA Choice program, which allows some veterans to receive medical care in the private sector.

The group has gained more influence under the Trump administration. Trump has placed one of CVA’s senior advisers at the Department of Veterans Affairs. CVA is also invited to take part in discussions, along with congressionally chartered veterans service organizations, when White House and VA officials talk about veterans’ issues.

Caldwell credited his group for the passage of the VA Accountability and Whistleblower Protection Act – a bill Trump recently heralded in his State of the Union speech.

Baldwin, CVA's latest target, was one of 31 co-sponsors of the accountability bill. But CVA pointed to its efforts during the 2014 elections as a reason the bill passed. That year, CVA ran ads in Iowa and North Carolina, where Republican Sens. Joni Ernst and Thom Tillis won hard-fought races.

“I can confidently say that these ads have been instrumental in helping advance our policy priorities on Capitol Hill,” Caldwell said. “I don’t think the VA Accountability Act would’ve passed last year had we not highlighted politicians in 2014 and 2016 who were on the right side and the wrong side of this issue.”

Caldwell thinks veterans issues have the potential to resonate again in 2018.

“The military is one of the most-respected institutions in the country, and veterans are some of the most-respected people in their communities,” he said. “When people see veterans aren’t being treated well, they get angry. When they see politicians are not living up to their promises to take care of our veterans, then they’re likely to hold those politicians accountable.”