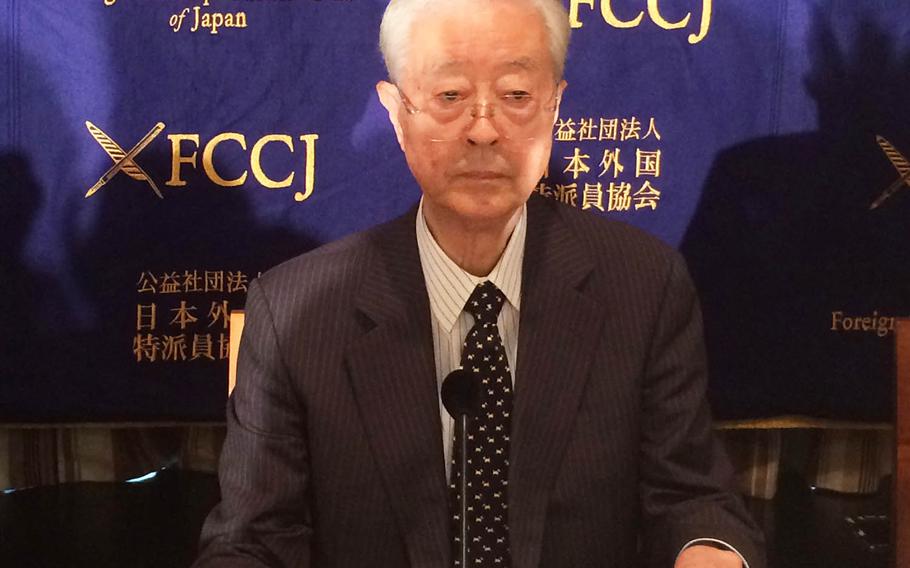 Buy Photo
Tadae Takubo, chairman of conservative lobby group Nippon Kaigi, or "Japan Conference," speaks at the Foreign Correspondents' Club of Japan in Tokyo on Wednesday, July 13, 2016. The group, seldom mentioned in the press and not widely known outside Japan, wants to revise the nation's post-war constitution, restore traditional values, promote emperor worship and put the state before individuals. (Seth Robson/Stars and Stripes)

YOKOTA AIR BASE, Japan — The growing influence of conservative lobby group Nippon Kaigi in Japan largely dovetails with the U.S. desire for the Asian country to expand its role in regional security, but worries opponents who fear a return to pre-World War II values.

The group, seldom mentioned in the media and not widely known outside Japan, wants to revise the nation’s post-war constitution, restore traditional values, promote worship of the emperor and put the state before individuals.

Nippon Kaigi, which means “Japan Conference,” can mobilize voters in large numbers and has a star-studded membership that includes some of the nation’s most powerful business and political leaders, Kingston said. Prime Minister Shinzo Abe is a member, as are four out of five of his cabinet ministers and 40 percent of the representatives in the Diet, Japan’s parliament.

The 40,000-member organization was formed in 1997 out of displeasure at Japanese leaders’ embrace of a “masochistic” history of the country as laid down by victorious Western nations after the war, Kingston said.

Abe’s gains in this month’s upper house election gained his Liberal Democratic Party and its coalition partners a two-thirds majority in both Diet houses. Any constitutional amendment requires two-thirds approval in both houses and must then pass by a majority in a voter referendum.

The LDP ran primarily on economic issues and made little mention of constitutional issues. However, constitutional review has long been a goal both for both Abe and Nippon Kaigi.

Nippon Kaigi views the constitution “as something written from the outside with western DNA,” Kingston said. “They don’t like the emphasis on human rights and liberties and think there should be more emphasis on tradition and duties.”

Nippon Kaigi is the right wing of the LDP, which the U.S. has long embraced as its conservative partner in Japan. But some of the group’s positions are awkward for the U.S. because they upset Japan’s neighbors, Kingston said.

“The only thing wrong about the Pacific war, they think, was losing it,” he said.

Members regard Japan’s Class A war criminals, such as executed wartime Prime Minister Hideki Tojo, as martyrs, and many didn’t approve of rapprochement between Japan and South Korea over the issue of comfort women last year, he said. Comfort women were forced into sexual slavery for Japanese troops during World War II.

Nippon Kaigi chairman Tadae Takubo, a former journalist who worked in Washington, D.C., told the Foreign Correspondents’ Club of Japan last week that his group has been unfairly labeled extreme and that its members want a civilian-controlled military with the same status as armies in other countries.

“Japan is moving from the extreme left to the center,” he said.

During the 1991 Gulf War, for example, Japan didn’t send military forces. The country contributed billions of dollars to the war effort but wasn’t mentioned in an advertisement the Kuwaiti government placed in the Washington Post to thank 30 countries that did send forces, he said.

“The state is based on the economy, politics and the military, but in Japan the military is not in the situation of a normal country,” he said.

Japan’s lack of a normal military means it can’t adequately respond to Chinese expansionism, he said.

At the same time, some U.S. presidential candidates have said America should limit its external commitments, he said.

Nippon Kaigi is pushing for revisions to the constitution to allow for a more active military. Those calling for protection of the Japan’s constitution in its current form are saying the same thing as China, Takubo said.

Article 9 of Japan’s constitution renounces war as a means of settling international disputes and forbids a standing army, although Japan’s Self-Defense Forces work closely with their U.S. counterparts.

“They want to get rid of article 9 because they think it emasculates Japan and makes it a client of the U.S.,” Kingston said of Nippon Kaigi.

Despite Abe’s supermajority, he could still face a difficulty pursuing changes to the constitution, which has never been amended since being passed during the U.S. post-WWII occupation in 1947. Leaders from Komeito, a Buddhist-oriented party and the LDP’s junior coalition partner, support some reform but recently expressed opposition to changing Article 9, according to Japanese broadcaster NHK in July.

Nor is popular support a given for any changes to Article 9, which supporters credit for keeping Japan out of war for decades.

A Jiji news agency exit poll in July found only 30 percent voicing support for any constitutional change, though 34 percent said they remained unsure.

Abe’s administration passed laws last year allowing Japan to defend its close allies in combat for the first time — a smaller measure in comparison — but only over protests by tens of thousands of Japanese outside the Diet, along with polls showing majority opposition.

Strengthening the nation’s own defense options has long been Abe’s declared goal, but he and Nippon Kaigi also favor close ties with the U.S. military.

“We need to strengthen the U.S.-Japan alliance,” Takubo said. “Without this we won’t be able to survive.”

President Barrack Obama’s recent visit to Hiroshima with Abe was significant, he said.

“These two intelligent politicians may have different views of history, but they are saying let bygones be bygones and establish a new U.S.-Japan relationship,” he said.