Connors: Nowhere over the hill Jimmy Connors lunges for the ball during his match against Bjorn Borg in the 1983 Suntor Cup tennis tournament at Tokyo. (Ken George/Stars and Stripes)

Jimmy Connors lunges for the ball during his match against Bjorn Borg in the 1983 Suntor Cup tennis tournament at Tokyo. (Ken George/Stars and Stripes) 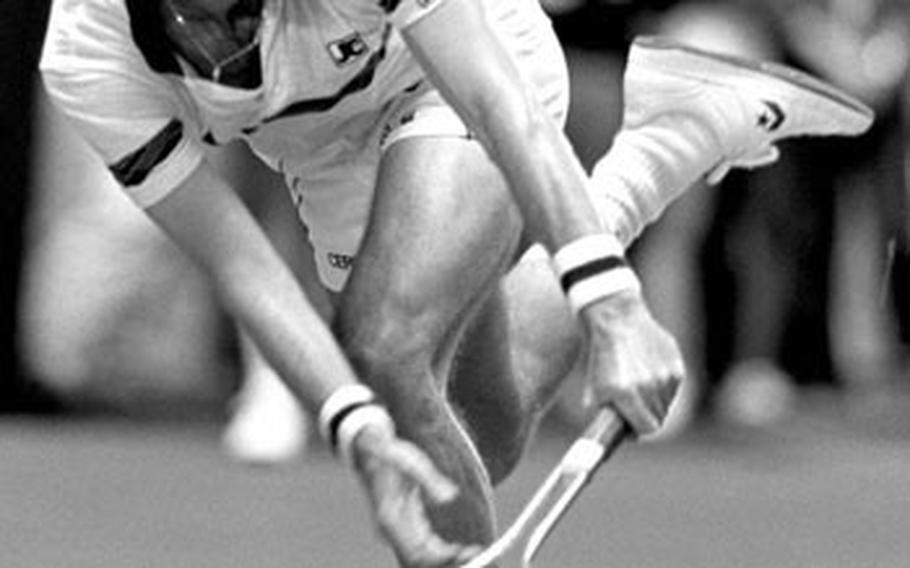 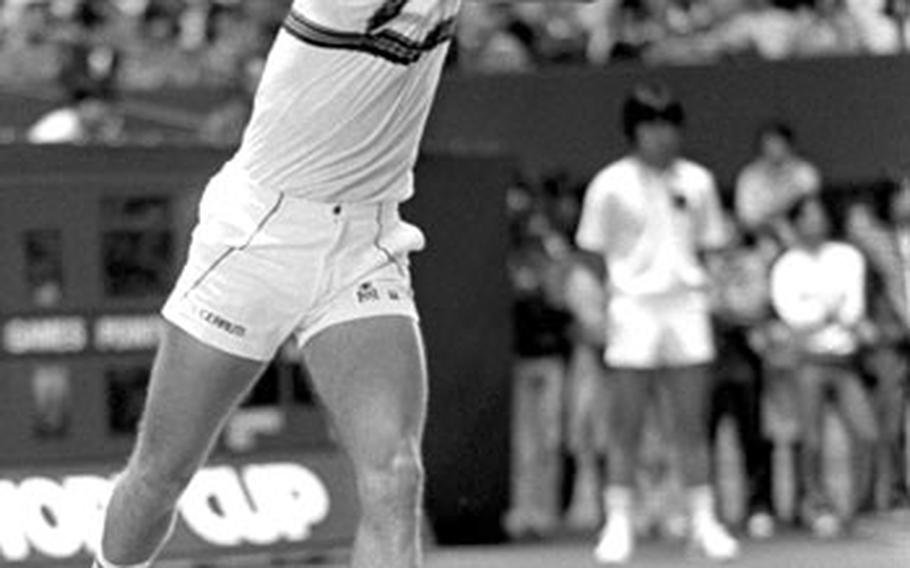 Connors goes airborne on a return. (Ken George/Stars and Stripes) 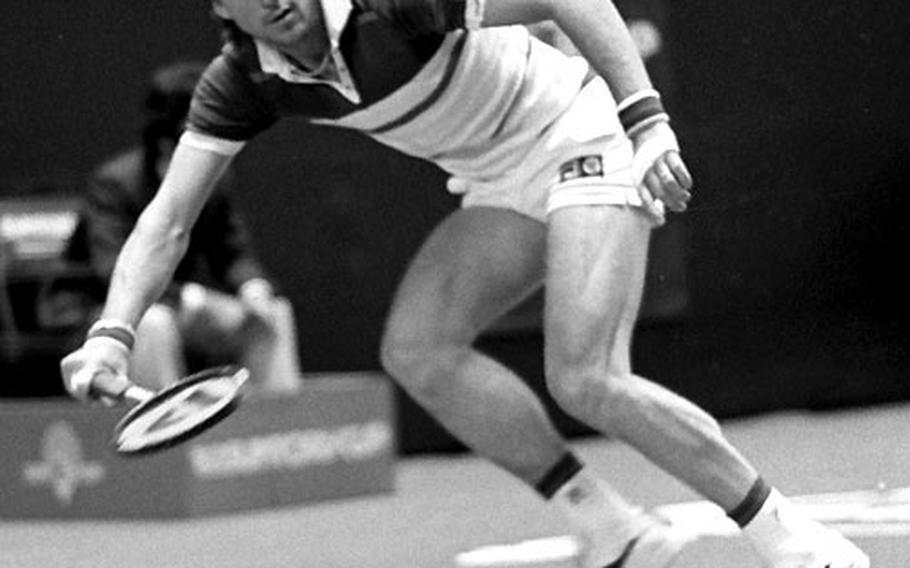 Bjorn Borg takes on Jimmy Connors in what was billed as his final match before retiring from tennis. (Ken George/Stars and Stripes)

TOKYO — See Jimmy practice. A slicing forehand down the ad court, a fierce backhand down the straight, a beautiful volley right smack into the net.

"You -----," he says to himself, hits a ball into the stands, then sticks the end of his tennis racket down the front of his sweat pants and struts around.

See Jimmy at the press conference.

"I'd like to thank you all for coming here today," he tells nearly 300 reporters and photographers covering the Suntory Cup tournament. "We have a lot of questions we want to ask you, so let's get started."

"Mr. Connors--," the interpreter begins. "Don't bother us; we're talking," he says, then finishes his conversation with John McEnroe, who's sitting next to him.

"Mr. Connors--" she tries again, "He wants to know how you are playing."

"Fine; thank you. Next question."

See Jimmy play — press conferences and practices are one thing, but playing is another. And oh, how he can play — last year in Monterey, Calif., Los Angeles, Las Vegas, Columbus, Ohio, the grass courts of London and Wimbledon and. the hard courts of Flushing Meadow, N.Y., in the U.S. Open, and this year at the U.S. Indoor in Memphis and in exhibitions against Bjorn Borg all over the world.

They all add up to one thing — winning.

Ironically, the era could be the mid 70s — Connors' antics and his victories are almost the same. But this is 1983, Connors is 30 instead of 20, and although he has reached back in time to restore technique, he's wiser, more experienced and tournament tough. And this time, Connors swears he won't fall into the pit that enveloped him for three long years after he achieved such incredible success.

"I don't have time for another roller coaster ride," he says away from the cameras, lights and people demanding his attention. "I'm almost 31 — God, that's, horrible to admit — but I am, and I know I don't have time to do things half-assed. I did it half-assed a few years and I probably shouldn't have," he said, referring to the years that saw him shoved out of the tennis limelight; a player labeled former, a has-been, a wash-out.

The years between 1979 and 1981 were tough on Connors. After sweeping three of the Big Four tournaments in 1974, and recording wins in the U.S. Open twice after, he failed to reach the final in 10 Grand Slam appearances. Even he began to think he was on his way out.

Last season, however, almost out of nowhere, Connors came back. Seven big tournament triumphs, including a magnificent win over McEnroe at Wimbledon in June and an incredible decision over Czechoslovakia's Ivan Lendl at the U.S. Open in August. Not since Bill Tilden won Wimbledon nine years after his last win has such a comeback been recorded.

Depending on what you read or who you talk to, Connors is ranked either No. 1 or No. 2 behind Lendl. "I don't know how anyone can be ranked No. 1 when they haven't won a major tournament," Connors says about Lendl. "Am I No. 1? You're not going to talk me out of it," he says.

It's a place he knows and one he wants to hang on to.

"It was important for me to win last year for my own personal satisfaction," Connors explained. "A lot of people didn't believe 1 could do it.

"I didn't have to win last year. That's why it was so much fun to try and do it. All my so-called friends who left me three years ago suddenly are back. If 1 don't do it again this year I suppose they'll write me off again," he said.

But Connors is not about to give them the chance. He's strong, healthy after a month off, and eager for a repeat performance. Ecstatic with last year, Connors said he would be satisfied this year for even half of 1982's finish.

"Are you kidding?" he said in disbelief. `I'd probably fly right out of here with half of last year. If I could choose, I'd pick the Open because it would give me the record that would be great," he said.

"I have the same determination, the same attitude as when I was 18 years old. You wake up a little more tired, a little stiffer, but its worth it and I don't mind it so much," he said.

Especially when he's also back in the top money, not that he needs it. Connors was the first player to hit the $4 million career earnings mark, not including the 20 times that in appearance fees and endorsements.

Connors is quick to note that money doesn't have much to do with his motivation any longer.

"Someone asked Borg what he has gained from tennis and the first thing that comes to mind, of course, is money. But after you win X amount of dollars, winning more doesn't have the same meaning. You stop winning for the money because you already have it. You win for yourself," he said.

"Jimmy was really down during those years when he wasn't winning," says McEnroe, who considers himself a good friend. "He's playing so well now and winning and that makes him seem like another whole person," he said.

Last year, Connors went back "and did everything that got me to the top 10 years ago. There was no pressure, because no one expected him to perform, and he was relaxed — something that never before had been linked with the hyperactive, fidgety player from Belleville, Ill.

His family — wife Patti, a former Playboy Playmate, and 3-year-old son Brett — are credited with the feat.

They brought him not only security and responsibility, but a renewed sense of priority. Suddenly, winning was no longer the only thing.

He took up golf. ("My handicap? My arms and my legs — don't print that") and started work on two tennis clubs in Miami. He lives in a condominium there, but wants a ranch back home in Illinois with horses and "lots of room for my boy.

"I spent 15 years trying to get out of Illinois, and now I'm dying to get back," he said. He's the proudest of fathers — even wears Brett's nickname "Tig" in big gold letters around his neck.

With other things in his life besides tennis, Connors found a new relationship with the sport that has given the other things to him.

"I enjoy it so much more now," he said. "1 don't like to travel so much anymore, but to go to new places I've never been is fun for me.

"As long as I wake up in the morning and enjoy playing and enjoy the practice and the travel, then I'll keep playing. I really do enjoy it too much to think about retiring now. Especially when I'm playing so well," he said.

"I don't have time to look back on my career. I'm still too busy doing it. History was then and now is now. The only good thing about history is they can't take it away from you," he said.

Connors says there's more pressure on him to play well now because of last year, but that kind of pressure he's used to — the kind that comes with being one of the best players in the world.

"The pressure comes from within, really. I always try to set my goals a little out of reach because I'm the kind of person who needs something to shoot for. But, there's nothing ever out of reach it you work hard for it," he said.

"Just because I'm 30 it doesn't mean I'm dead. If I was over the hill last year I want to be over the hill the rest of my life," he said.