Connecting with warriors past at Cambridge American Cemetery 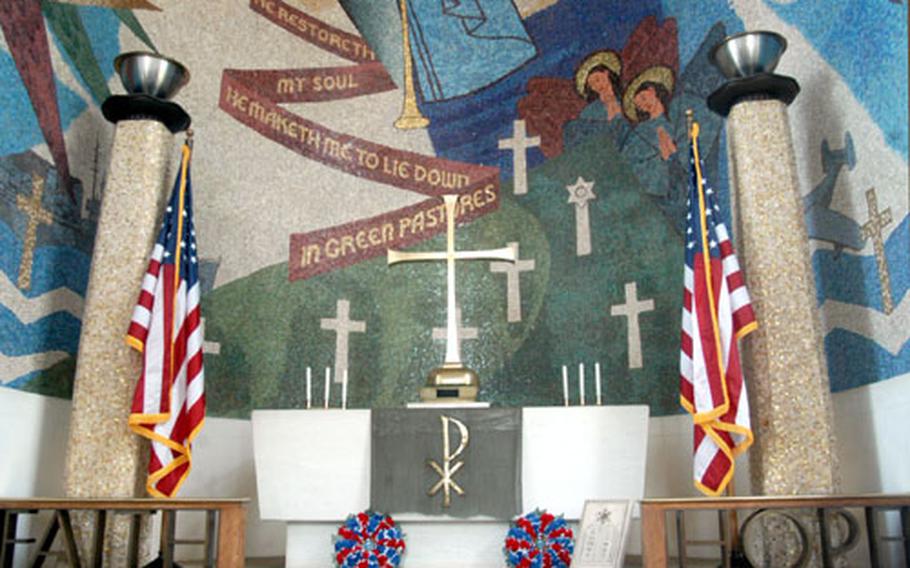 Visitors are welcome to pray at this chapel in the cemetery&#39;s memorial. (Sean Kimmons / S&S)

Visitors are welcome to pray at this chapel in the cemetery&#39;s memorial. (Sean Kimmons / S&S) 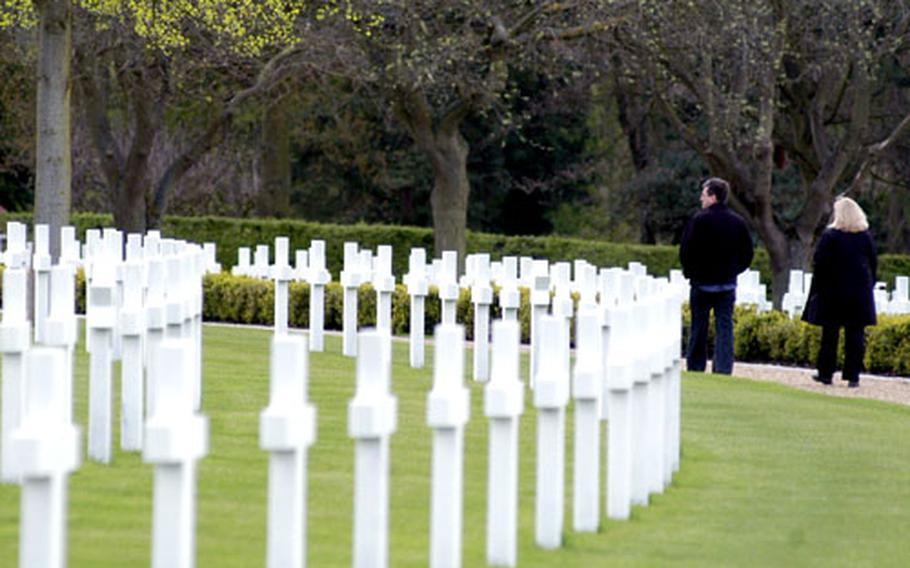 Visitors to the Cambridge American Cemetery and Memorial stroll past the rows of headstones. (Sean Kimmons / S&S) 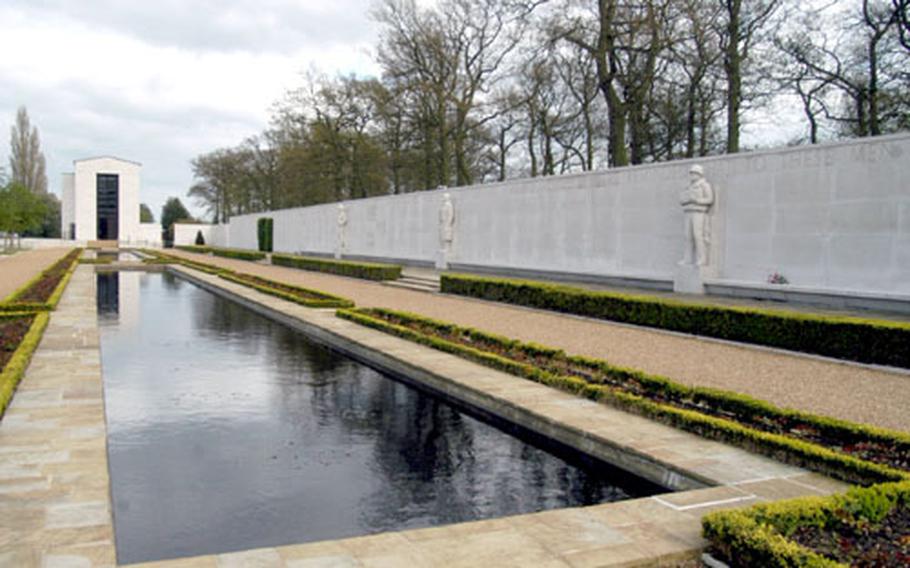 The wall on the right commemorates 5,126 Americans missing in action during World War II. It runs parallel to a pair of reflecting pools that lead into the cemetery&#39;s memorial. (Sean Kimmons / S&S) 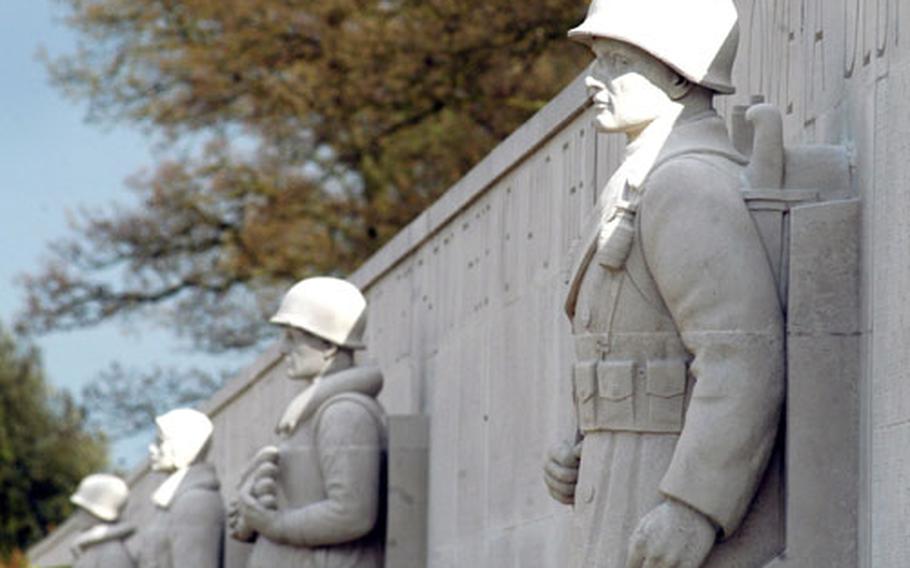 Statues representing each of the services guard a 472-foot-long wall of stone tablets bearing the names of 5,126 Americans missing in action during World War II. (Sean Kimmons / S&S) 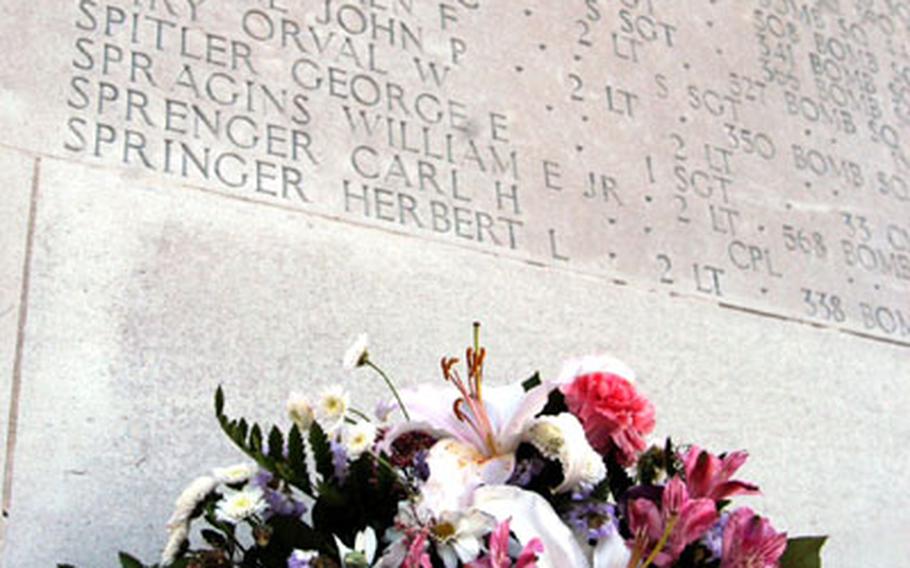 A bouquet is left at one of the stone tablets. (Sean Kimmons / S&S)

CAMBRIDGE &#8212; He may have died 62 years ago during World War II, but 2nd Lt. Owen B. Coffman has not been forgotten.

A bouquet of flowers recently lay in front of the headstone of the former Californian, who is buried at the Cambridge American Cemetery and Memorial.

Minutes outside of northwest Cambridge along Highway A-1303, the cemetery is the only one in the British Isles devoted to American veterans of World War II.

It is the final resting place for Coffman, who was attached to the 457th Bomb Group, and 3,811 other American men and women, mainly crew members of Britain-based American aircraft in the war.

Names on the headstones in the military cemetery include those who died in the invasions of North Africa and France, training areas in the United Kingdom or in the waters of the Atlantic.

Additionally, the names of 5,126 Americans missing in action are engraved on a 472-foot-long wall of stone tablets parallel to three reflecting pools. Statues of a soldier, a sailor, an airman and a Coast Guardsman stand at attention in front of the tablets.

The cemetery will hold a Memorial Day service at 11 a.m. The service will include U.S. airmen from local air bases.

On a recent afternoon, highway traffic hummed behind the tablets and several birds chirped in nearby trees. At the top of the hour, bells hidden in the memorial building rang out an eerie echo over the cemetery.

The sun beamed down on the rows of headstones and illuminated their backsides. Shadows danced back and forth as clouds floated into the sunlight. In the distance, fields of bright yellow rapeseed flowers contrasted with the white headstones made out of Italian lasa marble.

Despite traffic noise, the American cemetery is a place of solitude, reflection and remembrance of those who gave the ultimate sacrifice.

It&#8217;s easy for visitors to lose themselves in the somber place while walking past the headstones and reading their inscriptions:

The veterans memorialized here may have died more than 60 years ago, but with help from this cemetery, they will not be forgotten no matter how many years pass.

For more information ...The Cambridge American Cemetery and Memorial will hold a Memorial Day service at 11 a.m. The service will include U.S. airmen from local air bases.

The cemetery is open daily from 9 a.m. to 5 p.m., except on Christmas and New Year&#8217;s Day. A staff member in the visitors&#8217; building can answer questions and escort relatives to grave and memorial sites.