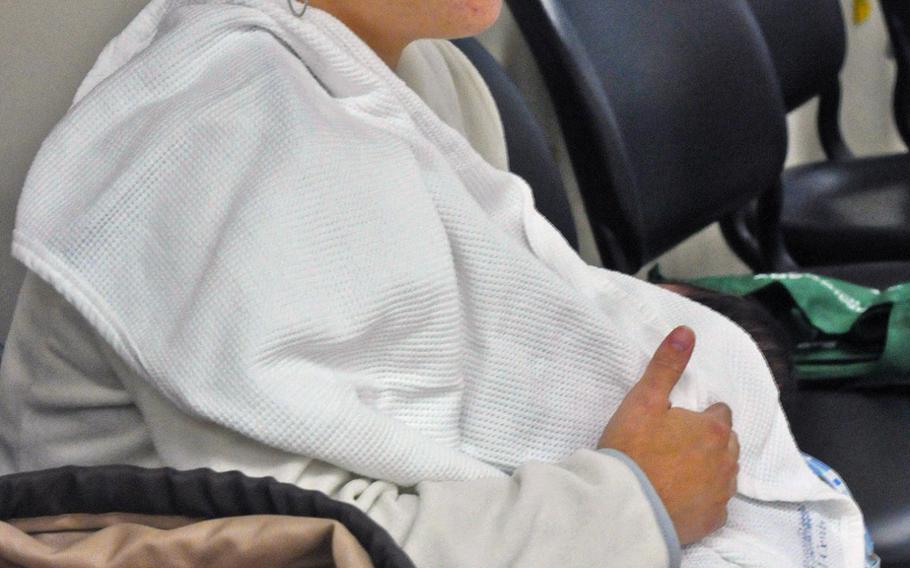 Sgt. Lizbeth Perez breastfeeds her 2-week-old daughter at Madigan Army Medical Center on Joint Base Lewis-McChord, Wash., in August 2011, during one of the hospital's Moms Own Milk group sessions. (Christopher M. Gaylord/U.S. Army)

The Army is reviewing how nursing mothers are treated and looking into best practices to devise a policy on breast-feeding, said Rep. Niki Tsongas, citing a letter from Army Chief of Staff Ray Odierno.

Tsongas, D-Mass., asked Odierno in a letter last month to create a policy that at the least designates a private, clean space with electrical outlets for pumps for expressing milk and that allows lactating women to take breaks. That comports with legislation included in the national defense bill recently passed by the House.

A news release on her website Tuesday said Odierno had responded this month, saying the Army would review its current practices and see what other services do.

“The Army is currently in the process of conducting a thorough review of this policy. We will work with the other services to understand best practices,” the release quoted Odierno’s letter as saying.

The Army, unlike the other services, does not have a standard policy to which breast-feeding mothers can refer.

The Air Force, Navy and Marines have policies protecting servicemembers’ right to breast-feed, either mandating or strongly encouraging commands to provide clean spaces — not restrooms — for pumping, and delaying deployments in the months after childbirth. The Army does not, though it does defer deployments postpartum.

According to Tsongas, the breast-feeding issue is part and parcel of the struggles of military women to gain equality. The congresswoman has also worked to get equipment like body armor sized for women, who make up 14 percent of Army soldiers.