Congressman wants to ban gambling machines on base, military says they aren’t a problem 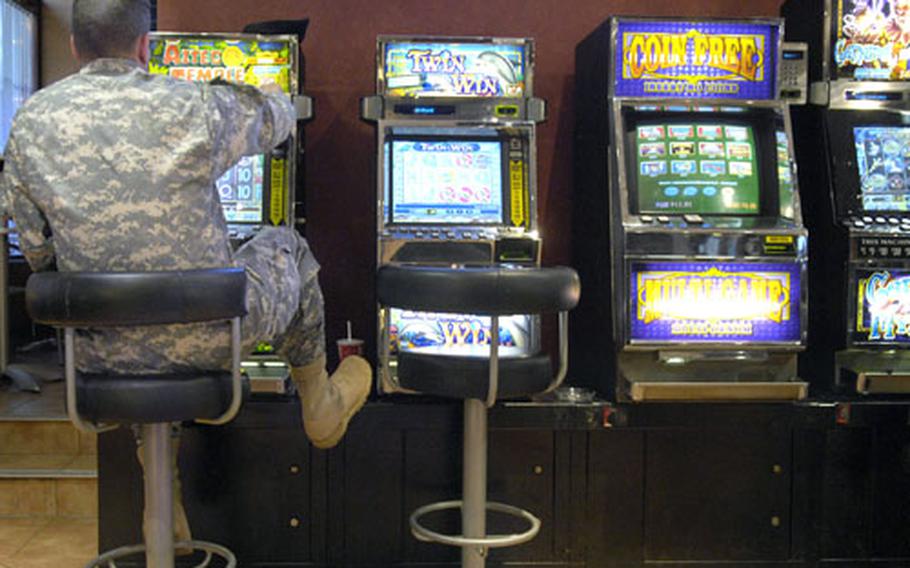 A soldier tries his luck at one of the slot machines Dec. 17 at the Striker’s Bowling Center in Baumholder, Germany. (Ben Bloker / S&S)

A soldier tries his luck at one of the slot machines Dec. 17 at the Striker’s Bowling Center in Baumholder, Germany. (Ben Bloker / S&S) 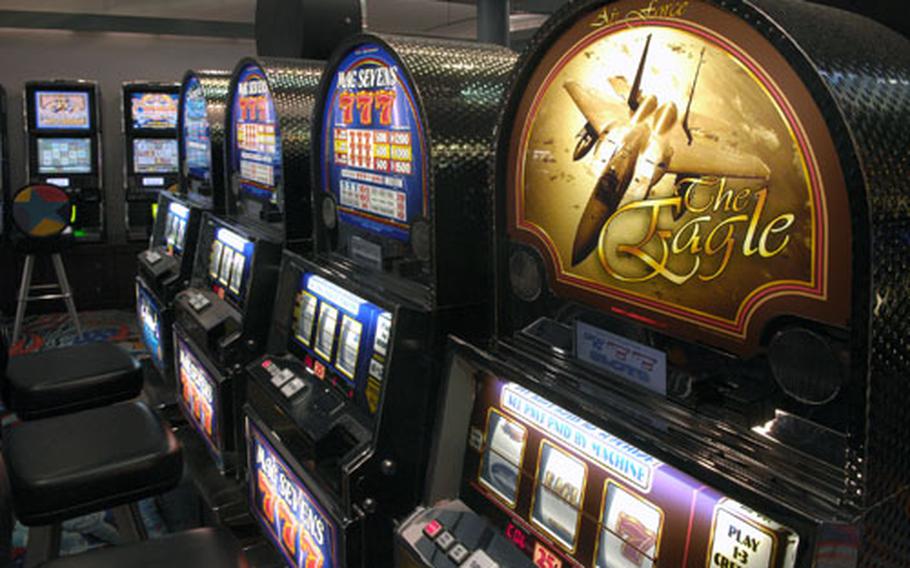 &#8220;The bowling alley was next door to where I worked; I started going in to eat lunch and started dropping a few coins in the machines,&#8221; said the senior noncommissioned officer, who asked that her full name not appear in print. &#8220;I won a few times; next thing you know, I was going to the bowling alley every day for lunch, and then after work.&#8221;

Carol believes she has a gambling problem, but is reluctant to seek counseling on base because she fears that her superiors may distrust or demote her if they learn about her mistakes.

The price of gamblingSlots and video gambling at overseas bases brought in about $185 million for Morale, Welfare and Recreation programs last year.

But Tennessee Rep. Lincoln Davis believes that money comes at a higher price.

Davis, a Democrat, is behind a new congressional push to ban gambling at overseas military bases because of what he feels is its inherently addictive nature. The Southern Baptist admits that he opposes gambling on moral grounds, but insists that&#8217;s not the issue behind his latest efforts.

Military officials disagree, pointing to a 2001 Pentagon study which asserts that overseas gambling &#8220;does not have a negative effect on the morale or financial stability of our forces.&#8221; While the study acknowledged cases of individuals with gambling problems, the study showed no systemic problems with having slots on bases.

All stateside bases and those in U.S. territories Guam and Puerto Rico are banned from installing games of chance, but, combined, the four services operate more than 5,400 gambling machines at overseas military facilities.

Service officials said profits collected represent a small but important portion of MWR funds, paying for things such as free Internet access, youth sports, and equipment purchases at local bases. It also covers costs of minor renovations and in some cases major construction of recreation facilities.

Addiction or distraction?Defense officials said money isn&#8217;t the only issue.

Quoting the 2001 study, Defense spokesman Lt. Col. Les&#8217; Melnyk said the goal of the machines is to &#8220;provide both a recreational opportunity to servicemembers and adult family members overseas and also a source of revenue to improve Morale, Welfare and Recreation programs worldwide.&#8221;

He compared the slots parlors to video arcades, movie theaters, bowling alleys and other MWR options overseas and said officials work to make sure all the entertainment programs are run fairly and responsibly.

Slots and games of chance were first made available at overseas military bases in the 1930s and 1940s, but were banned by the Army and Air Force in the early 1970s because of allegations of corruption and mismanagement.

Less than a decade later, both services began pilot programs to see whether slots and the MWR funds they brought in could be reintroduced in Europe and the Far East.

Department of Defense health behavior studies in 1998, 2000 and 2002 all found between 5 percent and 9 percent of military personnel had experienced a gambling-related problem in their lifetime, and about 2 percent (about 30,000 of the total force at the time) fit the classification for pathological gambling problems.

The Pentagon stopped tracking that statistic in its periodic health reviews after 2002, and the study conducted a year earlier by MWR officials found slot machines posed no significant threat to the force.

But John Kindt, a University of Illinois business professor who has studied the gambling industry and focused on the military in recent years, said that to compare watching a movie with risking one&#8217;s paycheck on video poker is to minimize the danger of gambling.

&#8220;If they got rid of the machines, there would still be some with serious problems who go off base or get involved in back-room poker games. But just having them there, you get some people addicted who never would have had a problem otherwise.&#8221;

Looking for helpIn a report to Congress a year ago, Kindt lobbied for banning all overseas gambling because the potential pitfalls outweighed the &#8220;minimal benefits&#8221; of entertainment and extra MWR funds.

He said Defense officials have not done enough in recent years to ensure that addiction counselors and help programs like Gamblers Anonymous are available at bases with slots, and the absence of such services makes it easier for troops to slide from casual gambling to serious gambling problems.

In the past two years, two Navy inpatient programs dealing with gambling addiction &#8212; one in California, one on Okinawa &#8212; were closed.

But service officials said numerous resources are still available to troops or families who think they may have a problem.

David DuBois, family support programs deputy for Naval Installations Command, said all Navy family centers worldwide provide some treatment options or referrals on gambling issues. And commanders have the authority to refer servicemembers to counseling at any sign of financial misconduct.

Marine Corps officials said their anti-addiction efforts include financial training and debt management assistance for all servicemembers. Kenneth Pruitt, spokesman for Air Force Personnel Command, said along with the gambling counseling programs available at local bases, &#8220;we instill a culture of responsibility&#8221; among airmen to help them avoid addiction problems.

Army officials declined requests to comment on their anti-addiction efforts.

Carol, the soldier who spent $21,000 at the slots, said the ease of access to the gaming machines and the lack of a nonmilitary anti-gambling program have contributed to her problems.