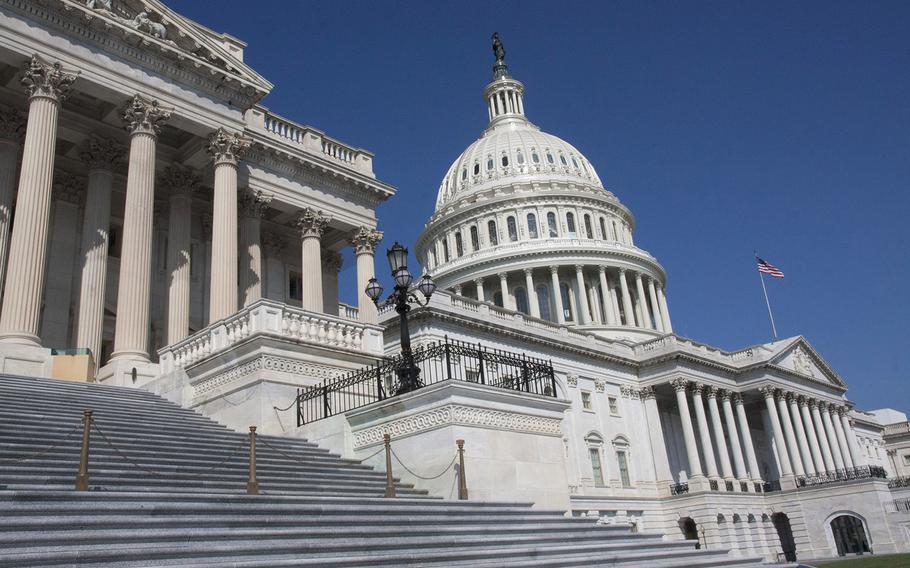 Chairman of the Senate Armed Services Committee Sen. John McCain, R-Ariz., speaks during a hearing on Capitol Hill on Thursday, Sept. 15, 2016. Ranking Member Sen. Jack Reed, D-R.I., at right, said money remains a "significant issue" as lawmakers in Congress indicated Friday that they will not finish an annual defense budget bill by the end of the month. (Carlos Bongioanni/Stars and Stripes)

WASHINGTON – Congress will not finish an annual defense budget bill this month, putting off a decision on a controversial $18-billion spending hike until after the November election, according to sources familiar with negotiations.

The House and Senate have broken off negotiations after being unable to reach a deal on the sprawling National Defense Authorization Act, which has become a battleground over the proposal to boost spending for more military hardware, troops, training and higher pay.

House Republicans are pushing to take the $18 billion out of the Islamic State group war fund, saying the military is overstressed and needs to invest the money in daily operations. But the Senate has rejected the proposal, which faces strong Democratic opposition and would cause deployed forces to run out of money in April.

The money remains a “significant issue,” Sen. Jack Reed, D-R.I., the ranking member on the Armed Services Committee and a top negotiator of the NDAA bill, told Defense News on Thursday.

Several sources close to the negotiations confirmed that work on the bill will not be completed before the current defense budget expires at the end of the month and lawmakers leave Washington to campaign ahead of the presidential election.

Any future deal reached by the negotiators named by Congress’ two armed services committees must still pass final votes in the House and Senate and be signed by President Barack Obama, who has threatened to veto the NDAA over the $18 billion and other issues.

Meanwhile, Congress was set to consider another stop-gap budget measure to keep the current levels of defense spending flowing after Sept. 30.

The Senate was set to take up legislation to carry the military and federal government through Dec. 9.

In May, the House approved an NDAA bill that included taking the $18 billion from the overseas war fund and using it for new equipment like ships and aircraft, higher troop levels, more training, military facility improvements and the bump in troop pay raises.

The House version blocked the Army from cutting another 15,000 soldiers as part of a multiyear drawdown and instead proposed adding 5,000.

Troops would also get a 2.1-percent pay raise – the highest in years -- instead of the 1.6 percent raise ordered last month by Obama. Raises have been kept below private sector wage growth since 2010 as the Obama administration attempts to save money.

The increased funding plan, which was spearheaded by Rep. Mac Thornberry, R-Texas, the chairman of the Armed Services Committee, would require a divided Congress and the next president to come together in April to approve a rare mid-year budget bill to keep the war funded.

It is an end run around defense budget spending caps that Congress passed in 2011 but has been unable to repeal, despite widespread frustration, due to deep political divisions. Those caps are set to remain for the next five years unless a deal is reached.

The military service chiefs testified to the Senate on Thursday about overstretched forces that are unready to fight major wars and need more money. But the Pentagon and White House have repeatedly called Thornberry’s plan a “gamble” that would endanger deployed troops and warned against the move.

The Obama administration wants a deal by Congress to lift the defense spending caps.

The Senate sided with the administration earlier this year and rejected an $18-billion hike in its NDAA, despite an impassioned floor plea by Sen. John McCain, R-Ariz., who is the Armed Services Committee chairman.

Thornberry and McCain had been leading negotiations on a compromise NDAA bill since Congress returned this month from a summer recess.