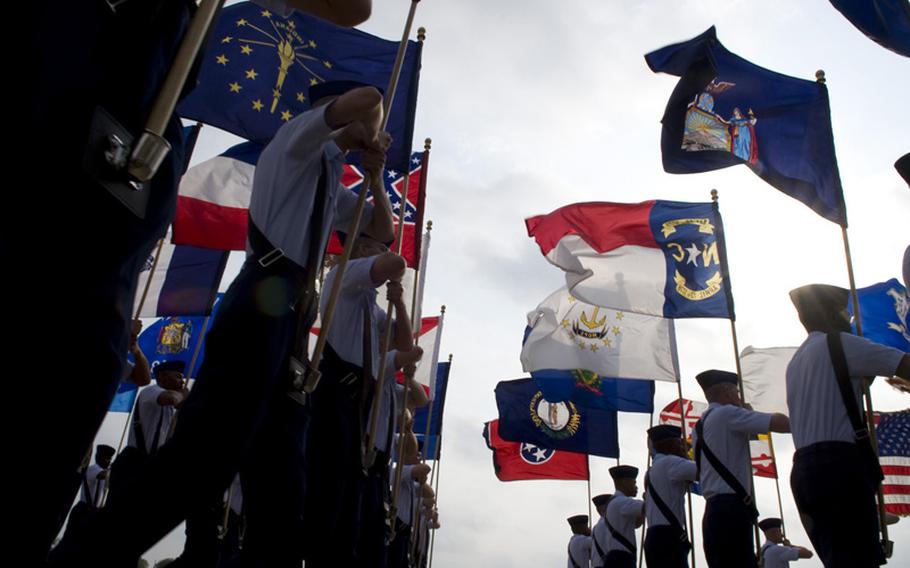 Basic trainees march on the parade grounds holding state flags during their graduation ceremony in Arpil 2009 at Lackland Air Force Base, Texas, where where at least 31 recruits reported being sexually assaulted by instructors. (Cecilio Ricardo/U.S. Air Force)

WASHINGTON — As the military struggles to eliminate its sexual assault epidemic, Congress has included a record number of provisions in this year’s National Defense Authorization Act that address sexual violence.

In 2011, 3,192 incidents of sexual assault were reported in the military. Yet, according to the Department of Defense, this figure may significantly underestimate the actual number of sexual assaults, which may be closer to 19,000 annually.

The NDAA, signed into law by President Barack Obama on Jan. 2, lays out Congress’ defense requirements for the year. Provisions this year included 19 that deal with military sexual assault.

Advocates say one of the biggest victories was the creation of an independent review panel that will closely examine the way the Defense Department investigates and prosecutes sexual assault cases.

The five-person review board, composed of civilians, will examine sexual assault cases and make reports and recommendations on how the military should prosecute these crimes. The precedent-setting move is significant because it allows judicial review of the Uniform Code of Military Justice by civilians.

Although the military has a similar oversight panel, the Joint Services Committee is made up of legal experts from within each branch of the armed forces. “Its job is not to reform the UCMJ but to make sure that it stays constitutional,” said Greg Jacob, policy director for Service Women’s Action Network, a New York City women veterans’ rights advocacy group.

The Secretary of Defense would appoint private citizens to the panel, who would have expertise in the prosecution of sexual assault in both military and civilian law. It would meet every six months and look at individual cases and provide feedback on how the cases are prosecuted.

“It’s a great idea,” Jacob said, “because of the insular nature of military law, it’s always a good idea to bring the light of day to it.” The panel will also examine how the military’s laws and justice system reflect current legal thought and theory.

The UCMJ’s last major overhaul was in the 1980s, when it was rewritten to incorporate federal rules of evidence, he said. “Some kind of reform — some kind of regular examination — is definitely warranted because it’s a closed system.”

But unless the panel’s recommendations are championed by Congress and the Pentagon from the top ranks down, the panel could exist as “a paper tiger,” Jacob said, unable to affect real change.

“There are too many victims that come forward and have felt revictimized,” said Turner, who has called for better protection for victims and prevention of military sexual assaults. “We need to treat sexual assault in the military like the crime it is.”

For example, the right to unrestricted, expedited transfer of an assault victim so that he or she can quickly and safely leave the unit was approved in last year’s NDAA.

“But what we are finding is happening on the ground is [victims] are told no such thing exists,” she said. “They are told they are not qualified for it, or they are put in medical hold,” placed in hospitals for evaluation, so they must remain in their unit for months.

Problems will remain, Parrish said, as long as decisions on whether to punish such actions reside in the unit’s chain of command. Those decisions need to be made by an impartial, unbiased party outside the chain of command, advocates say, and by a civilian justice system.

“Half-measures will not remove the bias, the conflict of interest and the abuse of authority” within what Parris calls “the broken military justice system.”