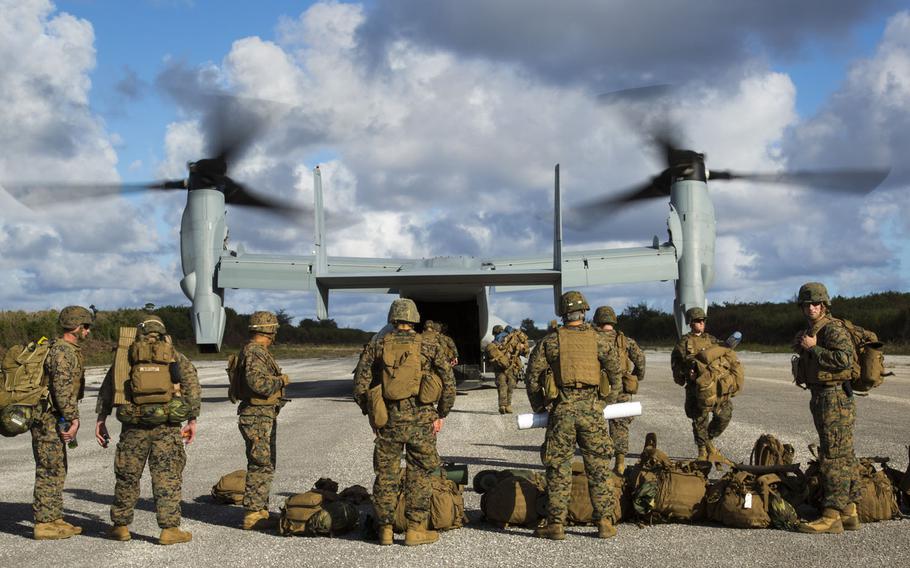 An MV-22B Osprey disembarks Marines Dec. 9, 2013 at Baker runway on Tinian's North Field during Exercise Forager Fury II during training on Guam and within the Mariana Island Range Complex. A defense budget proposed this week by the House and Senate would continue to restrict spending on the relocation of Okinawa-based Marines to Guam and Hawaii as part of a military realignment in the Pacific. (Antonio Rubio/U.S. Marine Corps)

CAMP FOSTER, Okinawa — A defense budget proposed this week by the House and Senate would continue to restrict spending on the relocation of Okinawa-based Marines to Guam and Hawaii as part of a military realignment in the Pacific.

The National Defense Authorization Act requires the military to complete environmental studies on the U.S. territory and create a master plan for the overall redeployment of forces before Congress will allow any major spending on the $12.1 billion realignment, according to the legislation published Monday.

The Senate has repeatedly criticized the Department of Defense effort to beef up and redistribute forces in the region for its high cost and lack of planning. Powerful lawmakers such as Sen. John McCain, R-Ariz., and Sen. Carl Levin, D-Mich., have spearheaded the effort to block nearly all federal spending over the last few years.

House and Senate committees merged competing versions of the 2014 defense budget in hopes of getting the bill passed before the end of the year, according to the House Armed Services Committee.

Despite early media reports, the Senate appears not to have relented in its criticism and hard stance on realignment oversight.

In August, McCain visited Japan and reiterated concerns over the move to Guam and Hawaii. The U.S. Government Accountability Office also issued a second warning earlier this year saying the Pacific realignment plans were not being adequately planned and that not all potential costs were being considered.

The project would move about 4,000 of the roughly 19,000 Marines stationed at U.S. bases on Okinawa to new facilities on Guam. The move is to be partly funded by Japan because it could reduce the large — and controversial — concentration of American forces in the country’s southernmost prefecture.

Another 2,000-3,000 Okinawa Marines may be relocated to Hawaii, though the Department of Defense has not released any final troop or price figures for that part of the realignment plan.

The redistribution of Marines is central to the Obama administration security strategy of shifting U.S. military forces to the Pacific as China seeks more influence and the wars in Iraq and Afghanistan come to a close.