Congress squeezed on time to decide on military action in Syria 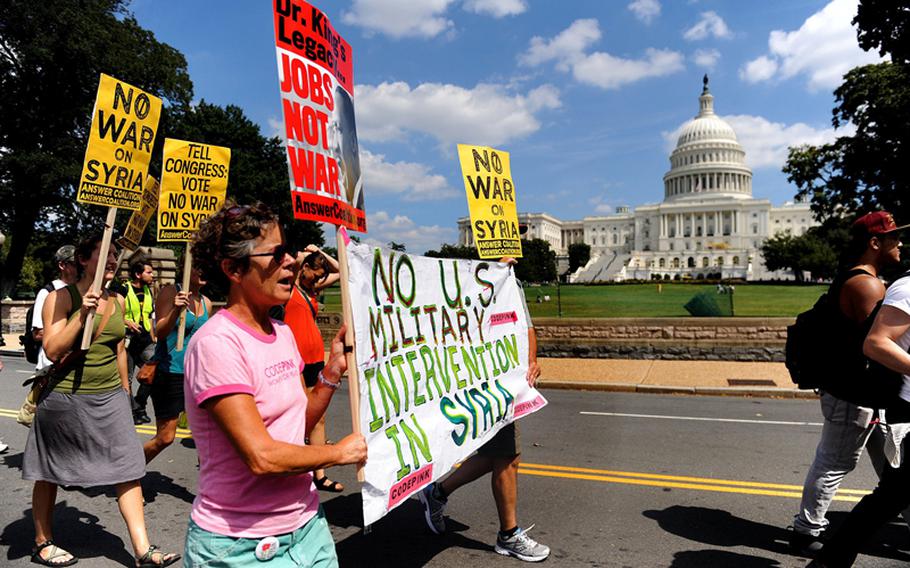 Hundreds of demonstrators protest against the U.S. intervention in Syria outside the U.S. Capitol in Washington, D.C., Saturday, September 7 2013. (Olivier Douliery/Abaca Press/MCT)

The U.S. House and Senate return to work this week after a five-week recess to face a mountain of leftover issues and one all-important new one: Whether to authorize a military strike against Syria, as President Barack Obama has requested.

In traditional congressional fashion, lawmakers have left themselves less than a week and a half of working days to debate and vote on a Syrian resolution before turning to other pressing matters. Those include raising the debt ceiling, passing or continuing the federal budget and deciding whether to continue or end the forced federal budget cuts known as sequestration — all of which must be done by Sept. 30, the end of the fiscal year.

But it is Syria which will initially dominate Congress’s attention. The House Armed Services Committee will convene Tuesday to decide whether to follow the lead of the Senate Foreign Relations Committee, which last Wednesday voted 10-7 for a military strike resolution. The resolution sets a 60-day expiration date for any action, with an option for an additional 30 days. It also prohibits the use of U.S. ground troops against Syria.

Obama has scheduled a national, prime-time television address for Tuesday to lay out his case. Earlier that day, Defense Secretary Chuck Hagel will testify before the House Armed Services Committee, along with Gen. Martin Dempsey, chairman of the Joint Chiefs of Staff. Both men testified last week before House and Senate committees along with Secretary of State John Kerry.

Public opinion polls show Americans are split on the idea of military action. Obama last month cited research and reports that said the regime of Syrian President Bashar al-Assad carried out a sarin gas attack Aug. 21 in a Damascus suburb that killed more than 1,400 of his people. A British investigation has confirmed that allegation.

Curtis Gans, director of the Center for the Study of the American Electorate at American University in Washington, said most Americans carry an “underlying fear” about involvement in another Mideast war. Specifically, Gans said resentment over the faulty intelligence that led to the war in Iraq in 2003 is still prevalent.

“The country feels very burned by the wars in Iraq and Afghanistan,” Gans said. “Right now, Congress is more hostile than supportive of action, but ultimately that can be turned around if a joint resolution is [limiting] enough. It is probably a disservice to the country if Congress prevented (Obama) from doing anything. It may be that they need to delay the votes to get support.”

Delaying a vote on Syria, however, could make more burdensome an already-compressed congressional calendar. Because Mondays and Fridays are considered travel days for congressmen, the House and Senate usually work a three-day week. Since the House isn’t even in session the week of Sept. 23, the last week of the month before the fiscal year ends, it has only nine working days on the schedule. The crush of legislation will likely be worse in the House, too, because it has not even begun debating the issue of Syria as the Senate has.

The Obama administration has conducted a variety of briefings and conference calls during the congressional recess to try to convince lawmakers of the chemical attack and win support for a military strike authorization, even though Obama has asserted that he has the authority even without approval from Capitol Hill. While a congressional vote is far from certain, his position has been strengthened in recent days by statements of support from some of Congress’ prominent Republicans — Sen. John McCain of Arizona, House Speaker John Boehner of Ohio and House Majority Leader Eric Cantor of Virginia, among others.

But many observers say much more still needs to be done to make a convincing case for action.

“These kind of things normally require a buildup,” said Ross Baker, a political science professor at Rutgers University. “The counternarrative is that this is a religious civil war, and arguing that the U.S. has any business in it at all, even if there’s not ground forces, is a very, very tough case to make.”

In August 2012, Obama said in a press conference that “a red line for us is we start seeing a whole bunch of chemical weapons moving around or being utilized” that would “change my calculus” on the possible use of American military might. Since then, the administration has been providing nonmilitary aid and some training to the rebels fighting Assad’s regime but has resisted entering the conflict militarily.

Baker compared Obama’s situation to that of President Franklin Roosevelt, who in the fall of 1940 nearly lost a congressional vote to extend the draft during World War II.

“It’s a problem presidents have always had,” Baker said. “Presidents sometimes just don’t lay the groundwork. In this case, having made his ‘red line’ statement, Obama should have been laying the groundwork before he even used that term.”