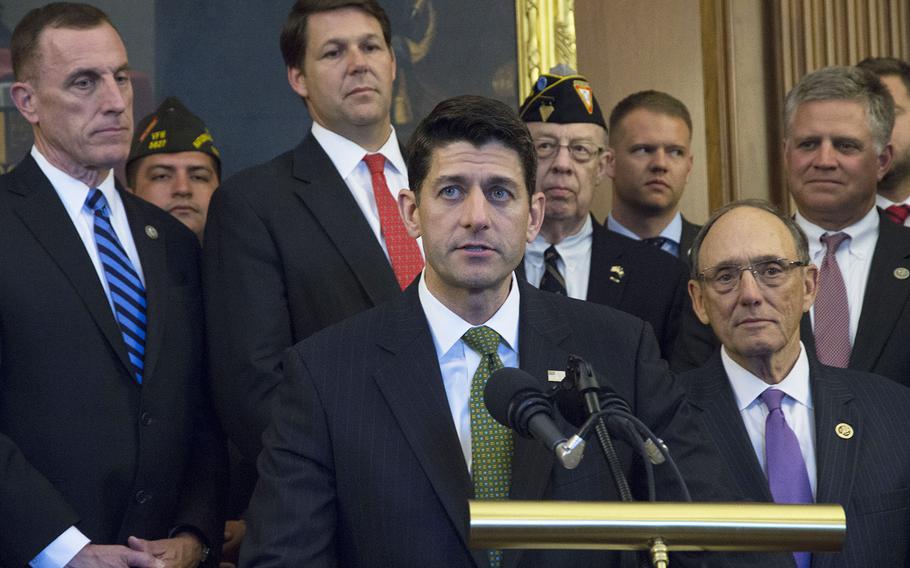 Buy Photo
Backed by members of Congress and representatives of veterans' service organizations, House Speaker Paul Ryan speaks at a press conference on Capitol Hill following the passage by the House of the Department of Veterans Affairs Accountability and Whistleblower Protection Act, June 13, 2017. (Joe Gromelski/Stars and Stripes)

Buy Photo
Backed by members of Congress and representatives of veterans' service organizations, House Speaker Paul Ryan speaks at a press conference on Capitol Hill following the passage by the House of the Department of Veterans Affairs Accountability and Whistleblower Protection Act, June 13, 2017. (Joe Gromelski/Stars and Stripes) 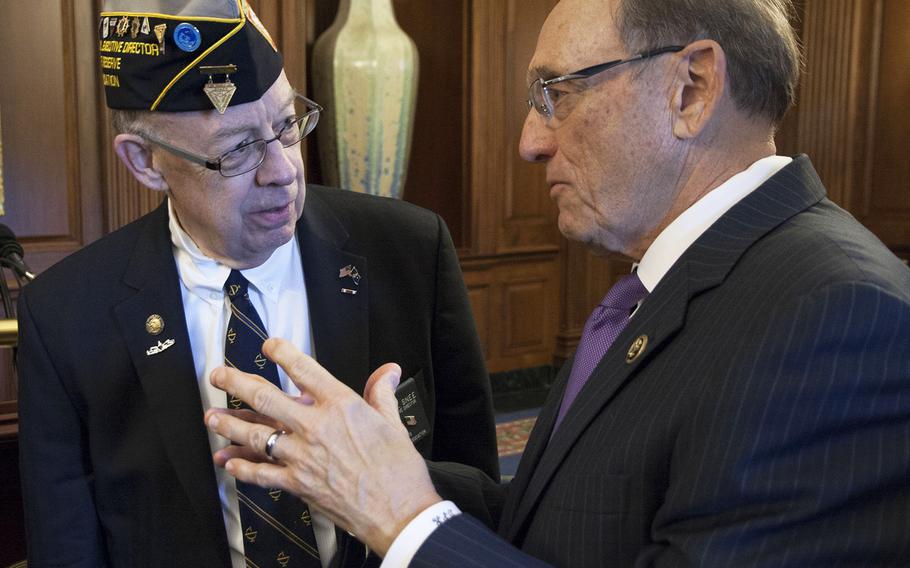 WASHINGTON — Three years after scandal rocked the Department of Veterans Affairs, a bill creating more repercussions and a quicker firing process for poor-performing VA employees will go to the president’s desk.

The House voted 368-55 Tuesday to pass S. 1094, titled the Department of Veterans Affairs Accountability and Whistleblower Protection Act of 2017. The bill was part of President Donald Trump’s 10-point plan to reform the VA, which he has called the “most corrupt” federal agency.

The bill has broad support from veterans service organizations that see it as a way to root out a perceived culture of corruption in the department, and VA Secretary David Shulkin said it was necessary to fix a “broken” accountability process.

“Once President [Donald] Trump signs this into law, I predict we will see the culture change at the VA, and our veterans will get the care we promise them and they deserve,” said House Majority Leader Rep. Kevin McCarthy, R-Calif.

There was little dissent about the bill Tuesday on the House floor. Most of the lawmakers who spoke about it called it a “good bill” and a bipartisan compromise.

“The way this was done is the way we were taught in school it was supposed to work,” said Rep. Tim Walz, D-Minn., the ranking Democrat on the House Committee on Veterans’ Affairs. “It’s not perfect in everyone’s mind, but it is certainly perfect in terms of how legislation is done. Everyone compromised.”

The House Republican Conference, with veterans groups, held a news conference Tuesday evening in a reception room at the Capitol. House Speaker Rep. Paul Ryan, R-Wisc., Rep. Phil Roe, R-Tenn., McCarthy and other lawmakers and veterans gathered to celebrate the vote and took turns at the podium.

“We know exactly what the negative impact of weak accountability looks like,” said Carl Blake, who works with Paralyzed Veterans of America.

“No more will inaction, bad action or underperformers be tolerated at the VA, as they have been for far too long. We can see real effective change at the VA. We expect nothing less. We do not want to see this opportunity get wasted."

Walz’s office preempted the Republican celebration Tuesday by saying they were concerned Trump and Republican leadership would misrepresent the bill’s passage as a Republican win over Democratic obstruction.

“Unfortunately, it is not outside the realm of possibility that President Trump, his administration and Republican leadership intend to label this as a major legislative victory despite Democratic obstruction, however any suggestion that Democrats obstructed the passage of this bill is patently false,” said Griffin Anderson, Walz’s press secretary.

“Congressman Walz has been a central figure in the effort to pass VA accountability.”

A constitutional fix On average, it now takes 51 days for the VA to remove an employee, largely due to a 30-day notice period, Shulkin has said. At the end of May, there were 1,500 VA employees who had received notice of their termination but were still on the payroll.

The current disciplinary process meant the VA had to wait more than a month to fire a Houston psychiatrist who was caught watching pornography in front of a patient. It also mandated the VA allow an employee in Memphis, Tenn., to return to work last month after she was convicted of her third driving-while-intoxicated charge and spent 60 days in jail.

The legislation would cut the 30-day advance notice period to 10 days. It would also speed up the process that employees use to appeal any disciplinary action against them. It lessens the evidentiary standards required to fire an employee, and it allows the VA secretary to recoup bonuses and relocation expenses in certain instances.

It also allows the VA secretary to directly appoint directors to lead VA hospitals and integrated service networks, instead of going through lengthy hiring processes.

Frustration over bureaucracy in the agency has grown since 2014, when it was discovered veterans were waiting for care and VA employees had manipulated wait-time data.

Since then, some efforts to punish employees have failed.

The Merit System Protection Board, which hears employees’ appeals, reversed the VA’s decisions to punish three VA senior executives, including two of them who were found to move themselves to positions with less responsibility while maintaining the same salary.

Last month, the U.S. Court of Appeals for the Federal Circuit ruled the firing process that the VA used to fire the director of the Phoenix VA Health Care System in 2014 was unconstitutional. The ruling upheld a petition from Sharon Helman, who was director of the hospital when whistleblowers disclosed veterans seeking care in Phoenix were languishing on secret wait lists. The VA inspector general later confirmed some veterans died because of the delays.

The legislation passed Tuesday was reviewed for constitutionality by the Department of Justice, Meghan Flanz, acting general counsel at the VA, told a Senate committee. The bill’s sponsors said it finally provides a constitutional way to remove bad VA employees.

“Today, we stand together with veterans against a status quo that’s failed them for far too long,” said Roe, chairman of the House Committee on Veterans’ Affairs and sponsor of the original House bill.

Lawmakers and veterans commended Democrats and Republicans on the House and Senate veterans’ affairs committees for working together on the legislation, especially during a time of little bipartisan agreement. The House already passed a VA accountability bill in March, but the vote was split along party lines. Democrats argued it went too far to weaken employees’ due process rights.

One week ago, the revised version of the bill passed the Senate, where previous accountability bills had stalled in 2015 and 2016. The legislation was a compromise between parties that added back in some workforce protections.

On June 6, Trump tweeted, “The House should get this to my desk ASAP!” Rep. McCarthy responded the next day promising, “It will be on your desk next week.”

“We are impressed by the speed by which Congress acted to move this critical legislation forward to the president’s desk in a bipartisan manner,” American Legion National Commander Charles Schmidt said in a statement.

Unions remain opposed Concerned Veterans of America has spent millions of dollars lobbying for the legislation since 2013. CVA is a conservative-leaning advocacy group reported to be associated with the Koch brothers’ political network.

The group celebrated the bill’s passage Tuesday evening. “It’s taken many different versions of the bill working its way through Congress and years of activist engagement to get this measure passed,” said CVA Policy Director Dan Caldwell. “This measure will incentivize employees within the VA to be more customer-focused.

They’ll now know that there will be consequences when they engage in misconduct.”

While the legislation speeds up the firing process only for VA employees, Caldwell said it can serve as a road map for civil service reform across the federal government.

Trump campaigned with a promise to “drain the swamp,” meaning the federal workforce in Washington. J. David Cox, president of the American Federation of Government Employees, a federal union representing about 220,000 VA employees, has said federal public servants are “under constant attack.”

Cox fought against the VA accountability bill at every step, and a few dozen members wore their union T-shirts to committee hearings on the bill over the past month. In a quip alluding to Trump’s tagline on the television show “The Apprentice,” Cox spoke at one hearing against creating a culture of solving problems by telling workers, “you’re fired.”

In a statement Tuesday afternoon, Cox said Congress should instead be focusing their attention on filling vacancies within the agency.

“The VA’s first, second, and third priorities should be filling the 49,000 vacant positions currently on the books,” he said. “Until these positions are filled and veterans are getting the excellent VA care our nation promised to provide, there shouldn’t be any other priorities.”

The bill’s sponsors and supporters have remained adamant the new firing rules would not lead to at-will firing of good VA employees or lowered morale, despite Cox’s concerns.

“The vast majority of VA employees are hardworking public servants who are dedicated to providing quality health care and benefits for veterans, but for too long the failures of bad actors have tarnished the good name of all VA employees,” Roe said. “Despite the tireless efforts of our whistleblowers… and outrage of the American public, we still see far too many instances of employees not living up to the standards America expects.”