Congress' message to DOD: No BRAC for now, but cut more in Europe 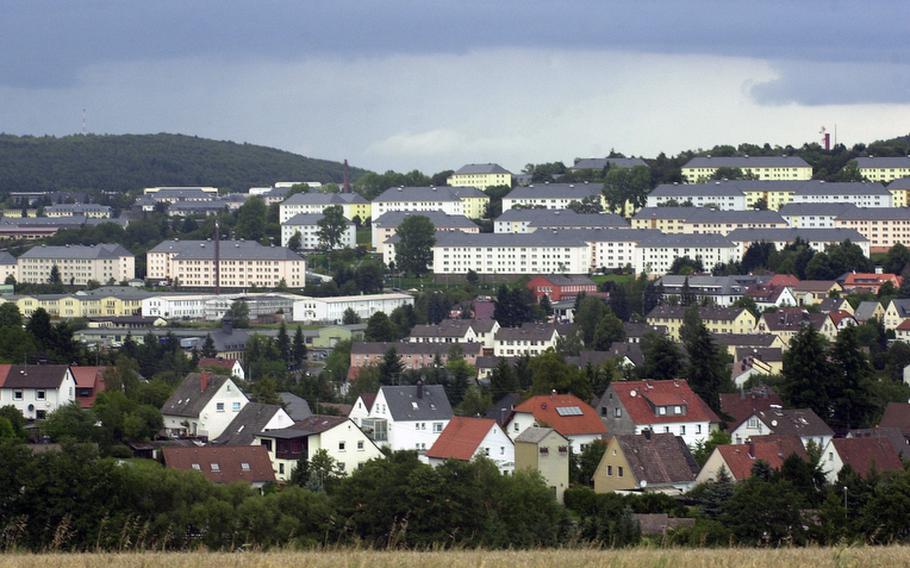 Buy Photo
Smith Barracks dominates both Baumholder's otherwise rural setting and its financial health. Earlier this year, the Pentagon said it would inactivate the 170th Infantry Brigade in Baumholder, though there are no plans as yet to shut the garrison. Though decisions about base closures overseas are not directly part of the BRAC process, Pentagon assessments of foreign bases are done in tandem with assessments of domestic bases. (Stars and Stripes)

STUTTGART, Germany &mdash; Overcoming stiff opposition on Capitol Hill to any new round of U.S. base closures and realignments could hinge on how ambitious Pentagon plans are for closing more military facilities in Europe.

The bolder the proposals for Europe, the better the chances of persuading lawmakers to endure two rounds of base realignments and closures (BRAC) at home as proposed for 2013 and 2015, some military experts say.

Pentagon officials and senior commanders in Europe are drafting a new consolidation plan for Europe installations. The plan will contain a set of recommendations for Defense Secretary Leon Panetta to consider later this year, according to senior defense officials.

&ldquo;We definitely believe we can do more to consolidate in Europe,&rdquo; Dorothy Robyn, deputy undersecretary of defense for installations and environment, told lawmakers during a recent hearing on BRAC before the Senate Armed Services Committee.

Robyn, however, stopped short of naming what facilities are under particular scrutiny. Military officials have said only they are looking at a wide range of facilities.

&ldquo;First, we can reduce the number of discrete installation sites we maintain in Europe,&rdquo; Robyn stated in testimony to Congress in March.

&ldquo;We have more than 300 such sites &mdash; ranging from small communications posts to robust Main Operating Bases &mdash; of which about 200 house most of our activities.&rdquo;

Excess support infrastructure such as warehouses, administrative space and housing also are being looked at, she said.

While the Pentagon has made clear it would like to close more military installations at home, and needs the congressionally authorized BRAC process to do it, several influential lawmakers have come out strongly against any such move. The mantra in Washington has been &ldquo;target Europe first.&rdquo;

It was no different in 2005, when the Pentagon had to offer a detailed justification for every base abroad before congressmen were willing to consider closing bases in the U.S., according to Kori Schake, a National Security Council director of defense strategy and requirements during President George W. Bush&rsquo;s first term.

Schake said she&rsquo;s surprised that the Pentagon didn&rsquo;t conduct its overseas basing analysis before pushing for another BRAC.

&ldquo;That Secretary Panetta placed such a low priority on Europe in his defense guidance will increase lawmakers&rsquo; interest in closing bases there,&rdquo; Schake said. &ldquo;That forces in Europe are being cut, and seem set to be cut further if sequestration comes into effect, will incline Congress not to agree to any domestic base closures until they see the plan for how force cuts will be distributed geographically.&rdquo;

The last time Congress authorized a BRAC commission was in 2005. Nine commissioners appointed by President Bush made a series of base closure and realignment decisions that ended up costing more than $35 billion to execute, according to the Government Accountability Office. Actual savings aren&rsquo;t expected to be achieved until 2018.

While many on Capitol Hill are opposed to additional BRAC rounds in the coming years, Europe is another matter.

Earlier this year, the Pentagon announced that it will inactivate the 170th Infantry Brigade in Baumholder, though there are no plans yet to shutter the garrison that is regarded by the Army as one of its &ldquo;enduring&rdquo; communities in Europe. In place of the brigade, U.S. Army Europe plans to relocate smaller support units to Baumholder rather than close the installation.

Though decisions about base closures overseas are not directly part of the BRAC process, Pentagon assessments of foreign bases are done in tandem with assessments of domestic bases. While domestic bases have lawmakers and communities lobbying on their behalf, facilities in Europe do not.

&ldquo;It&rsquo;s much easier to reduce installations overseas than it is anyplace that has (congressional) representation,&rdquo; said retired Maj. Gen. Mike Jones, an adviser with the Spectrum Group, a firm that specializes in assisting communities targeted during the BRAC process. &ldquo;That&rsquo;s the path of least resistance, but that doesn&rsquo;t necessarily make it the best choice for the nation.&rdquo;

During the base structure review in 2005, Schake said, a range of criteria was used to evaluate overseas bases.

Such factors could offer a glimpse into how the Pentagon is looking at Europe today.

According to Schake, key questions in assessing value of overseas installations include:

Does it contribute to executing war plans and more rapid response?Are forces located where they can train and where they can train militaries of important partners?Does basing contribute to regional stability for U.S. allies?Do domestic bases exist that could serve as cost-effective alternatives?Going forward, as the Pentagon looks for more places to consolidate, which facilities might be prime targets?

&ldquo;I don&rsquo;t know that there&rsquo;s anything that makes anything untouchable, or BRAC-proof,&rdquo; Jones said. &ldquo;But there are things that are very difficult to replace &mdash; from the Army&rsquo;s perspective, large maneuver areas that don&rsquo;t have environmental problems and have good ranges.&rdquo;

Overseas, there are additional intangible factors to consider, such as diplomatic implications of a closure, which are hard to measure, Jones said.

Given budgetary pressures, plans for downsizing the overall force and a desire in Washington to see more base closures abroad than at home are all factors.

&ldquo;My gut feeling is that it&rsquo;s caused the military to take a hard look and see if they have it right (overseas) or if there is more to do,&rdquo; said Jones, a former U.S. Central Command chief of staff.

Since the end of the Cold War, the military presence in Europe has gone from a high of 400,000 personnel to roughly 80,000 today. Current transformation plans will drive that number down to about 70,000 troops over the next couple of years. Whether the Pentagon is planning for sweeping changes or modest adjustments remains to be seen. Still, military officials have made clear there is infrastructure to shed.

Robyn, the Pentagon&rsquo;s point person for BRAC, during an appearance before the House Armed Services Committee hearing in March, made clear Europe would be dealt with as part of the push for BRAC.

&ldquo;However, even a significant reduction of our remaining footprint in Europe will not achieve the needed cuts to overall infrastructure,&rdquo; Robyn told lawmakers. &ldquo;Hence, our request for a parallel BRAC process.&rdquo;