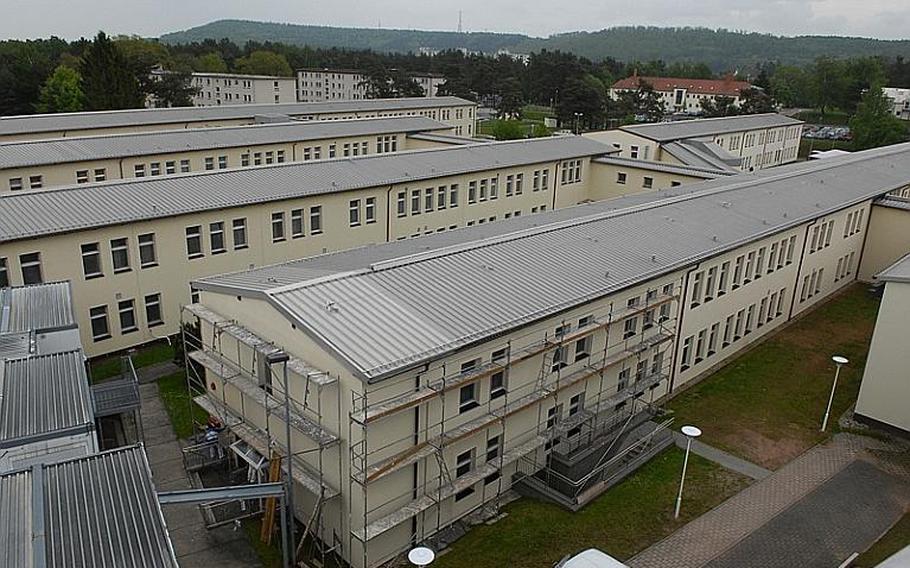 Buy Photo
Landstuhl Regional Medical Center in Germany has a number of wings that were constructed in 1953 and have been refurbished numerous times since. The expansive hospital has three miles of hallways. The Defense Department wants to combine LRMC and the Air Force medical clinic on Ramstein Air Base into one location at an old Army depot near Ramstein in Weilerbach. (Stars and Stripes)

Buy Photo
Landstuhl Regional Medical Center in Germany has a number of wings that were constructed in 1953 and have been refurbished numerous times since. The expansive hospital has three miles of hallways. The Defense Department wants to combine LRMC and the Air Force medical clinic on Ramstein Air Base into one location at an old Army depot near Ramstein in Weilerbach. (Stars and Stripes) 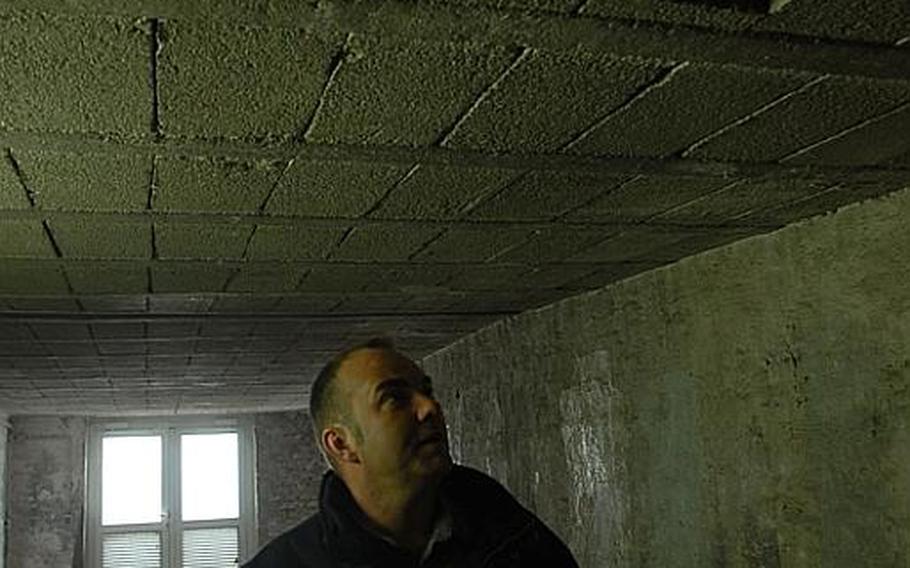 Buy Photo
Joerg Rabung, an assistant maintenance manager contractor at Landstuhl Regional Medical Center in Germany, eyes holes in a utility tunnel entry underneath the hospital where part of the ceiling fell out. A ceiling block also fell in an empty pediatric waiting room. Structural engineers say the hospital is safe, but hospital officials say such work orders are a sign of an aging structure that needs to be replaced. (Stars and Stripes file photo)

KAISERSLAUTERN, Germany &mdash; In the wake of troop withdrawals and the need to cut spending, Congress is asking the U.S. military to reassess plans to build a new hospital to replace the aging facilities at Landstuhl Regional Medical Center, what has been the first stop for wounded troops from the wars in Iraq and Afghanistan.

&ldquo;We do not question the need to replace the current hospital; however, we do have questions about the proper scope of the replacement,&rdquo; said Tara Andringa, a spokeswoman for Sen. Carl Levin, D-Mich., chairman of the Senate Armed Services Committee, in an email. &ldquo;We are working with the Department [of Defense] to address our concerns, provide the level of care demanded for our troops and others served by the hospital while remaining good stewards of taxpayer dollars.&rdquo;

A defense budget agreement worked out this week in Washington approved the appropriation of $71 million this fiscal year for the new U.S. military medical center, which is slated to be built at Rhine Ordnance Barracks, less than 10 miles from the Landstuhl facility.

Included in the draft budget is language that requests the DOD to &ldquo;reassess the scope of this project and submit the results of this assessment in the form of an amended fiscal year 2013 request.&rdquo;

Authorized total funding for the project was reduced in the draft defense budget from $1.2 billion, the amount requested by DOD officials, to $750 million.

The Senate earlier this month approved its version of the defense budget without any funding for the hospital.

When asked about the omission, Andringa said, &ldquo;There was a question regarding the size of the hospital given force posture reductions in EUCOM and the winding down of the wars. EUCOM admitted during briefings that the hospital, as requested by the President&rsquo;s budget, may not be &lsquo;right sized&rsquo; given those factors.&rdquo;

A U.S. European Command spokesman said this week that auditors with the Government Accountability Office are reviewing, among other things, the method for estimating costs to construct, operate and sustain the medical center. The GAO report is expected to be finished by June of next year, said Air Force Capt. John Ross.

There are concerns in the local community, however, about relocating the hospital to Weilerbach.

Landstuhl Mayor Klaus Grumer argues it would be less costly to leave the hospital in Landstuhl.

&ldquo;We know that the hospital needs to be modernized, but you could do this with a fraction of the costs (of a move),&rdquo; he said, since the infrastructure is already in place at Landstuhl.

DOD officials justified their plan to relocate the hospital in a report to lawmakers last year, after the House directed the department to submit a cost assessment for the project with the fiscal 2011 budget request.

The department considered several sites for the new hospital, including the current location, sites on Ramstein Air Base, and the &ldquo;Weilerbach site&rdquo; on Rhine Ordnance Base, according to the report signed by Clifford L. Stanley, former undersecretary of defense for personnel and readiness.

ROB is the desired location because it would allow for consolidation of the Landstuhl hospital and the Ramstein outpatient medical clinic, significantly reduce transport time for wounded warriors arriving on Ramstein Air Base and facilitate integration of related support facilities, such as a warrior transition unit complex, &ldquo;in a comprehensive medical campus design,&rdquo; Stanley wrote.

Also, construction on or adjacent to the hospital while it&rsquo;s still in use would have a negative effect on operations, Stanley said.

Military officials say Landstuhl is the third oldest medical center in the Army and still has many of the original wings built in 1953.